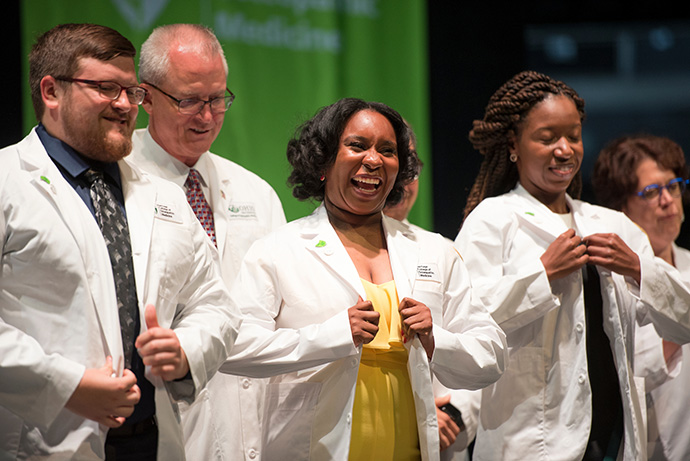 To become a “true healer,” a physician must completely focus on each patient as a human being. That was the advice shared Thursday afternoon with the incoming class of 250 medical students at Ohio University’s Heritage College of Osteopathic Medicine, during the college’s 44th annual Convocation and White Coat ceremony at the Convocation Center in Athens.

“I encourage you to make a concerted effort… in every patient encounter, to turn your total attention to the needs of the patient in front of you,” Ted Wymyslo, M.D., told the college’s class of 2023. “Only then can you become a true healer.”

Wymyslo, chief medical officer of the Ohio Association of Community Health Centers and a former director of the Ohio Department of Health, keynoted the event and was awarded the Phillips Medal of Public Service, the highest honor bestowed by the Heritage College.

As of Tuesday, the college reported having accepted 119 new students at its Athens campus, 62 at its Cleveland campus and 69 at its Dublin campus.

At Convocation, incoming students are given short white coats, indicative of their status as physicians in training. In keeping with this theme, Wymyslo shared a story of his “first white coat encounter,” when he was taken as a child to the local health department.

He recalled initially feeling a bit of fear in the large facility full of people, many of them wearing white coats. But “what I took away from that first visit, when I saw all those white coats, was an appreciation of how kind, caring and compassionate the people were who were behind the white coats,” he said. “What I experienced was an impact so powerful that it catapulted me into a lifelong career in medicine.”

Giving total attention to each patient, Wymyslo said, is “easier to do if you don’t underestimate the impact you can have on everyone you touch. Not because you wear a white coat, but because you let the heart underneath the white coat fully engage with the patient, showing caring, kindness and compassion at every opportunity that arises.”

Andrew D. Williams, a second-year medical student who serves as Student Government Association president at the Heritage College, Athens, echoed Wymyslo’s emphasis on compassion. “The path to becoming the best doctor involves the realization that before patients care to hear how much you know, they want to hear how much you care,” he said.

Thursday’s event was the first Heritage College Convocation for Beth A. Longenecker, D.O., a 1991 alumna recently hired as dean of the college’s Athens campus. She quoted famed medical educator William Osler, M.D. (1849-1919), who urged medical students to cultivate “that which can alone give permanence to power – the grace of humility.”

Ken Johnson, D.O., Heritage College executive dean and Ohio University chief medical affairs officer, noted that the class of 2023 will be only the second trained in the college’s innovative new Pathways to Health and Wellness Curriculum, putting them “on the front lines of important changes in medical education that will drive changes in health care delivery for years to come.”

He also pointed with pride to the facts that 96 percent of the class come from Ohio, 24 percent are from minority backgrounds, and 18 percent are first-generation college students.

Ohio University President M. Duane Nellis, Ph.D., told the students, “You are entering our medical school at a historic time. We are embarking on a renewed era of excellence and unprecedented opportunities for our students, our faculty and the communities we serve.”

Heritage College students from all three campuses gathered in Athens Thursday and Friday for two days of combined activities before returning to their home campuses for additional orientation next week.