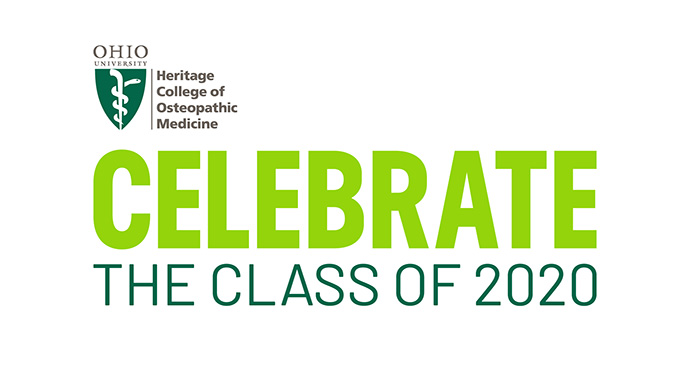 More than 400 people attended the Ohio University Heritage College of Osteopathic Medicine’s virtual graduate awards ceremony on Friday, May 8, as  college leaders, faculty, family and friends joined with members of the class of 2020, whose degrees were conferred on April 18.

Though he joked that he hoped the college’s first-ever virtual awards event would also be its last, Heritage College Executive Dean and Ohio University Chief Medical Affairs Officer Ken Johnson, D.O., added that he was “really grateful that we’re able to have this opportunity to connect virtually” and celebrate the class of 2020’s achievements.

Another speaker, class of 2020 Athens campus class President Dustin Peth, D.O., noted that with the three-campus Heritage College already making much use of teleconferencing to share teaching among all three sites, he and his classmates “are no strangers to seeing each other’s faces on video.” He added that the college’s statewide scope “has allowed us to reach across the great state of Ohio and beyond.”

This event recognized student award winners, graduates going into military residencies and the class’s Primary Care Associates, who spent an additional year at the Heritage College developing their teaching skills and doing research. The online event also gave graduates a chance to recite the Osteopathic Oath, led via video by faculty member Jennifer Gwilym, D.O. (’03), president of the Heritage College Society of Alumni and Friends board of directors.

Following the ceremony, participants were directed to a Class of 2020 Celebration website, where graduates could hear their new title of “Doctor” announced and listen to remarks from speakers from the college and the university. The graduate awards ceremony also was recorded and will be made available online for those not in virtual attendance.

The award winners recognized during the ceremony are as follows:

Graduates committed to medical service with the U.S Armed Forces