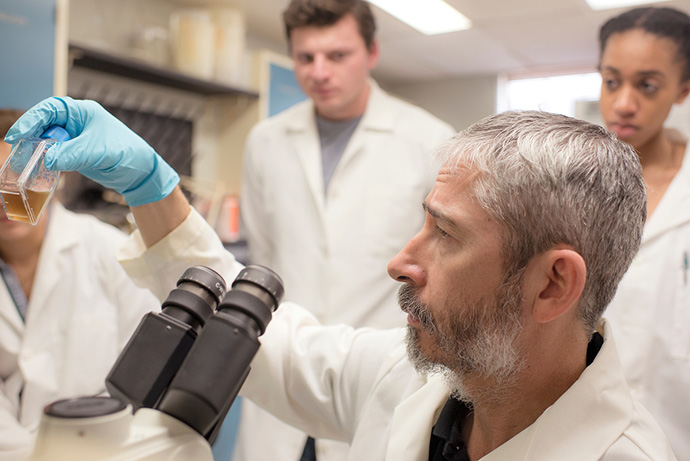 As scientists around the world call for a regional campaign to avert a public health disaster in Venezuela and neighboring countries, a partnership between the Ohio University Heritage College of Osteopathic Medicine and Pontifical Catholic University of Ecuador is proving invaluable to their efforts.

In recent months, the world has watched a long-standing crisis deepen in Venezuela, marked by political turmoil and economic hardship. A less-publicized aspect of the situation is the breakdown of Venezuela’s once-effective public health infrastructure, which has led to a resurgence of many deadly, communicable diseases – an epidemic, scientists warn, that is spilling into nearby countries such as Brazil and Colombia. One of a group of international researchers speaking out on this issue is Mario Grijalva, Ph.D., director of the Ohio University Infectious and Tropical Disease Institute ( ITDI ) at the Heritage College and professor of microbiology.

“If action isn’t taken soon to help Venezuela curb the spread of insect-borne illnesses, the outcome could be catastrophic,” Grijalva said. “The worst-case scenario is the situation continues to deteriorate, the epidemic of diseases continues to expand within Venezuela, and takes the region by storm, overwhelming the capacity of the neighboring countries to contain it. And that would have a regional impact that would be devastating.”

Grijalva, who with the ITDI has long worked to prevent the spread of Chagas disease in his home country of Ecuador, is one of the authors of a new paper in the prestigious medical journal The Lancet Infectious Diseases. The article, “Venezuela's humanitarian crisis, resurgence of vector-borne diseases, and implications for spillover in the region,” collects available data from multiple sources in the region to provide an update on how diseases, including malaria, Dengue, Zika and Chagas, are on the rise in Venezuela and neighboring countries. As refugees flee Venezuela, it notes, they carry disease with them or become vulnerable to infection in new surroundings. And among those fleeing are health care personnel, further darkening the prospects for public health within the country.

The scientists’ declaration has attracted media coverage, including a story by NBC News in which Grijalva is quoted.

The Lancet paper is the work of a long list of scientists hailing from Venezuela, other countries in the Americas and Europe, including lead author Martin S. Llewellyn, Ph.D., of the University of Glasgow in the United Kingdom, and Jaime A. Costales, Ph.D., Ohio University alumnus and faculty at the Center for Research in Health in Latin America ( CISeAL ). CISeAL is a state-of-the-art collaborative research facility in Ecuador, which opened in June 2016 as a joint venture between Ohio University and the Pontifical Catholic University of Ecuador.

“Our partnership with the Pontifical Catholic University of Ecuador is a model of how engaged scientists, health care professionals, students and citizens can collaborate across borders to protect vulnerable populations,” Johnson said. “It makes perfect sense that this partnership would play a role in working to publicize and prevent this potential public health tragedy.”

Grijalva said the contribution of CISeAL, one of Latin America’s premier medical research sites, has been significant. “The coordinator of the network is CISeAL in Ecuador,” he said. “It highlights the importance of having a center like CISeAL and the impact that it has.”

He praised the work of Venezuelan scientists, who he said are putting themselves in danger by helping gather and analyze disease data. “There is a network of public health professionals who are still in the trenches, collecting data and providing education,” he said. “The real heroes of this story are the Venezuelan scientists.”

As the Venezuelan government has allowed official data collection on disease to dwindle, and even, some allege, has actively suppressed available numbers, the international network of scientists has sought to fill the gap through “citizen science” – working to create what Grijalva described as “an informal network of individuals who are serving as the source for the data that should have been collected through official channels but is not being collected.”

Grijalva and his colleagues are also calling for a regional effort to help the Venezuelan people. In a news release from the University of Glasgow, the scientists assert that Venezuela, “once a leader in public health policies and disease control in Latin America, is now facing a re-emergence of many deadly diseases,” with malaria cited as a particular concern.

“In light of their findings, researchers are urging regional health authorities to take action to address these worsening epidemics in Venezuela, in order to aid those affected and to prevent an emerging public health crisis in Latin America,” the release adds.

As an example of what can be done even with limited resources, the Lancet paper cites a cooperative two-country program for the elimination of malaria on the Peru–Ecuador border. When government public health programs break down, it says, disease information can be tracked by mobilizing “citizen scientists and informal networks of health-care professionals… Relevant international health authorities, such as the WHO [World Health Organization] Global Outbreak Alert and Response Network, must also take action to maintain accurate disease surveillance and response systems in the region along with collaboration with other strategic partners to provide timely humanitarian assistance throughout this ongoing crisis.”