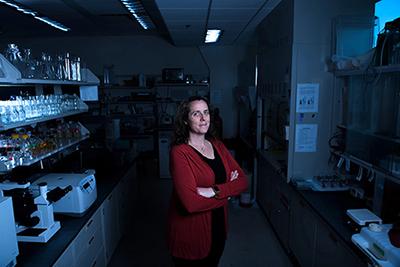 In recently published research into the regulatory mechanisms of a disease bacterium often found in the human body, Ohio University Heritage College of Osteopathic Medicine Associate Professor of Bacteriology Erin Murphy, Ph.D., and her team didn’t find what they went looking for. What they did find, however, opens more research pathways, suggesting science has more to learn about the tools different bacterial pathogens use to adapt to changes in their environment.

Murphy is a member of both the Infectious and Tropical Disease Institute and OHIO’s interdisciplinary Molecular and Cellular Biology Program (MCB). She and her research team – including collaborators from Ohio University, Egypt and Germany – were trying to identify a temperature-sensitive mechanism that regulates gene expression in Staphylococcus aureus. This is the well-known bacterium many people carry in their nostrils that sometimes penetrates further into the body, causing harmful infections.

As S. aureus moves from the nose to inside the body, its surroundings get warmer. In some bacteria, such a temperature increase triggers changes in gene expression that may better equip the germ to survive in its new environment – which is bad health news for the human whose body the staph has invaded.

Looking for a genetic thermometer

Temperature-sensing regulators called “RNA thermometers,” found in the structure of the messenger RNA molecule (which transmits genetic information from DNA), have been discovered in other bacteria. For instance, Murphy and her collaborators have identified such a mechanism in the Shigella bacterium.

They set out to find something similar in S. aureus. Instead, they found a mechanism that responds to temperature changes in the opposite way to RNA thermometers previously encountered – instead of increasing expression of a gene as temperature goes up, this mechanism increased expression as temperature drops. The gene in this case controls production of a protein called CidA.

This is only the second such RNA “thermosensor” – one responding to drops rather than rises in temperature – ever found in a bacterial organism, and the first one found in Staphylococcus. This provides a clue that bacterial pathogens have a wider range of adaptive tools than previously realized.

As Murphy and her co-authors put it in a paper published in the journal Plos One : “In addition to the characterization of the first RNA-based thermosensor in the significant pathogen S. aureus, (this finding) highlights the diversity of function within this important class of ribo-regulators.”

Understanding temperature-responsive regulation of bacterial gene expression raises the possibility that down the line, a drug might be found to lock the thermosensor into its low-temperature setting. If this could be done, it would mean that when S. aureus moved from the nose to warmer places inside the body, the change in temperature would not trigger a change in gene expression, and the bacterium would not benefit from whatever survival advantage that change normally provides.

“This mechanism of regulation is quite amenable to being manipulated,” said Ronan Carroll, Ph.D., OHIO assistant professor of microbiology in the biological sciences department, faculty member at the Infectious and Tropical Disease Institute and MCB, and a co-author on the paper. “About 33 percent of the population has staph in its nose. It doesn’t do you any harm, but it’s well known that it can go from your nose into your body and cause infections. And so if we could develop a molecule that could lock an RNA thermosensor in one format, you could imagine that you could use that as a therapy. Now, that’s a very, very long way down the road from where we are now, but you’ve got to have goals, right?”

Dr. Carroll noted that one requirement for achieving this goal would be a much better understanding of the benefits CidA confers to S. aureus, which currently are unclear. “No one really fully understands what it does,” he said.

Finding a tool other than antibiotics to attack S. aureus is a pressing medical problem. Antimicrobial resistance or AMR – essentially, the phenomenon in which bacterial pathogens rapidly evolve genetic resistance to commonly used antibiotics – is increasingly recognized as a serious public health threat. Methicillin-resistant S. aureus (MRSA) is widespread, with many staph infections now proving resistant to the antibiotic methicillin.

The value of serendipity

Murphy’s research also confirms that in science, studies that give unexpected results can be valuable. Murphy and her collaborators expected to find a classic RNA thermometer in S. aureus ; what they found was significantly different – but interesting. Murphy and her team had provided a computerized version of the S. aureus genome to a researcher at Ruhr University in Bochum, Germany, who designed a computer program to search the genome for likely RNA thermometer sites, based on structural features often seen at such sites. More than 270 possible RNA thermometers were identified, but few have panned out to date. And when Murphy’s team in Athens tested these sites for regulatory changes at different temperatures, they found the unexpected low-temperature correlation.

“One of my students, Hebaallaha Hussein, came to me initially with the data,” Murphy recalled. Hussein, a visiting scholar from Egypt, is the primary author on the recently published paper. “She was basically saying, ‘Oh, it’s not working; it’s not what we thought; there must be something wrong,’” Murphy said. “And we said, ‘Actually, the data is good data. So what does it mean?’ It allowed us then to go down an unexpected path. I think there is definitely more to learn about RNA thermosensors and how bacteria respond using RNA than we currently understand. We often kind of get into a rut of thinking we know about this already. But clearly there are differences that we didn’t know about.”

Darlene Berryman, Ph.D., R.D., L.D., associate dean for research and innovation at the Heritage College, called the study an indicator of the college’s growing research ambitions. “This research highlights the expanded, collaborative efforts of the Heritage College’s Infectious and Tropical Disease Institute in the area of bacterial pathogenesis,” she said. “These unexpected findings also illustrate that we still have a lot to learn about our microbial environment. OHIO’s ITDI is well-positioned to evolve our understanding of bacteria.