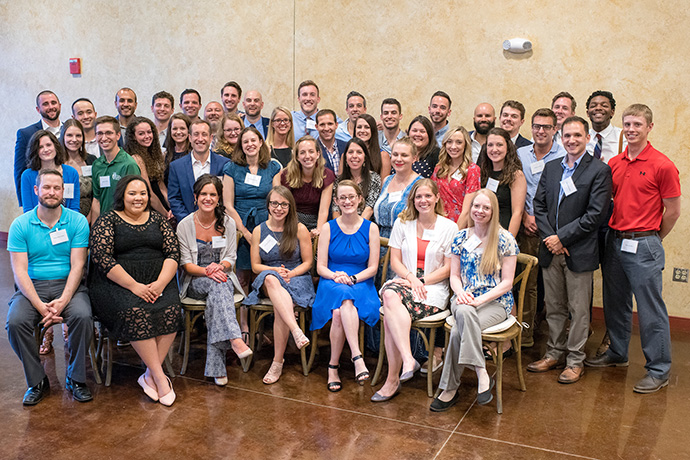 The Heritage College, Dublin, graduated its first 48 students on May 12.

When the Ohio University Heritage College of Osteopathic Medicine graduated its 39 th class May 12, the Commencement carried an added significance, as the first students from the college’s Dublin campus received their degrees.

“I couldn’t be any more excited, or more proud, of the work this first group of students has been able to do,” said Heritage College, Dublin, Dean William Burke, D.O. (’88). Of the 50 students in the campus’s inaugural class, 48 graduated Saturday. The remaining two have been chosen as primary care associates who will spend an additional year as junior faculty before graduating.

Funded in part by a transformational $105 million gift from the Osteopathic Heritage Foundation, alongside our pre-eminent education partner OhioHealth, and with the partnership of the city of Dublin, the Dublin campus launch was a key part of the college’s strategic campaign to remake care delivery in Ohio. Already a leader in training primary care physicians from Ohio who stay here to practice, the college aimed to plant its mission in one of the state’s population centers with its expansion into central Ohio in 2014 and into northeast Ohio the following year.

All but two of the 48 graduates from the Heritage College, Dublin, are from Ohio. Almost 70 percent have matched to Ohio residency programs, with 37 percent in central Ohio. Sixty percent are pursuing primary care specialties, and 13 will enter OhioHealth residencies.

These include Columbus resident Nina Passen, who will join a new family medicine residency program at OhioHealth Dublin Methodist Hospital. Like many of her classmates, Passen wanted to train in central Ohio, with an eye to practicing there.

“I love this community, and I feel that I can cater to its particular health care needs better because I am from here,” she said. OhioHealth’s commitment to providing rotation slots for Heritage College, Dublin, students was another strong draw, she said.

Burke said from the outset, the campus has worked with OhioHealth and other partners including Nationwide Children’s Hospital and Mount Carmel Health System to develop clinical rotations and research opportunities.

Classmate Sarah Isenhart was just as excited about her internal medicine residency with the Mt. Carmel system. “Oh my gosh – I’m ecstatic!” she admitted. “It’s a dream come true for me.” Being part of the first class of Dublin graduates, she added, has been “like you’re part of a big family. I know I can go to any one of them, any time, for anything I need.”

Graduate Sam Nobilucci commuted to medical school in Dublin from his home in Johnstown, Ohio, which let him maintain his support network and, in a sense, bring his community along as he trained.

“The fact that I never had to leave Johnstown means that the people who saw me when I was 5 years old, running around with my little plastic stethoscope and saying, ‘I’m going to be a doctor someday,’ have seen me grow up from a young boy into a man and a physician,” he noted. “And there’s an amazing connection that’s built when you train in your own community.”

Classmate Andrew Gable’s hometown of McConnelsville, Ohio, is closer to the Heritage College’s Athens campus than to Dublin. But the college’s central Ohio site let him maintain his volunteer work for Physicians CareConnection free clinic in Columbus and his research at Nationwide Children’s.

“Those were things that I wanted to continue, so when the Dublin campus came along, that was a perfect combination for me,” said Gable, who will enter a residency in anesthesiology at OhioHealth Doctors Hospital. His fiancé, classmate Lacey Ruppert, will be a family medicine resident at OhioHealth Grant Medical Center.

“In 2014, I told the first Dublin students that they were true pioneers,” he recalled. “Four years and a lot of hard work later, they should feel enormous pride in taking this next step in their journey, from medical students to resident osteopathic physicians. Our Dublin graduates are going to play an important role in transforming the medical care landscape of central Ohio, and now we will really begin to see that happen.”