Heritage College curriculum project one of nation’s most innovative 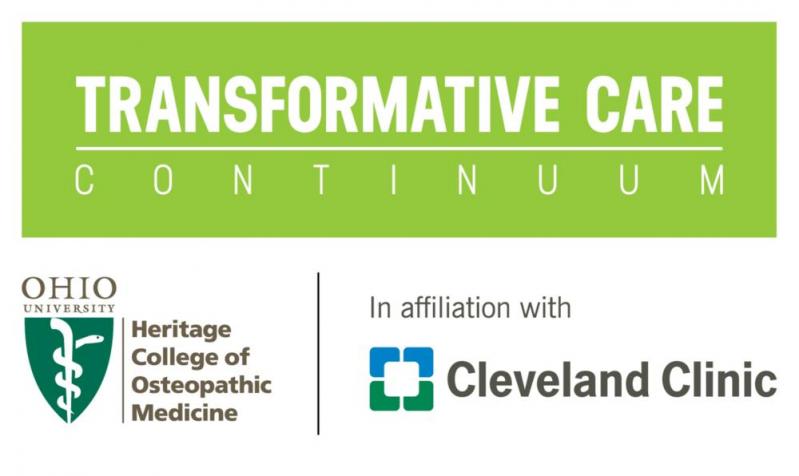 The Ohio University Heritage College of Osteopathic Medicine is ready to train students for the brave new world of 21 st century medicine – a world in which interprofessional teamwork is essential, care is judged by outcomes rather than patient volume and doctors treat populations as much as individuals.

As a member of the American Medical Association’s Accelerating Change in Medical Education Consortium, the Heritage College is one of 32 medical schools nationwide that are test-piloting new ways to educate future physicians. But while many consortium members are investigating single curriculum changes meant to fill specific gaps in health care, the Heritage College will soon launch a sweeping new streamlined approach to medical education for a group of eight incoming students at the Heritage College, Cleveland.

Developed in partnership with Cleveland Clinic, the Transformative Care Continuum is an accelerated, competency-based demonstration project that will prepare students for careers in family medicine through a continuous experience from medical school through residency and beyond. The project, set to launch in August, includes an intense emphasis on primary care, teamwork, health systems science and immersion in the patients’ community.

“A lot of the programs in the Consortium are undertaking a very specific project and applying that to all of their students, which is great,” said Isaac Kirstein, D.O., dean of the Heritage College, Cleveland. “But we’re the only program in the consortium that is making a wholesale change, not for all of our students, but for a cohort of eight per year. Instead of trying to see what we can slowly shift, we’re trying to create a laboratory where we can make large-scale changes in curriculum and outcomes and structure.”

TCC students, who must commit up front to practicing family medicine, are embedded from their earliest days of medical school with an interprofessional family medicine care team at one of two Cleveland Clinic sites in Akron or Lakewood, Ohio. There, they’ll work two half-days a week, taking on different roles with the team, serving successively as medical scribe, patient navigator and junior intern.

To make this approach work, members of each interprofessional team will have to be able not only to function as a tightly knit medical unit, but also to teach medical students to work effectively with the team as well. The college has received a two-year, $299,272 award from the New York-based Josiah Macy Jr. Foundation , to support a project that will train team members in better teaching practices, including improved assessment and feedback.

Each team will care for a population panel that includes hundreds of local patients – an approach that highlights the need to spot social determinants of health that affect whole communities. As the students progress through undergraduate medical education – in three years rather than the traditional four – they’ll move toward inheriting their own patient panel and toward Cleveland Clinic family medicine residencies they’re guaranteed upon successful completion of the program. By the time they finish those residencies, they’ll have had six years of experience working with – and sometimes leading – the same health care team.

“These TCC students will be practicing skills that their interprofessional colleagues perform, and learning from the perspectives of those colleagues,” explained Leanne Chrisman-Khawam, M.D., M.Ed., who directs the TCC program for the Heritage College. “It’s a process by which they’ll slowly mature into family doctors as they utilize the leadership skills, population health knowledge and health system skills that we’re teaching in the other portions of their coursework. These are proficiencies that primary care physicians need to master, but in which they haven’t always been formally trained before now.”

Heritage College Executive Dean and Ohio University Chief Medical Affairs Officer Ken Johnson, D.O., said that curriculum transformation projects like the TCC put the college “at the forefront of the growing movement to adapt medical education to changes our graduates are already experiencing in patient care.”

The major commitment to this project by Cleveland Clinic, a name long synonymous with superb specialty care, also reflects the increasing emphasis being placed nationally on the importance of primary care. And according to Sandra Snyder, D.O. (’00), program director for the family medicine residency program at Cleveland Clinic, the world-renowned health system believes the TCC can help produce the kind of physician that modern care demands – and, by so doing, help contain the rising cost of care.

The Clinic is already moving to a highly team-based approach to health care where success is measured in positive outcomes rather than patient volume. The TCC aims to produce doctors for whom working in such an environment is second nature.

“We’re moving into a value-based world, where it doesn’t necessarily matter how many patients we see; our metrics are based on how well we’re managing their chronic disease,” Snyder explained. “So the Clinic is switching all of its outpatient practices to more of a team-based unit – they have a physician, they have nurse practitioners, a pharmacist, social workers, that are going to manage a population of patients. And we’re using this same model in our residencies as we teach the medical students.”

Students completing the TCC, she noted, will be pre-integrated into this system. “They will be taught things that doctors aren’t usually taught,” she said. “They’re going to be taught how to work on teams, how to lead teams, and how to function on a team that is led by a nurse or a pharmacist, which was kind of unheard of in the past.” The curriculum also will include lessons in advocacy, patient safety and quality, and how to navigate the health care system.

A pioneering program requires students equipped to be pioneers, and the Heritage College and Cleveland Clinic have worked together to handpick the first cohort of students.

Chrisman-Khawam said she looked for attributes including maturity, self-directedness, self-awareness, leadership ability, strong communication skills, integrity and at least some history of teamwork. “Because they’re required to be highly self-directed, they’re going to need to be lifelong learners who can work on their own, take a project, plan for it and complete it,” she said. “We also want people who have a heart for the underserved because it’s our goal to partner with the urban, underrepresented minority, and disadvantaged communities and have a lasting impact.”

One of the virtues of the TCC, Snyder said, is that it represents a true collaboration between medical education and health care, to align physician training with what medicine needs.

Chrisman-Khawam suggested the current push to remake medical education may be as revolutionary as the reform movement sparked by the 1910 Flexner Report on physician training in the United States and Canada.

Kirstein agreed. “I think that’s a key part of this – to change the system,” he said. “The definition of primary care is undergoing a revolution. And we have to create physicians who will thrive in that new arena.”