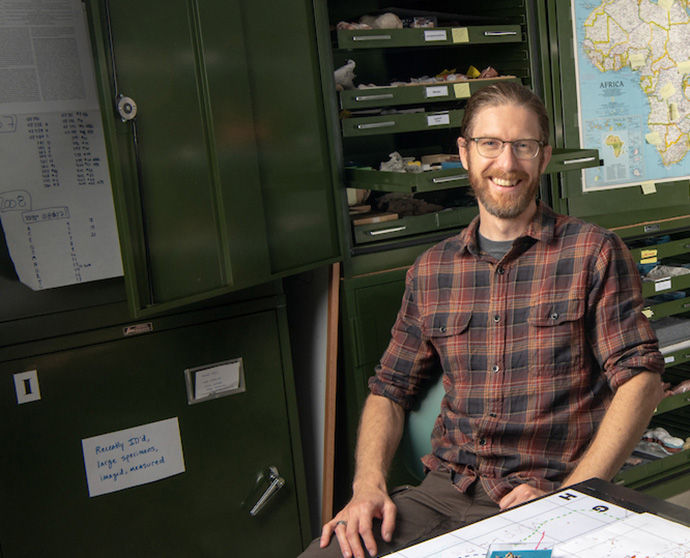 Joseph Groenke spent months piecing together – in digitized form – a set of shattered fossil teeth from an extinct mammal that lived around 70 million years ago.

When he was finished, Groenke, laboratory coordinator for the O’Connor lab in the biomedical sciences department of the Ohio University Heritage College of Osteopathic Medicine, condensed his long and painstaking reconstruction job into a 30-second animation. That video has been honored with an award for “paleo art,” bestowed by the Society of Vertebrate Paleontology.

“It’s extremely gratifying,” Groenke said of the award, “in part to see it recognized as something of an artistic endeavor, which was a surprise for me, because I don’t consider myself to be an artist. I’ve always thought of myself as being a technician.”

The fossil material from which Groenke worked was found in Madagascar on an expedition undertaken by an international team of researchers. It comes from a roughly possum-sized gondwanatherian mammal, so named because it inhabited the ancient “supercontinent” of Gondwana, which existed from about 550 million to about 180 million years ago.

The creature was a significant find; it has yet to be given a scientific name, which will happen once the researchers publish a pending journal paper on it.

Groenke emphasized that his video is more than just an eye-catching illustration; it highlights a methodology that allows scientists to study fossil forms that once would have been inaccessible. Faced with a delicate fossil that can’t be removed intact from its rock setting, they can use micro-CT scanning to map its shape into a digital format. Bits of virtual fossil can then be manipulated in computer space, fitted together into a more complete structure and even used as the basis for 3D-printing of a physical prototype.

“A lot of fossils are mechanically prepared out of rock, and it’s not always possible to do that,” he explained. “Some specimens are extremely small, or they’re extremely fragile, or both, and it can be difficult to impossible, not to mention dangerous, to actually remove them from rock. And one of the things we’ve discovered is that CT scanning works quite well for many of our specimens.”

In the case of the new gondwanatherian mammal, Groenke was working with virtual copies of a large number of tooth fragments. He pieced them together in 3D computer space into a semblance of how the tooth row would have looked when the animal was alive, then summarized the process in his award-winning video.

“Most of those teeth are millimeter scale, and most of them were smashed into pieces, anywhere from four or five fragments to literally hundreds of fragments,” he said. “It was impossible to reconstruct them physically, but I was able to do that digitally. That was the technical end, getting all those jigsaw puzzle pieces to fit together in the computer space. And then the award was specifically for animating that process, so one could easily see visually how the broken parts reassemble themselves into a lifelike condition.”

This kind of project can be educational for the public, but it’s also of practical use for scientists. For example, digital versions of a fossil can be shared – or a 3D-printed copy of a specimen can be duplicated – to give researchers in different locales something they can hold in their hand to examine. And, Groenke pointed out, since he logs all the manipulations he carries out in a reconstruction, other researchers can follow the process step-by-step – making it repeatable, a basic requirement of science.

Patrick O’Connor, Ph.D., Heritage College professor of neuroscience and anatomy and a principal investigator on the team that recovered the fossil, noted that understanding the way fossils are fitted back together provides fundamental insight into principles of anatomic structure, and ultimately, how those teeth served a functional role in the animals from which they are derived.

“Examining the detailed anatomy of teeth, including that of replacement teeth still forming inside the jaw, allows us to pose questions related to animal development not previously accessible before the method behind Groenke’s project," O'Connor said. This method, he explained, "does change what we can see, what types of information we can derive from the remains that we have. It really does allow us to ask almost completely different kinds of questions.”

For specimen work like this, researchers can use the OU MicroCT CORE with 3D printing supported by Ohio University’s Innovation Center.