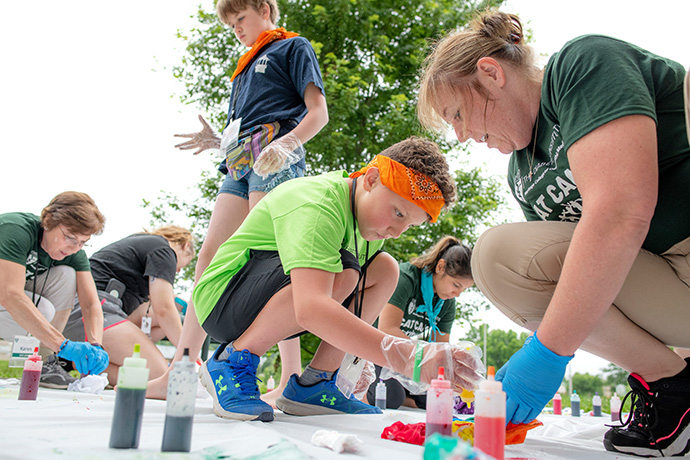 Seven youngsters from around the southeast Ohio area were the first-ever participants in CAT Camp, a summer day camp for children with type 1 diabetes conducted last month by the Diabetes Institute at the Ohio University Heritage College of Osteopathic Medicine.

While a number of such programs exist around Ohio, none had been offered in the southeastern part of the state until the Diabetes Institute created its camp to fill the need. Before CAT Camp, children had to travel to the Dayton or Columbus area to attend a similar camp.

According to Karie Cook, B.S.N., director of operations for the Diabetes Institute and camp director, CAT Camp was designed to provide participants a place to have fun, meet other kids with type 1 diabetes and be in a safe environment with medical supervision to help manage their diabetes.

“Our goal was to help the campers manage their diabetes well so they could fully participate in every aspect of camp,” Cook explained. “Our medical staff worked closely with each camper to help them have the best experience.”

The camp’s biggest success, she added, “was not only that the campers had a great time, but that they felt safe and had the understanding that all the other campers and some staff were living with type 1 diabetes as well. The importance of knowing there are other people who really understand what it’s like to live with diabetes can’t be overstated.”

Amber Healy, D.O. (’09), Heritage College assistant clinical professor of specialty medicine and director of the clinical care division of the Diabetes Institute, served as camp medical director. “It was so exciting to be a part of the Diabetes Institute’s first diabetes day camp,” she said. “Seeing the kids realize that every camper there had type 1 diabetes and that they were not alone was great. They were able to play and be creative in an environment where administering insulin and counting carbohydrates is the norm, unlike other camps and in school environments. I look forward to being involved again next year.”

Campers and their parents gave CAT Camp thumbs-up reviews, with many commenting on how much fun they had. One camper remarked, “I want camp to be 10 days next time”; another camper told organizers that being at the camp felt safe.

“He was nervous about coming the first day, but he had so much fun and was up and ready the second day,” one young camper’s parent reported.

“Thank you for putting this on,” said another parent. “You are making a difference in the lives of these kids.”

The seven campers, who ranged in age from 8 to 15, came from Perry, Athens, Hocking, Washington and Gallia counties in Ohio and Wood County, W.Va. During their three days of camp at the Athens Community Center, they enjoyed activities including games, arts and crafts, and a well-received bounce house obstacle course.

Joe Dorrian, owner of the Columbus-based Ohio School of Falconry, gave a presentation on falconry with the help of an owl, falcon and hawk. He shared information about the birds, then let each camper and staff member have the hawk fly to them. Lawrence Greene of Ugata, an area social services business, led the campers in a drumming circle; Cook noted that drumming can be used to reduce stress and help with coping.

Other activities included a painting session led by Elizabeth Beverly, Ph.D., and a physical activity session led by Emily Guseman, Ph.D. Guseman and Beverly are Heritage College assistant professors of family medicine who are heading up a federally funded project to expand a diabetes navigation program serving southeastern Ohio.

The camp received support from the Royal and Select Masons of Ohio, who were instrumental in getting it up and running. The project also received a grant from OhioHealth, and Shriver’s Pharmacy donated medical supplies. The nonprofit JDRF, and the companies Eli Lilly and Novo Nordisk, donated giveaway items for the campers.