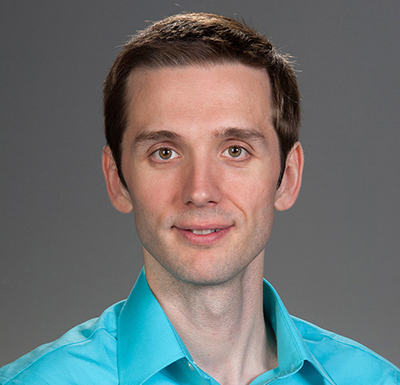 When researchers from the Ohio University Heritage College of Osteopathic Medicine published an article last October in the journal The Anatomical Record, it attracted attention from science news sites worldwide. Now the article, which shared findings on how different giant dinosaurs evolved different types of cooling systems to keep their brains from overheating, has won lead author Ruger Porter, Ph.D., more recognition in the form of an Early-Career Anatomist Publication Award from the American Association for Anatomy.

The award honors the best publication of the year in each of the AAA’s three journals: Anatomical Sciences Education, Developmental Dynamics and The Anatomical Record.

“To win this award and be recognized by other scientists for a solid scientific contribution feels incredible,” said Porter, an assistant professor of instruction in human anatomy in the Department of Biomedical Sciences. “This publication increases our understanding of dinosaur thermal physiology and ties into our previous work, building on six other publications we’ve produced. I’m looking forward to working on more.”

The winning article, titled “Vascular patterns in the heads of dinosaurs: evidence for blood vessels, sites of thermal exchange, and their role in physiological thermoregulation strategies,” was co-authored by Lawrence Witmer, Ph.D., professor of anatomy and Chang Ying-Chien professor of paleontology. It reported on the latest findings in a research effort going back more than a decade, in which Ohio University scientists have studied how large-bodied dinosaurs survived potentially fatal overheating. The article began as a chapter in Porter’s dissertation.

Using advanced imaging techniques and sophisticated quantitative analyses, Porter and Witmer found evidence of extensive networks of blood vessels in the skulls of dinosaurs that may have been used to cool blood going to the brain. They concluded that different gigantic dinosaurs solved the problem of overheating in different ways by using different sites of evaporative cooling and different sets of blood vessels. This research was funded by grants from the National Science Foundation.

“We’re fortunate at our college to have a vibrant, active set of researchers in paleontology and comparative anatomy, whose important scientific work attracts attention worldwide,” said Associate Dean for Research and Innovation Darlene Berryman, Ph.D., R.D., L.D. “Dr. Porter is clearly establishing himself as a valuable addition to that group, and this early-career recognition bodes well for his future.