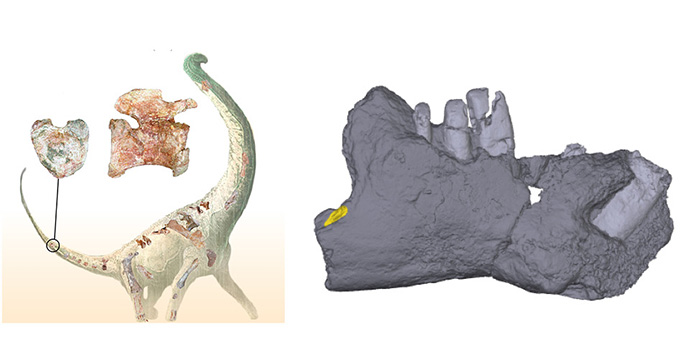 Heritage College researchers have recently described and named two new species of animals from the Africa continent, dating from the Cretaceous Period about 100 million years ago.

The first, a new dinosaur discovery, is helping scientists piece together the evolutionary history of ecosystems on the African continent.

The new dinosaur species is named  Mnyamawamtuka moyowamkia, a Swahili-derived name that references both the riverbed in which it was found (Mtuka) and the fact that it had a unique tail shaped like a heart. This discovery has earned attention from science-oriented publications as well as major mass media outlets including CNN, USA Today , Reuters and Fox News.

The second new species is a small mammal, dubbed Galulatherium jenkinsi, whose fossil remains constitute the most complete mammal yet discovered from the entire Cretaceous of continental Africa. This find is offering insights into – and raising new questions about – the past diversity of mammals on earth.

A new dino with a unique tail

An Ohio University team, funded by the National Science Foundation, published an article about the dinosaur find in February in the journal  PLOS ONE . Authors were Eric Gorscak, Ph.D., an Ohio University graduate who’s now an assistant professor at the Midwestern University in Downers Grove, Ill., and Patrick O’Connor, Ph.D., professor of neuroscience and anatomy at the Heritage College and Gorscak’s advisor during his Ph.D. research.

Mnyamawamtuka moyowamkia is the third new dinosaur named from southwestern Tanzania by the NSF-funded team. Like the other two species, Shingopana songwensis  and Rukwatitan bisepultus , it was a large, long-necked titanosaur sauropod. Its partial skeleton was recovered from rocks dating to the Cretaceous-age. The initial discovery took place in 2004, when part of the skeleton was found in a cliff wall overlooking the seasonally dry Mtuka riverbed; annual excavations continued through 2008.

Like the team’s other discoveries, this latest find will allow scientists to add more detail to the picture of what ecosystems on continental Africa were like during the Cretaceous period. Click here to read more about the most recent fossil discovery.

An unusual mammal that raises questions

The NSF-funded OHIO team, in collaboration with international colleagues, identified and named the new mammal in an article in Acta Paleontologica Polonica, on which O’Connor was lead author. Other OHIO co-authors include Nancy Stevens, Ph.D., professor of functional morphology and vertebrate paleontology, and Joseph Groenke, laboratory coordinator in the Department of Biomedical Sciences. Galulatherium is the first named mammal species from the Late Cretaceous Period (100-66 million years ago) and represents the most complete mammal yet known from the African continent during this time.

Scientists think the squirrel-sized creature was probably related to the group of mammals known as gondwanatherians, but an unusual combination of features (including ever-growing and enamel-less peg-like teeth) make it hard to place within any known group of mammals living or extinct.

The new species name is based on the Galula rock unit and therium, Latin for beast, with the species name “ jenkinsi ” honoring the late Farish Jenkins, distinguished professor of anatomy and organismic biology at Harvard University and supporter of the Rukwa Rift Basin Project early in its development.

The single specimen of Galulatherium – a nearly complete lower jaw – was discovered in 2002, when Rukwa Rift Basin Project researchers found a bone fragment eroding from sandstone along a river valley in southwestern Tanzania. The team announced the discovery of a new mammal in 2003 but held off from naming it until more details of its anatomy could be revealed.

This was made possible as improvements in high-resolution X-ray computed tomography allowed the team to document anatomic details of the specimen and to establish it as a species new to science.

The OHIO-based study included experts from several institutions around the world, including Sweden, Australia, and the US. The unique combination of anatomical features continues to make it difficult to place in the existing framework of mammalian evolution, raising more questions for researchers to pursue. Click here to learn more about the discovery.