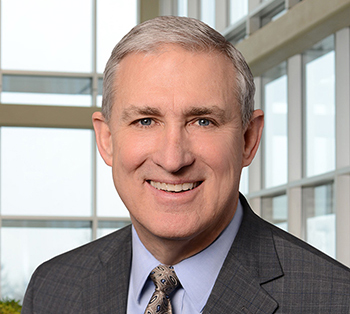 Health care executive, family physician and military leader Stephen E. Markovich, M.D., will be the speaker for the Ohio University Heritage College of Osteopathic Medicine’s 2020 Commencement, set for 10 a.m. May 9 at the Convocation Center in Athens.

Ohio University President M. Duane Nellis, Ph.D., said the college’s relationship with OhioHealth brings great value to both parties. “As we work to develop and strengthen these kinds of connections through our new Corporate Engagement Office, our Heritage College graduates – many of whom have done rotations in OhioHealth facilities – can benefit greatly from the insights of an industry leader like Dr. Markovich,” he said.

Ken Johnson, D.O., Heritage College executive dean and Ohio University chief medical affairs officer, said he looks forward to hearing Markovich’s remarks. “We’re privileged to have Dr. Markovich as the speaker at our 41st Commencement,” Johnson said. “He brings a wealth of experience in delivering top-quality health care and a deep understanding of our college’s mission, based on the long-standing partnership between our two institutions.”

In addition to his role as health care executive, Markovich has served as major general (now retired) and commander in Ohio’s Air National Guard, focusing on strategic planning, force development and development of future missions. He has served as the Guard’s chief of staff, state air surgeon and senior medical officer; logged more than 2,000 flying hours as a fighter pilot; completed three overseas deployments to the Middle East; and led the development of a task force to respond to medical disasters in Ohio.

He is also an author and national speaker, and has served on the boards of organizations including JOBS Ohio, United Way of Central Ohio and the Simon Kenton Council of the Boy Scouts of America. He is a diplomat on the American Board of Family Practice and a member of the American Academy of Family Practice.

Markovich lives in Dublin with his wife and three children.