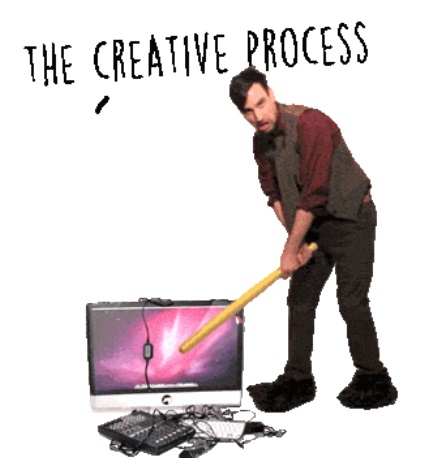 About Owen​: Owen Lowery is a member of the first class of students in the Scripps MFA in Communication Media Arts program: a program that does not belong to one particular school. The MFA in Communication Media Arts began as part of the School of Media Arts & Studies, School of Visual Communication, and COFAs School of Art & Design, but has now expanded to include the School of Emerging Communication Technologies. Owen studies Interactive Media with a cognate in Museum Studies and intends on using his degree to work as an interactive artist. Before attending Ohio University, Owen began his professional career as a motion designer and animator, working for companies such as Lynda.com and LinkedIn. Though he’s moving away from animation, he still uses much of his knowledge for interactive media art.

Regenerative Letters: ​Regenerative Letters ​ is an interactive art piece. Owen modified an old typewriter to be used as a user input device. Users are instructed to write someone an email, then, as each letter is typed, the phonetics of each character are heard (ex. The letter ‘B’ produces ‘Buh’). The combination of both hindered and distracted typing slows the writing process significantly and requires greater focus. After a key is pressed, a visual graphic is rendered to the screen. The visual can be anything from a shape to a filter over the entire image. When the user is done typing, he presses the ‘send’ key, deleting the email’s plaintext, and every trace of the final image except the one sent to the recipient, who then becomes its legal owner. Owen claims his piece can be interpreted a number of ways, but its intent is to magnify the small steps of communication, stating, “I'm just hoping that by creating situations where actions I value can take place in the world, it will in some small way encourage similar actions from those same people when they are not interacting with my art.”

How it works​: To create the piece, Owen used an Arduino Mega microcontroller (similar to a mini-computer) to detect user typing. The controller produces a 1 or 0 when letter circuits are open or closed.

"On the bottom of the typewriter there are levers that push down when you type, which pull the levers that swing the letter forward to type. Using thick plastic sheeting and conductive copper tape, I created rows of circuits that are wired into the individual pins of the Arduino Mega. The metal of the entire typewriter is wired into the ground pin of the Arduino. So when a key is pressed, the metal of the typewriter touches the metal copper tape, which closes a circuit, allowing the super tiny bit of electricity to flow through. The Arduino detects this and sends the circuit state (0 or 1) through the USB cable into the software I use to create interactives called TouchDesigner. There are some extra keys I had to wire up differently because they don't have levers here, but it's basically the same kind of process. The reason I did it this way instead of just making it an actual keyboard is so I can hook up multiple typewriters to a single computer that can work on their own monitors. Multiple keyboards would all type everywhere.” 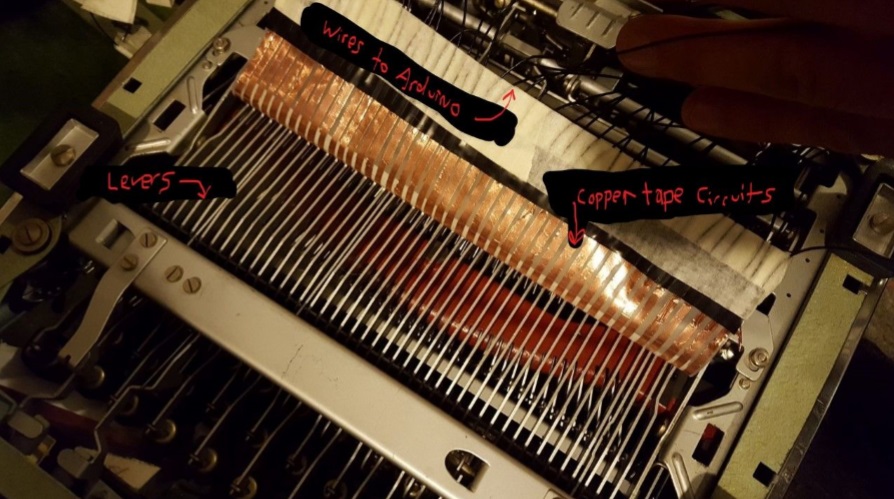 Owen used TouchDesigner to program the machine. The writing process is automatically recorded, played back to users when the final email is sent, then deleted when finished.

Thoughts on ECT​: Owen is very excited about the new ECT school, stating, “So much of what I do has to do with integrating technology into the environment, and much of what they are working on has to do with Internet of Things and the sort.” He goes on to express frustration that so many programs at Universities compartmentalize fields of study, limiting student education potential. The ECT School, however, is taking steps in the right direction, uniting a diverse range of courses and faculty.

Other Projects​: ​Regenerative Letters ​ is actually one of three separate pieces in a series entitled Mediums. All three pieces have to do with communication, utilizing old tech, and deconstructing user input, then reconstructing it in another form. The pieces are entitled ​The Archive of Secrets ​and Personification Amplifier. Information on the two can be found below.