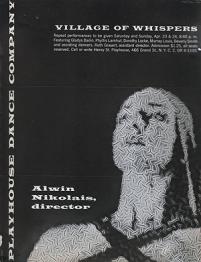 Summary:  Newspaper Press is part of the Press and Promotion series.  The sub series consists of articles, advertisements, newspaper photographs and other memorabilia.  Types of memorabilia include telegrams, tickets, letters, and business cards and are noted in the folder descriptions.  The content of the Newspaper Press sub series includes reviews, interviews, press releases, editorials and commentary about Alwin Nikolais, Murray Louis and their choreographic works.  The series is arranged by artist and chronologically, dating from 1927 – 2010.  Shipments were received in 2000 through 2011.