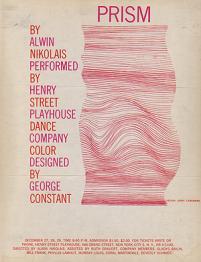 The posters sub series is part of the Press and Promotion series and includes over 400 posters. The posters were received beginning in 1999 through 2011. They are arranged by artist and by size. Alwin Nikolais’ dance companies are illustrated in over 260 posters; The Murray Louis Dance Company is represented in 116 posters; and Alwin Nikolais and Murray Louis Dance Company has 74 posters.