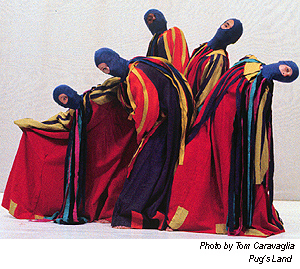 Summary:  The Film sub series is part of the Moving Image Series.  The original films are silent 16mm and 8mm and vary in length.  Films document the early choreographic works of AlwinNikolais and Murray Louis and date from the 1950’s – 1960’s.  Content includes performances, rehearsals and workshops.  There are 66 titles of original films, without sound, not preserved. The sub series of 27 original films copied for preservation had sound elements matched to the film by Murray Louis.  John Allen from Cinema Arts did the preservation processes.  Audio elements were converted to 16mm magnetic sound film and combined to produce VHS, BETA SP and 1″ Master tapes.  Films were received 2001.  Each sub series is arranged by artist and date of premiere of the work.