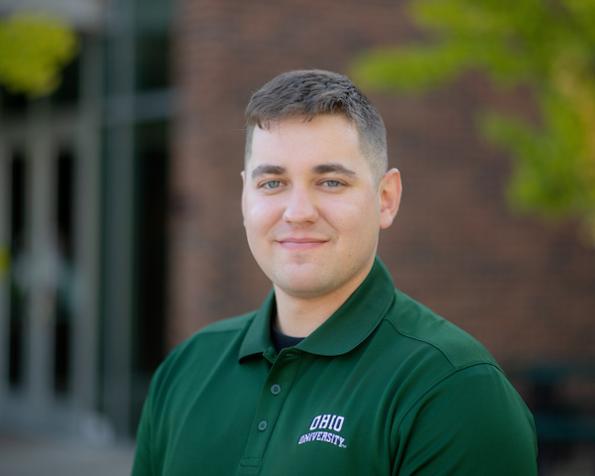 A desire to serve and help others led Wolfe to military service and later to study law enforcement and criminal justice at Ohio University.

Originally from the Athens area, he served in the United States Marine Corps from 2015 to 2019 with deployments to Australia and Syria while stationed in California. Upon completion of his military service, he chose Ohio University Lancaster for its proximity to his home in Pickerington, and its small, personable campus. As he considered his academic options, Wolfe was drawn to the Law Enforcement Technology and Criminal Justice programs, which would allow him to complete both his associate and bachelor’s degrees, qualifying him to work in public service.

Now in his third year at Ohio University Lancaster, Wolfe will complete his associate’s degree in Law Enforcement Technology in December and has begun work on requirements for his bachelor’s degree in criminal justice.

“I’ve taken a lot of the skills that I learned at Ohio University, and I have applied them here,” Wolfe said.

According to Wolfe, the skills and confidence he has developed in writing and public speaking, through giving presentations for his courses have served him well in his role with the Fairfield County commissioners, where he is called upon to interact with and support public officials as well as members of the community.

For now, he is leaving his post-graduation options open and is interested in entering state law enforcement in roles such as a game warden, investigator, or following his interest in case law and moving on to law school.

Wolfe encourages others who are interested in law enforcement or criminal justice to look into these programs which he says prepare students for many jobs.

As a member of the Alpha Phi Sigma national criminal justice honor society, Wolfe has also served as a student veterans representative at Ohio University Lancaster. He is excited to represent his community and campus on the Lancaster Coordinating Council.

“I’m very grateful for them taking the chance on me and putting me in that position,” Wolfe said. “It means a lot to me, and I think I can do a lot of good.”

He appreciates the opportunity to learn from faculty like Lisa Taylor and Sonja Rawn, who he describes as personable, knowledgeable, and supportive.

Wolfe is an involved and engaged student leader, Taylor, an associate professor of instruction, said.

“Our campus is enriched because Brian Wolfe is there,” Taylor said. “From the beginning of his educational journey, it was apparent to me that Brian was a super star. He is always one to volunteer and get involved to improve his class, university, community, and environment.”