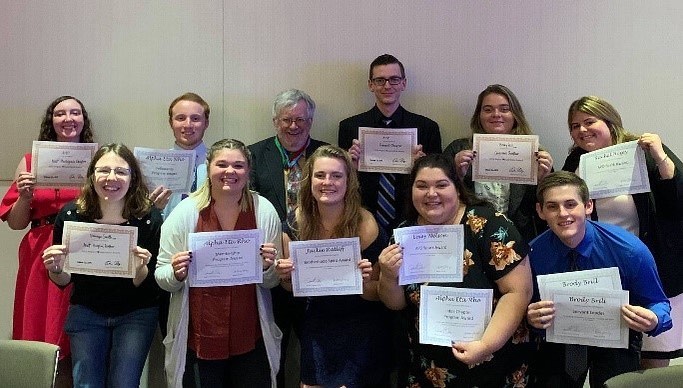 Alpha Phi Omega at Ohio University was honored with the National Pledge Program of Excellence Award.  In addition, the student organization received Diamond Status level recognition for completing all nine (9) National requirements to be considered for the award plus an additional nine (9) items, with three from each of the categories of development, reporting, and service.

"The leadership team for our chapter has established high goals and created a plan to accomplish them,” Professor of Communications Studies and Faculty Advisor of Ohio University Lancaster’s Alpha Phi Omega Chapter, Candice Thomas-Maddox said.  “Through their recruitment efforts, the chapter quadrupled in size last Fall, and our officers were dedicated to ensuring that they designed an engaging pledge education program to retain our new members."

"As the first regional campus to receive an APO charter, there were many who were uncertain if we could build and sustain our chapter beyond the first couple of years since we are a commuter campus.  The recognition that APO at OUL has earned at the regional, sectional, and national levels confirms the chapter's commitment to establishing its reputation as an award-winning chapter."

The chapter’s accomplishments at the national level come after earlier achievements for the group. At last Fall's Regional convention in Indianapolis, OHIO Lancaster’s chapter walked away with three (3) of the top awards: Outstanding Fellowship Program, Outstanding Interchapter Relations Program, and Outstanding Membership Program. In April of 2020, the chapter received the Brotherhood of the Year award at the Sectional virtual conference.