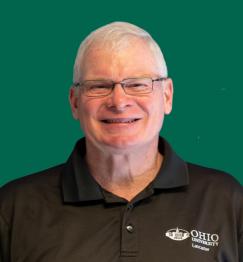 Gary R. Lockwood is a native of Lancaster, Ohio and a 1974 graduate of Ohio University. He started his academic journey in Brasee Hall not long after the building opened. He recalls construction was nearly finished when he was at Lancaster High School, and he was excited about the great addition to the Lancaster community. Lockwood earned a degree in Civil Engineering from Russ College of Engineering and was voted outstanding student by professors. Lockwood went on to earn his master’s and complete PhD coursework in Civil Engineering from Ohio State University.

Before beginning work at Ohio University Lancaster in 1980, he founded a company that concentrated on various areas of engineering consultation, subdivision design, and land surveying. Through his professional integrity and dedication, he made the company into one of the most respected firms in Central Ohio. Eventually, he sold the firm, but his influence can still be seen there today. Lockwood still provides the company with consultation and remains a steadfast part of the firm’s client networking. Besides developing his business, he has worked as a Plant Engineer, Environmental Engineer, Hydraulic Engineer, and Lancaster City Engineer.

In 1980, Lockwood became a faulty member here at Ohio University Lancaster and has since taught statistics, dynamics, strength of materials, AutoCAD and many other courses. Upon his “retirement” in 2008, he was granted Emeritus Professorship.

“It is my understanding Gary came to OUL because the campus needed an instructor for engineering. He continued because of his deep affection for the students. He is a consummate engineer and no doubt could have fared far better financially, had he continued with his engineering career. His choice to teach and lead the campus has been both inspirational and comforting.” said Sandy Doty, PhD, Associate Professor of Physics at Ohio University Lancaster.

Lockwood has served as President of the Board for the Hunter’s Run Conservancy District and is certified as a Disaster Response Engineer with the Engineering Ministries International (EMI). For over several years, and along with his engineer consulting business, he has personally contributed to both local and global communities in his time at EMI. He has completed design projects for communities following disasters in Uganda, Haiti, West Bengal India, and spent twenty-three days rebuilding communities in the Philippines after Typhoon Yolanda hit in 2014.

Lockwood is a cherished professor and advisor at Ohio University Lancaster. A former faculty representative and administrator, serving as interim associate dean 2003-2005. He has been a student, then became a Civil Engineer, and an Emeritus professor. He is an environmentalist, humanitarian and philanthropist. A husband, father, and a friend.

In 2010, Ohio University Lancaster | Pickerington started a new tradition during the annual awards recognition program. As part of the ceremony, the Campus recognizes an outstanding alumna or alumnus who has made an impact on the campus and the community. Lockwood is the 8th such alum to have been selected for the honor. This year, Lockwood was surprised when his family joined the awards ceremony, making the moment even more special for him. 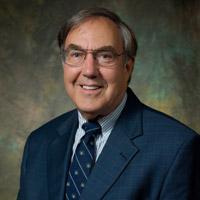 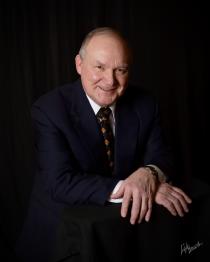 Prior to his graduation from Ohio University in 1967 with a Bachelor’s of Science in Education, John Baughman began his career as a cadet teacher with the Lancaster City Schools. He retired from the same school district after 30 years, serving as a teacher, building principal, district administrator and the last nine years as the superintendent of schools. John consistently demonstrated his love for and his commitment to his alma mater by serving on the College of Education Society of Alumni and Friends Board, the Ohio University Alumni Association-National Alumni Board, the Coordinating Council for Ohio University Lancaster, the last three major Capital Campaigns of the University and numerous special task forces and committees. John continues to reside in Lancaster with his wife Marcia (Scott) Baughman, a 1965 Ohio University graduate. Their three grown daughters, two of whom are also graduates from Ohio University, now work and reside in the central Ohio area. 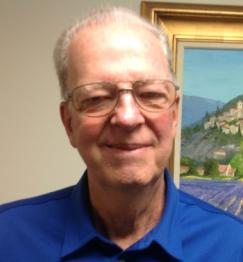 Dane Swinehart graduated from high school in 1954 and went to college the next year at Ohio University in Athens. He was taking engineering courses and playing sports. The summer after his freshman year, Swinehart got married. The following school year, Swinehart and his new bride headed south. Swinehart was transferring to Florida State to play baseball, but, life happened before he even took one class. The Swineharts were having a baby and later moved back to Lancaster to be near family with their new child. Dane worked at a paper mill, played semi-pro baseball and eventually landed a position at South Central Power. Around that time, Ohio University started offering classes at Lancaster High School. Swinehart eventually went back to college and worked his way up through the company. After graduating from Ohio University Lancaster, Swinehart became the president of the company. 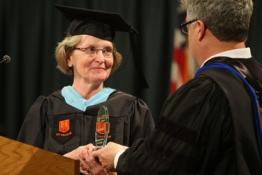 Debra Smith entered her freshman year at OUL after being named valedictorian of her high school class at Fairfield Union. She was a Kilburger Scholar and she graduated with a bachelor's degree in Psychology from Ohio University in 1974. She then returned to OUL to take prerequisite courses for a physical therapy degree. During her years as Assistant Professor/Program Director of Health Technology at OUL, Debra Smith has been a leader in education technology. In 2011, along with two other faculty members, Deb wrote a grant and received funding for Tutor Tracks, the first 24/7, tutoring process for students at OU-L. She has served as the chairperson of the Technology Committee and she was the key note speaker at the 2011 Women In Technology Conference at OUL. Deb also is passionate about her community. She is a member of the Fairfield Medical Center Board of Directors where she is soon to be president. Additionally, she is a member of the board of director for the Recovery Center, the Fairfield County Opiate Task Force and the Lancaster Chorale. She is an active member in the First United Methodist Church of Lancaster and she volunteers in the technology lab at Sanderson Elementary where her grandsons attend school. 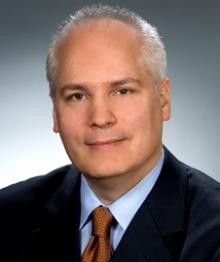 Stephen Brown was given the 2012 OUL Outstanding Alumni of the Year Award at Honors Convocation in June 2012. Brown graduated from Ohio University with a Bachelor of Business Administration degree in 1986. Brown went on to complete law school and now has his own law firm with offices in Lancaster and Columbus. Brown met his wife of 25 years at OUL and encourages others to attend OUL for its academic services and benefits. 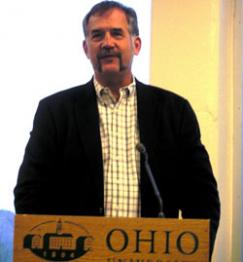 2011 – Mark Sells, BS 1973
In 1973, Mark Sells graduated from Ohio University with a degree in accounting. While at OUL, he was a Kilburger Scholarship recipient and played on the basketball team. Ten years following graduation, Mark founded the Lancaster Bingo Company, a company that has grown to be the largest bingo supplier in the United States. In November 2010, Mark took charity to a new level at OUL when he announced the creation of a new scholarship to benefit our students. But he didn't stop there… Mark wanted to challenge others to give as well, so his scholarship is set up as a matching gift. This means that when someone makes a contribution to OUL, Mark will match it dollar for dollar up to $50,000. We believe that Mark is the first in OUL history to make such a gift.

Cathy Bitler is a two-degree alumna of Ohio University. Her academic career started on the Lancaster Campus, and Cathy is a true advocate for regional higher education stating that college would not have been possible for her without the regional campus system. Cathy describes herself as a hometown gal who chose to stay in Lancaster following graduation, and the community has benefited from this decision ever since. Cathy has served Fairfield County and Ohio University as the President of Lancaster Rotary, Chair of the Lancaster Fairfield County Chamber of Commerce, Chair of the Lancaster Area Community Improvement Corporation, Chair of Heart of Ohio TechPrep Consortium, President of the Fairfield County Chapter of the Ohio University Alumni Association, member of OU's National Alumni Board, and through membership in several local organizations. She holds an Athena Award, presented by the Lancaster Fairfield County Chamber, a Distinguished Service Award from the OU Alumni Association, and an Alumni Leadership Award from OUL. Additionally, Cathy is a very active OU alum as a member of the OUL adjunct faculty, the Thomas Ewing Society, the OUL Coordinating Council and the OUL Promise Lives Campaign Steering Committee. Her financial support of the Lancaster Campus has never faltered, and she continues to impact students daily through her annual giving and campus volunteering.