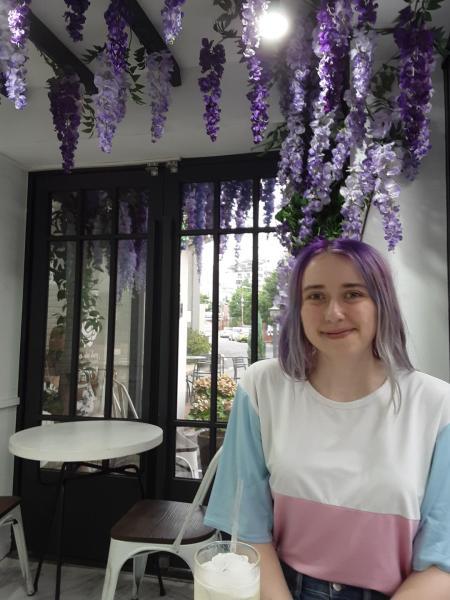 Kyra is majoring in English and Creative Writing and has a minors in East Asian Studies. She studied abroad through one of our affiliated providers CIS Abroad's program in Seoul, South Korea.

What skills do you feel you've gained from going on a global program?

I feel that I gained a lot of confidence in myself and that I have greatly improved not only in my social skills through making friends and socializing while in a foreign country, but also in terms of leadership and problem solving. So much of what I experienced abroad was completely new to me, but I feel like I adapted well and learned to solve every problem that arose effectively. I was also able to manage my time in a way that allowed me to focus on classes when I needed to while also still having fun in the country I was visiting, and I feel time management is a very important skill in both academic and professional environments.

What is one of your favorite memories from your global program?

Even with classes taking up most of my days, I still went out and explored every single day of my experience. My class was very close, so I would often go out with different groups of my friends from class or my roommate and her friends. One of my favorite weekend trips was one I organized to the Coex Aquarium. I am a big fan of aquariums, so I had a great time exploring such a big one with my friends. As the Coex Aquarium is housed within the Coex Mall, we also got to explore the gigantic shopping center after, shopping and eating delicious themed cakes and tonkatsu. Though this planned part of the trip was very fun, the most memorable part of the day came from when we were leaving. When we walked out of the mall we could hear very loud music playing; a song that I loved by a K-pop group called Everglow. It sounded very live so we decided to go and check out what it was before we hopped on the subway back to the dorm. We ascended the stairs by the mall entrance and and were met with the sight of a stage and a large crowd of people. A girl group on stage was performing, but we collectively convinced ourselves it must be a cover group of some sort because why would Everglow just be performing outside of the mall? As we got closer and made our way into the crowd we discovered that the group was not, in fact, a cover group; it was actually Everglow. And they weren't the only K-pop group performing that night. We had stumbled upon a K-pop festival by complete and utter accident. I am a huge fan of K-pop so I was delighted, though completely dumbfounded by how we ended up there. This was the only K-pop event I was able to attend while I was in Korea and it was by complete chance. I still remember us walking away after the show ended and the crowd had dissipated and us collectively being shell shocked at what had just happened. I had a lot of amazing experiences during my study abroad trip, but what was one of the most memorable for just how crazy and unexpected it was.

What advice would you give a student you is interested in a global program?

It is very important to do your research before studying abroad. Understanding the ins and outs of studying abroad in general is extremely important, but it can also be instrumental to be well educated on the country you will be traveling to. Though it is important to be aware of your surroundings wherever you go, I feel it is particularly important to be knowledgeable about the place you will be staying. If I had not had the background knowledge I did when traveling to Korea I feel like I would have had a much much harder time getting around or understanding what was going on around me. This is especially important if you aren't fluent in the language of the host country; knowing about the culture can help you get around even if you can't fully speak or understand the language.