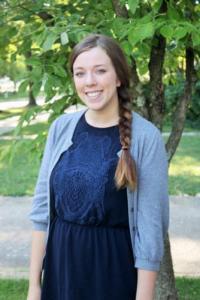 Sam started working for Ohio University in July 2017. Before her position with the university, Sam worked for on-campus study abroad company, IEP, from October 2015 to April 2017.  She is an Ohio University alumna (almost twice over)! She graduated in 2015 with studies in Anthropology, History, and Museum Studies and is currently finishing her studies for the MA in Law, Justice, and Culture at Ohio University.

During her undergraduate years, she studied abroad in Northern Ireland and received a Student Enhancement Award to conduct ethnographic research in Cambodia. Her travels for work and play have also taken her out west to Denver, CO and Los Angeles, CA as well as to Canada, France, Germany, Poland, Denmark, Sweden, Czech Republic, Ukraine, Mexico and Peru.

Sam has some life goals, including becoming fluent in 3 languages by 30 and spending an entire summer rock climbing & kayaking. You can find her sipping coffee at any hour of the day, probably listening to music in languages she doesn’t understand (yet!) and wearing some shade of green.

Schedule with her to chat about: ANYTHING! She especially loves talking about navigating culture shock, less-traveled study abroad locations, and research/work abroad.