Ohio University, by virtue of being the oldest institution of higher education in the Northwest Territory, boasts a history filled with pioneering moments that define not only OHIO, but the caliber of its faculty, staff and students. Each of these moments shines a different light through the lens of Ohio University’s 211 years, and together, they reflect a spectrum of a pioneering spirit that brightly colors OHIO’s history, much like the light that filters through stained glass windows.

In honor of Founders Day, University Archivist and Records Manager Bill Kimok, assisted Curator Jeremiah Myers, an Ohio University Art History student, in creating a display that showcases two such moments in OHIO’s history. In June of 1815, the first Ohio University graduates received their degrees, making that day 200 years ago a landmark for the institution. From a startup school established with one building, one professor and three students in a relatively unsettled area came two graduates who would blaze the trail for all OHIO alumni who followed. 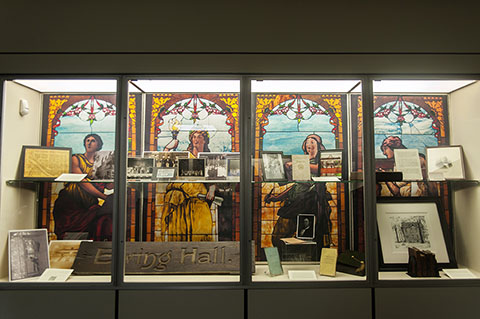 The display case just outside the Government Documents room on the fifth floor of Alden Library houses the display curated by Jeremiah Myers and Bill Kimok. The display includes artifacts and photographs from 19th century life at OHIO, Ewing Hall, and the centennial celebration of the first graduation.

Thomas Ewing and John Hunter earned their degrees following an evaluation by the Ohio University Board of Trustees, explained Kimok. The pair was tested in Grammar, Rhetoric, National and Moral Philosophy, Logic, Astronomy, and various branches of Mathematics. Following a review of their coursework and a general evaluation, the trustees signed off on the graduates’ Bachelor of Arts and Sciences degrees, establishing that Ewing and Hunter had met or exceeded the standards of an education from OHIO.

From that commencement day, the men’s stories take very different paths. Each went on to practice law, though Hunter died the following year in Pickaway County, Ohio. Ewing, however, lived an incredibly storied life, according to Kimok. Born to a Revolutionary War veteran, Ewing earned his own place in history. He argued cases before the United States Supreme Court, and he served one full term as a U.S. Senator from Ohio, before he was appointed as the U.S. Secretary of the Treasury, and later Secretary of the Interior (the first to hold the position). Later Ewing was a consultant to Abraham Lincoln during the Civil War, and he was President Andrew Johnson’s nominee to serve as his Secretary of War; a nomination that was thwarted by the Senate’s refusal to act on it. 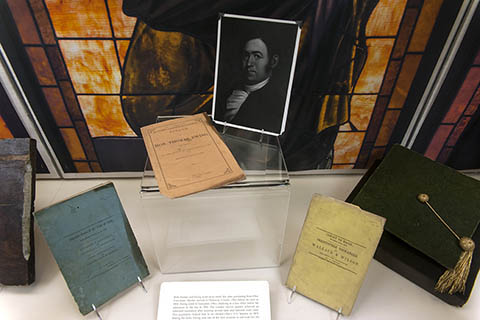 A photograph of Thomas Ewing, one of the first graduates of Ohio University, is on display with artifacts from his career as a lawyer and Senator from the State of Ohio.

Amidst Ewing’s many professional roles, he also served his alma mater by sitting on the OHIO Board of Trustees for 10 years, between 1824 and 1834. A program from the commencement exercises in 1824 is on display as part of the tribute to Founders Day. Kimok says though no program exists from the first graduation, little varied in the pomp and circumstance of commencement exercises between 1815 and 1824.

Ewing’s impressive portfolio of work and his service to OHIO led to a building being named after him on the Athens Campus. Ewing Hall, completed in 1898, was a $56,000 multi-purpose building which provided office space—eventually even including space for the first office of the Ohio University Credit Union in 1955--classroom space, and an auditorium. Kimok says that just the immense size of the three-story building, which was located on the site of what is now the Scripps Hall amphitheater could be spellbinding to new freshmen and other first-time visitors to the OHIO campus.

“Besides its impressive, eclectic architecture, which made the building stand visually apart from other buildings on campus, it had this huge wooden sign out front and big stained glass windows,” explained Kimok. “There was one alumnus who told me that when he walked into Ewing Hall for the first time to register for his classes, he felt so overwhelmed by it that he considered getting right back on the train to return home.”

Though Ewing Hall was demolished in 1974, present day students, faculty and staff may interact daily with the building’s history without even realizing it. The six ornate stained glass windows that line the corridor in Walter Hall were salvaged from Ewing Hall before it was demolished. Two of the windows are made up of a general pattern and the remaining four represent Science, History, Education and Art. 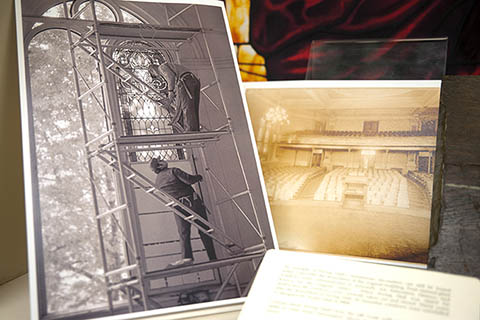 A photograph depicting the extraction of stained-glass windows from Ewing Hall sits in the display case on the fifth floor of Alden Library on Monday, February 9. The windows were removed shortly before the building was demolished in 1974 and were later installed in Walter Hall on West Green.)

One hundred years after the first commencement, another colorful and vibrant personality shone at Ohio University. Irma Voigt, the first dean of women at OHIO, made it her mission to celebrate the 100th anniversary of the first graduates with great fanfare. Having only recently joined the University in 1913, Voigt had already made a name for herself on the campus. Drawing together some 800 University community members and townspeople, she orchestrated a two-day event complete with a parade, dramatic skits and colorful costumes. During “Ohio University Centennial Celebration” the Alumni Gateway, which stands at the northwest corner of College Green, was dedicated.

“Dean Voigt was a pioneer in her field,” said Kimok. “As more women were beginning to attend OHIO and other colleges and universities across the country, the need for professionally trained deans of women was becoming important because women and men were kept separate in so many aspects of their lives outside of the classroom. But besides creating ways for Ohio University’s female students to bond and enjoy social life outside of their academic studies, Dean Voigt also created ways to bring the community and the University together.”

Voigt’s leadership echoed throughout campus, and her inclination to celebrate the centennial anniversary even though she herself was a relative newcomer was not surprising, says Kimok. Voigt recognized the importance of remembering the past and the impact it had on Ohio University’s future. In fact, Voigt was one of the women profiled during the 2013 Founders Day celebration. From Voigt’s great centennial production, the Library will display programs from the event and images captured during the 1915 fete. 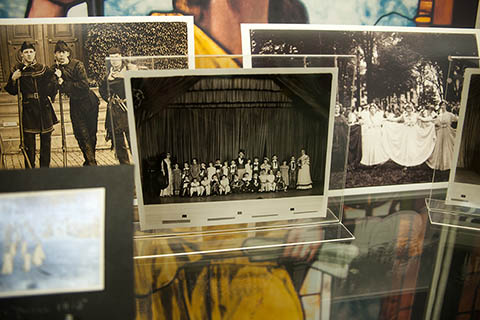 Only four women held the role of dean of women until the position was eliminated in 1962, but it was Voigt’s 36-year tenure that led to many great changes and established new initiatives to improve the lives of all students at Ohio University. At the time of Voigt’s death in 1953, then-Ohio University President John C. Baker said, “She was not only a forceful leader but [also] a maker of tradition and a person who developed a large following. Wherever Dean Voigt is known, her influence has been felt.” And so those words still ring true nearly 62 years later – her influence has been felt and continues to be felt thanks to her pioneering spirit. 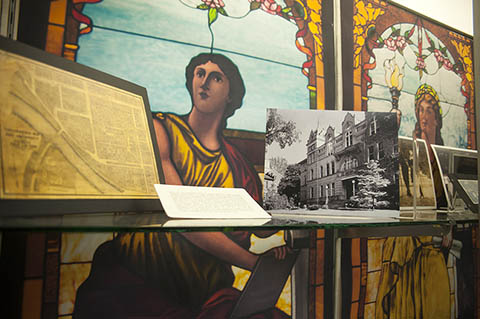 A printed reproduction of one of the Ewing Hall stained glass windows looks over a map of Ohio University from 1911 and a photograph of iconic Ewing Hall in a display celebrating Founders Day 2015.