The Western Library Association (Coonskin Library) in Athens County, Ohio, is one of the earliest examples of a successful social library founded in the Northwest Territory—an honor that is not only significant for the township of Ames, Ohio, but also for Ohio University, which shared its earliest pioneer families, its educational background and its history of books. 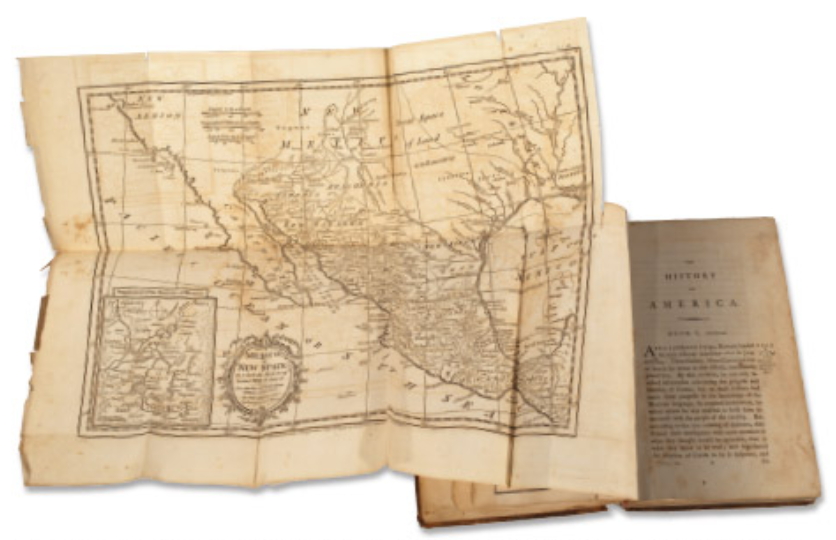 "The History of America" by William Robertson, D. D., principal of the University of Edinburgh and a member of the Royal Academy in Madrid, was among the original 51 books in the Coonskin Library Collection. The book, published in London, features a fold-out map of the southernmost parts of America as it appeared in 1803. Contents include the history of Virginia to the year 1688 and of New England dating back to 1652. Today the book is stored in the Mahn Center at Ohio University Libraries, where it can be viewed and read, but not circulated due to its fragility and historical value.

In 1797, the settlers were, with very few exceptions, New Englanders, and a large portion of the men had served as officers in the Revolutionary War. It would be difficult to find a more educated community in the Northwest Territory.

Among the individuals touched by the Coonskin Library’s influence was Archibald Brown, a member of the Ohio University Board of Trustees; the “father” of OHIO’s Alumni Association and the first salaried librarian for Ohio University. His association with Ohio University was an illustrious one that lasted well over six decades, and began with the influence of the first library in Ames Township.

Archibald, the youngest of 10 children, was barely over a year old when the Brown family moved from Waterford, a settlement near Marietta, to their new home in Ames Township. 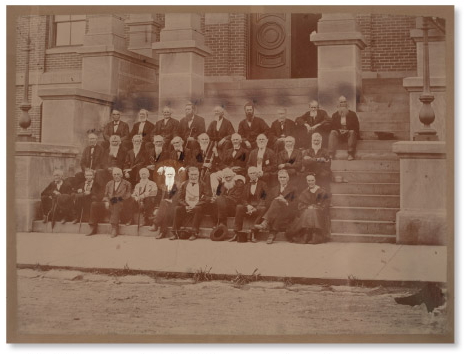 Archibald G. Brown (1798-1892) came to the University at age 14 to enroll at the Academy where he became a charter member of the Athenian Literary Society. Brown graduated in September 1822, and from 1823 to 1825, Brown was employed as principal of the Academy. He later became a trustee of Ohio University in 1841 where he served for 51 years. In 1859, Brown organized the Ohio University Alumni Association.

In the photograph above, taken on the steps of the Athens County Courthouse in 1867, Archibald G. Brown is fifth from the left, on the bottom row.

The 80-mile water route to the Brown family home was an arduous seven-day trip, but a good solution to solving the transportation problem of moving domestic goods without roads. Archibald’s father, Capt. Benjamin Brown, traveled with the family’s belongings in pirogues (large dugout canoes) down the Muskingum and Ohio rivers, up the Hockhocking River and finally to Federal Creek.

The remainder of the Brown family joined the family of Ephraim Cutler, founder of the Ames settlement and son of Manasseh Cutler. The two families traveled on horseback through 20 miles of hand-cut paths that were cleared months earlier by Capt. Brown.

As the Ames community grew, parents worried that their children were not being properly educated. Although a small handful of children did attend school inside Ephraim Cutler’s home, the school term was irregular and erratic, at best.

In the autumn of 1801 or 1802, a public meeting was held and “the intellectual wants of the neighborhood became the subject of the conversation. It was suggested that a library would supply what was needed,” wrote Ephraim Cutler. Unfortunately, the settlers had little money to purchase and to transport the relatively costly books from the East.

“So scarce was money I can hardly remember seeing a piece of coin until I was a well-grown boy” (Hollow & Stone), Archibald said.

The project’s finances were, indeed, a perplexing problem. After extensive discussions, however, the settlers agreed to send their furs, in trade, for books from the city of Boston. 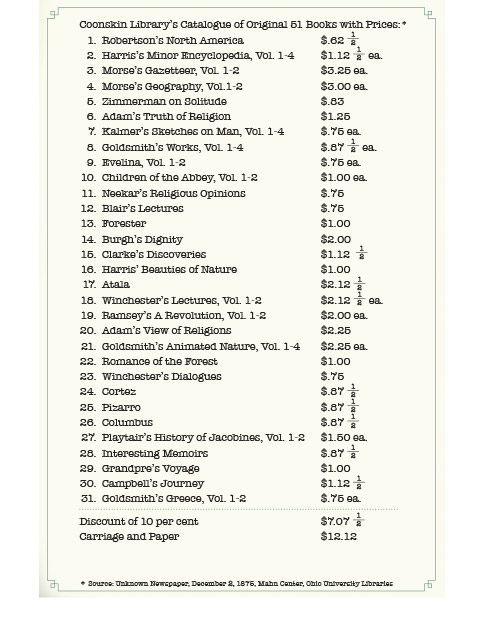 “I well recollect a large collection of bear skins, a wonder in my eyes, [that were] brought to my father’s house to be taken by Samuel Brown” to Boston, wrote Archibald. The proceeds from the furs were “to purchase books for the library. There may have been coonskins [raccoon furs] in the collection, but they were too numerous …in those days” (MSS 51) to take much notice.

A few years earlier, Benjamin Franklin had pointed out that “outside of Boston, there is scarcely a bookstore in all of the colonies worth mentioning” (Nicholson). So of course, that was the communities’ selected book destination.

Samuel Brown, cousin of Archibald, and his wife headed East in the middle of May 1803, and they were gone for about eight months. While in Boston, the couple met with Thaddeus Harris, Harvard librarian and a recent visitor to Ames, and Ephraim’s father, Manasseh Cutler. Both men, well fitted for the task, helped to hand-select books for the small pioneer library.

“I well remember, though very young,” wrote Archibald of Samuel Brown’s return home on horseback, “Coming to my father’s house very early one morning, about the last of December, I think the day after Christmas 1803” (MSS 51).

The neighbors gathered, maybe eight or 10 men with their wives and children, to wait the unveiling of the books. “I was there,” wrote Thomas Ewing, graduate of OHIO, “at the untying of the sack and the pouring out of the treasure” (Nicholson). Everyone was in awe— as if a goldmine had been discovered.

At a cost of $76.50, (today’s value: $1,498.69)it was an impressive collection of 51 books for the small community. History books were the main staple that formed the list. Among the books purchased, 10 volumes were written by Goldsmith, a popular author for the time, who wrote not only about history, but also about poetry and nature.

"The Scottish Chiefs: A Romance," by Miss Jane Porter, is a treasured piece of the Coonskin Collection in the Mahn Center. A leather cover is still heald intact by strings on the inside of the front cover. On the first page are the words, "The Property of the Western Library Association," the formal name of the Coonskin Library in Ames, Ohio. The title page of the book includes these words by Ossian: "There comes a voice that wakes my soul. It is the voice of years that are gone; they roll before me with all their deeds."

Some half-a-dozen books contained religious reflections and moral essays, and “for the inquisitive seeker of facts there was ready Harris’ Minor Encyclopedia, in four volumes,” wrote Ephraim’s granddaughter Sarah Cutler. “While Morse’s Geography and his Gazetteer with their maps supplied any student with a vast amount of information concerning the world.”

Those books became affectionately known as the Coonskin Library.

“The traces of [the Coonskin Library and] its influence are [still] visible in the surrounding community, and it has to a great extent given tone and character to that community,” wrote the members of Athens County Pioneer Association in 1882.