It happened 140 years ago

26 June 1873:  “Day of all Days – Commencement Day for the Class o ’73.  They all do well.  Do not forget any of their peices.  I was so very frightened before I went up on the stage that I thought I would fail completely.  I did much better than I feared.  They cheered me as I went up & I think that helped me.  I received 2 boquets, 1 from Ema & 1 from Kate Dana.  After we are dismissed so many come to congratulate me.”∗

And so the culmination of Margaret "Maggie" Boyd's five-year saga to become the first woman to earn the bachelor of arts degree from Ohio University, as was noted in her diary. It was a long time coming, both for the University and for Maggie. Until April 1, 1868, only men graced the campus. On that date, "M. Boyd," at the age of 23, began her studies in the Preparatory Department—presumably to bone up on Latin, Greek, and Algebra—so she could enter the freshman class in the fall of 1869.

There is no definitive answer as to why she was the one picked to be the first, but certain facts may provide some clues. Maggie's maternal uncle, Rev. Charles Elliott (a Methodist and strident abolitionist) is considered one of the founders of Ohio Wesleyan University in Delaware. Another founder of that university was Rev. Solomon Howard, the sixth president of Ohio University. Howard had been president of the Springfield (Ohio) Female Academy of the Ohio Methodist Conference. Maggie's older brother, Hugh, graduated from OHIO in 1859 and immediately became principal of the preparatory department (the University's grammar school) for one year. Hugh went on to become a Methodist minister and president of Cornell College in Iowa and was even offered the presidency of Ohio University in 1883, which he declined. Maggie's other brother, William Franklin Boyd, graduated from OHIO with a bachelor of arts in 1866, served as an assistant in the preparatory department in 1864, and was a member of the OHIO Board of Trustees from 1907 to 1911.

Nearly all the faculty and officers of the University were Methodists in the years leading up to and during Maggie's enrollment. During this time the Methodists were considered progressive, and one illustration of that trend, originating with the faculty at the University, was to catch up with the times (as well as generate new income) by the admission of women. Maggie, of course, was a Methodist in good standing.

Solomon Howard resigned the presidency of Ohio University in 1872 due to ill health. His replacement, Rev. William Henry Scott, spent his first year and Maggie's senior year as acting president. Scott was a native of Athens County, also a Methodist minister, and was already on the University's faculty. In the small village of Athens, Scott could not help but know the Boyd family through the Methodist Church and about town. Maggie took several classes with him as well.

Maggie and the family had lived in Carthage Township near Coolville, where she and her sisters were educated in the public schools and the Coolville Seminary. Upon her father's death in 1867, the family moved to Athens and lived in a house on Congress Street. Sister Jane taught in the local schools and kept the family home. Sister Kate not only taught (starting at age 19) but also was appointed to the Board of School Examiners in 1871, taught at the high school, and served as the principal of Athens High School for 23 years beginning in 1876. Sister Lucy was also a teacher and for a time taught high school in Jackson, Ohio, under Superintendent Moses Morgan, a classmate of Maggie's. The Boyd house, full of such a family of teachers, also boarded college students and held teas and such for the college girls.

So it appears the confluence of the needs of the University and the wants of women in the guise of Maggie Boyd met and flowered. The institution needed to modernize as well as bring in new funds. Womanhood wanted to transition from the Victorian tenets of gentleness, poise, and devotion to home and hearth to the broader world of independence and professional fields. Maggie showed the maturity, grit, and desire to convince the faculty she was worthy of the experiment. For three years she was the only lady among all the men, surely the greatest test of her fortitude. It was not until the 1871–72 academic year that two women joined her in the college course. By the 1872–73 school year only one other woman shared the college course with senior Maggie: freshman Ella Boyd, Maggie's niece. In 1876 Maggie was awarded a master of art, a proud moment for her with the bonus of witnessing the graduation of OHIO's second woman, the very same Ella.

∗ Executive Vice President and Provost Pam Benoit has generously provided funds for the preservation of the Margaret Boyd Diary.

Experience the Ohio University of the 1870s through the perspective of our first female graduate.
Read the digital restoration of the diary 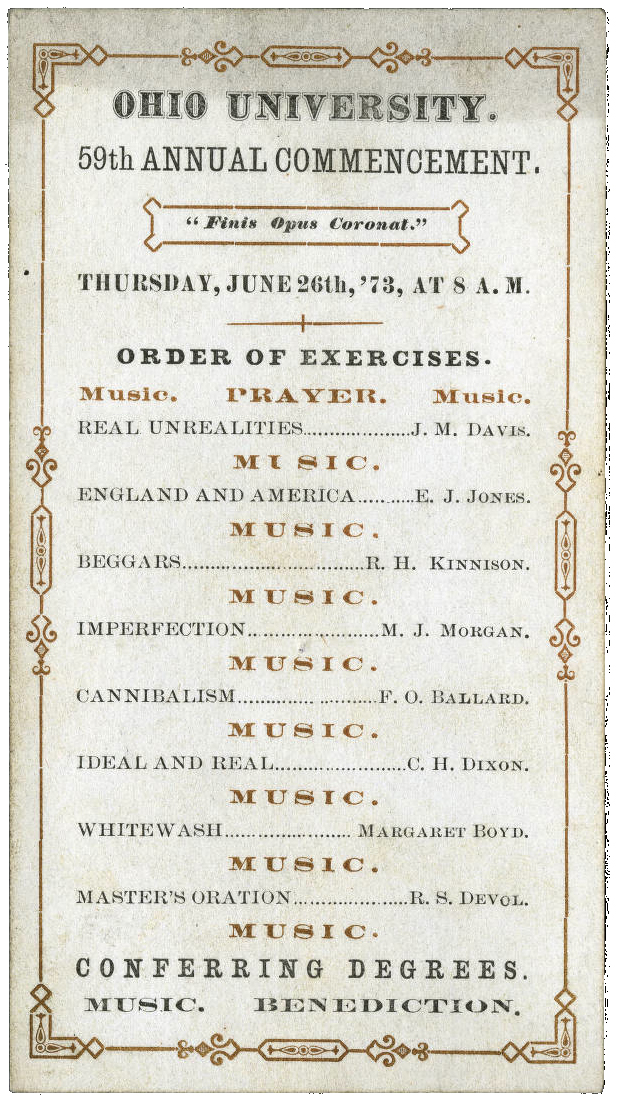