For the Support and Encouragement of a University Therein:
Founders Day, 2012

Founders Day traditionally commemorates the passage of a charter on February 18, 1804 by the newly formed state of Ohio to establish a "university in the town of Athens." However, the 1804 charter was not the first legislative action taken on behalf of Ohio University.On January 1, 1802, the territorial legislature approved a charter for the American Western University, which was the original, albeit short-lived, name for the Northwest Territory's first institution of higher education.

On New Year's Day, the University's initial charter turned 210 years old. Given this anniversary, I propose to shift the focus of this year's Founders Day from a commemoration of the 1804 charter to a celebration of the 1802 charter.

Ranged against the U.S. Constitution, the Northwest Ordinance, and the Morrill Act, the 1802 charter is a modest document. Nevertheless it has significance as an early instance of how the decisions of 1787 were put into motion and as the first milestone on the road that led to Morrill and beyond.

The Northwest Ordinance, passed by the Continental Congress on July 13, 1787, sought to provide a set of principles on "how to manage the national domain."[1] The necessity of public education as a catalyst for good government featured prominently in the document.

One of the University's founders, the Reverend Manasseh Cutler, has been assigned various degrees of credit for the ordinance's authorship.[2] While his exact contributions remain a subject of debate, what is certain is that the Northwest Ordinance emboldened a coalition of self-educated Revolutionary War veterans, such as Rufus Putnam, and Cutler, a polymathic graduate of Yale, to launch an intrepid experiment in public higher education.

A number of events took place between 1787 and 1802 that made it possible to turn a brazen hope into a legislative enactment, not the least of which was the signing of the Treaty of Greenville in 1795.

In the Treaty of Greenville, Wyandots, Delawares, Shawnees, Ottawas, Miamis, and other tribes ceded control of significant portions of present-day Ohio. On Founders Day, we celebrate the traditions and accomplishments of one of the nation's oldest public universities but we also must acknowledge that the ability of the Ohio Company to establish a university was aided by the removal of Native American sovereignty from the Ohio Valley.

Prior to 1795, violent clashes between settlers and Native Americans in the Ohio Valley were commonplace.[3] Worries about confrontations delayed the survey of university townships until after the signing of the treaty. The treaty allowed representatives of the Ohio Company to make progress on the fulfillment of their educational ambitions but it was the beginning of a far darker chapter in Native American history.

A manuscript copy of the 1802 charter resides in the Mahn Center for Archives and Special Collections. I recently had the opportunity to view the document shortly before its 210th birthday. Being able to turn the pages of an object that aimed to set the University in motion was an engaging experience.

The 1802 charter called for the creation of a university that was to provide a liberal education "essential to the progress of arts and sciences[,] important to morality, virtue and religion[,] friendly to the peace, order and prosperity of Society and honorable to the Government that encourages and patronizes them." The charter's language drew directly on a draft charter written by Cutler and sent to Rufus Putnam in 1800. Cutler's involvement in the Ohio Company often caused him great vexation but his enthusiasm for the university project persisted.

The charter is in good condition despite its age. However, given its importance to Ohio University, I want to make sure that the document and other objects relating to early University history continue to be maintained. To that end, the Office of the Executive Vice President and Provost will help defray expenses associated with their ongoing preservation.

From today until the end of February, in honor of Founders Day, the 1802 charter will be on display on the 4th floor of the Alden Library along with additional materials relating to the founding of Ohio University. You also will find links on the special Founders Day Web page to other items of interest that document aspects of the compelling history of our University.

Take a few moments to stop by the library and visit the Web page. You will be reminded of the deep heritage of our institution and its lengthy commitment to excellence and access.

Being able to turn the pages of an object that aimed to set the University in motion was an engaging experience. 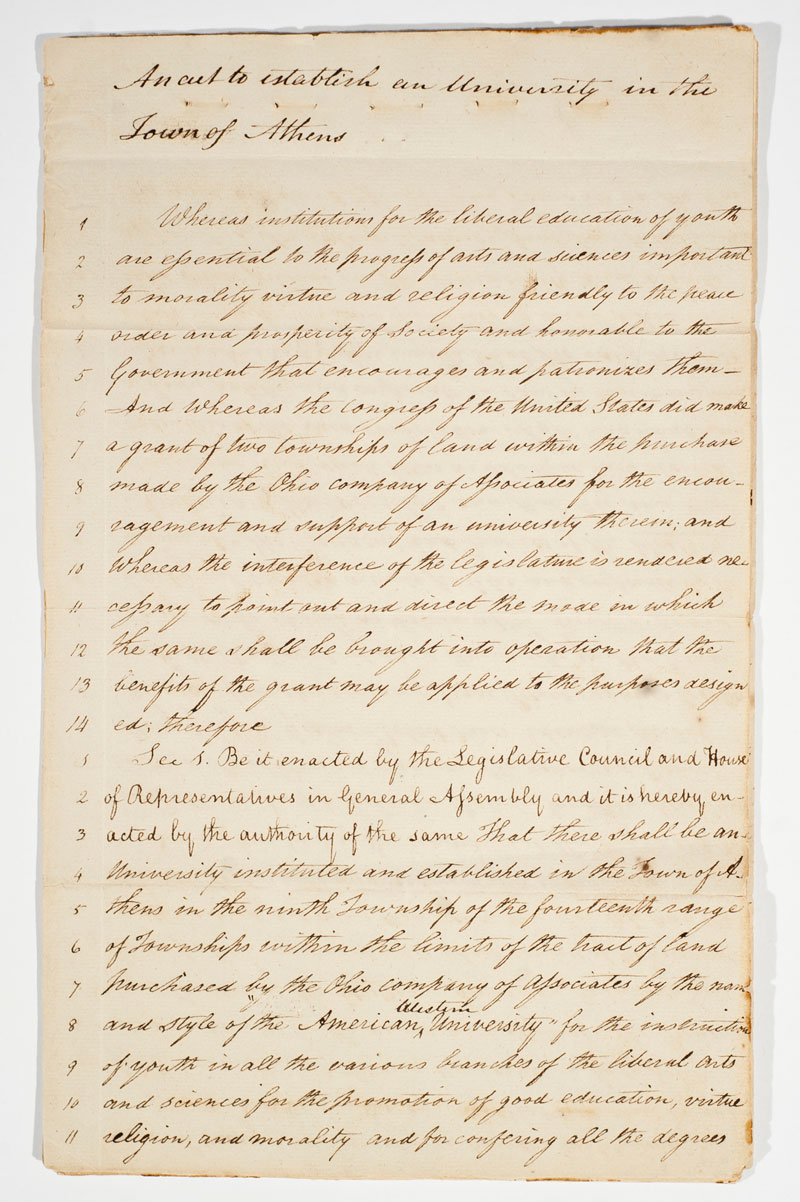 A scan of the original charter document for Ohio University, drafted in 1802.