The Power of the Work

A reflection of the times and self. 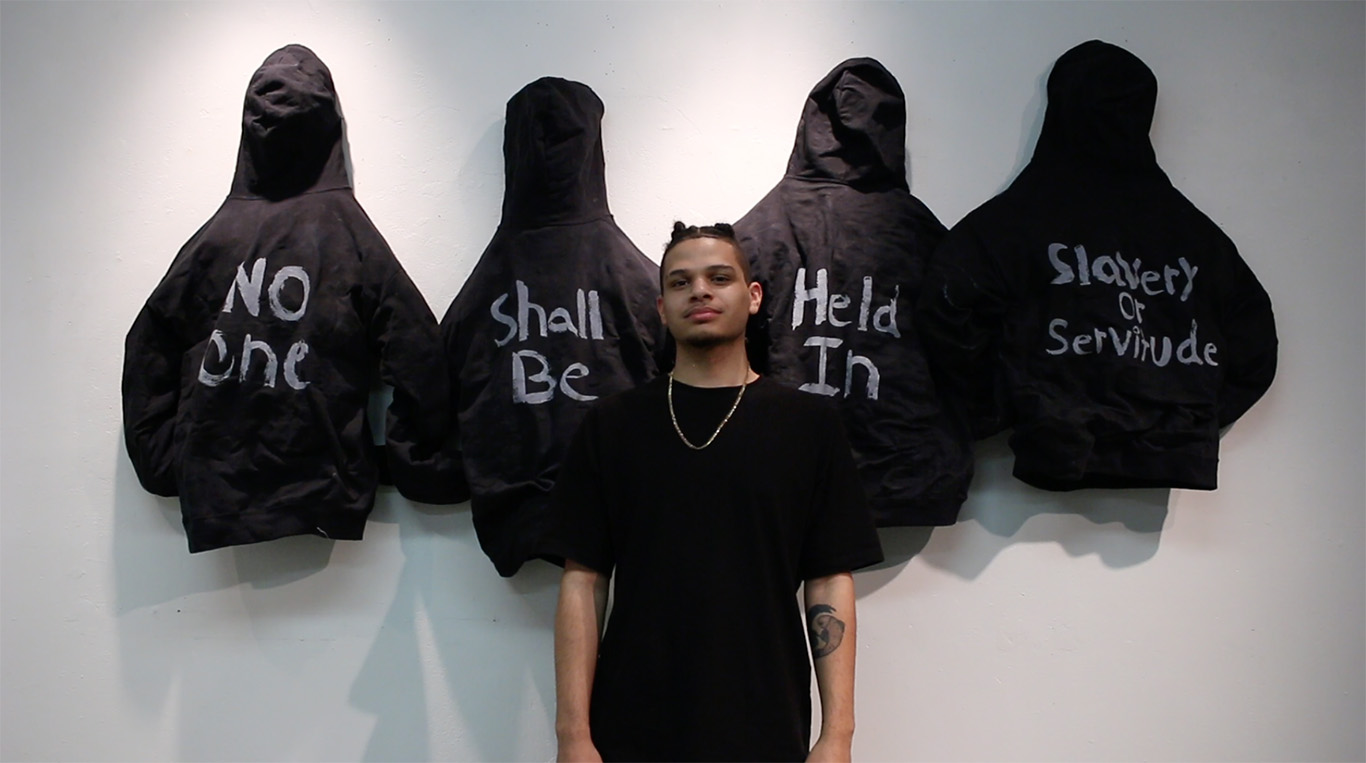 Editor’s note: While an artwork’s true meaning may forever be in question, its impact on the individual is highly personal and unmistakable. The College of Fine Arts encourages its students to use their background, experiences, and personal stories to inform their work. The artist/designer, Kirby Mitchell, called upon his experience as a Black man to create his work "No One." The piece moved staffer, Dale Dorlin, to reflect on the importance of this project both socially and personally. Committed to safe spaces and equity in opportunity, Ohio University College of Fine Arts provides artists the support they need to grow and create the work they are meant to share.

Valued are the moments when a work of art or a performance speaks to you, directly, in ways that others do not. It’s rare and usually happens unexpectedly. One cold morning in February as I was rushing to work, one piece in particular discovered me. That is how I discovered the artist, Kirby Mitchell.

“No one shall be held in slavery or servitude.” These were the words that I saw written in large white letters on four black hoodies. The piece—No One. I stopped. I felt. I had no words. See, to everyone else, a hoodie is an article of clothing that keeps you warm when temperatures suddenly drop. To a Black person, a hoodie adds a layer of threat to your very existence. I could never wear clothing like this growing up; my parents wouldn’t let me. So, I don’t own a black hoodie or any hoodie for that matter. I find myself dressed pretty conservatively, now and then.

Some context—I am a Black male that grew up on the eastside of Detroit, one of the last chocolate cities striving to retain its Blackness. However, throughout my youth, I traveled to the suburbs to attend school at a PWI (Private White Institution).

There, it was apparent by the color of my skin that I was not like the others. I was the token Black student, and as such, consistently felt like the black sheep. No pun intended. I had very few friends. I was bullied and made fun of for doing nothing more than being me.

The same thing would happen at home—the other side of 8 Mile. Here is where I would “play” with kids on the block, but there really wasn’t much playing. As it was apparent by my mannerisms, speech, and the way that I dressed, that I, again, was not like the others, it was more or less another space for being picked on. Later in life, that duality might have been the very thing that helped me stay alive in past situations.

Upon the shooting of Trayvon Martin, the hoodie has come to mean more than just an article of clothing. It’s a statement. And depending on who you are, you interpret that statement quite differently. 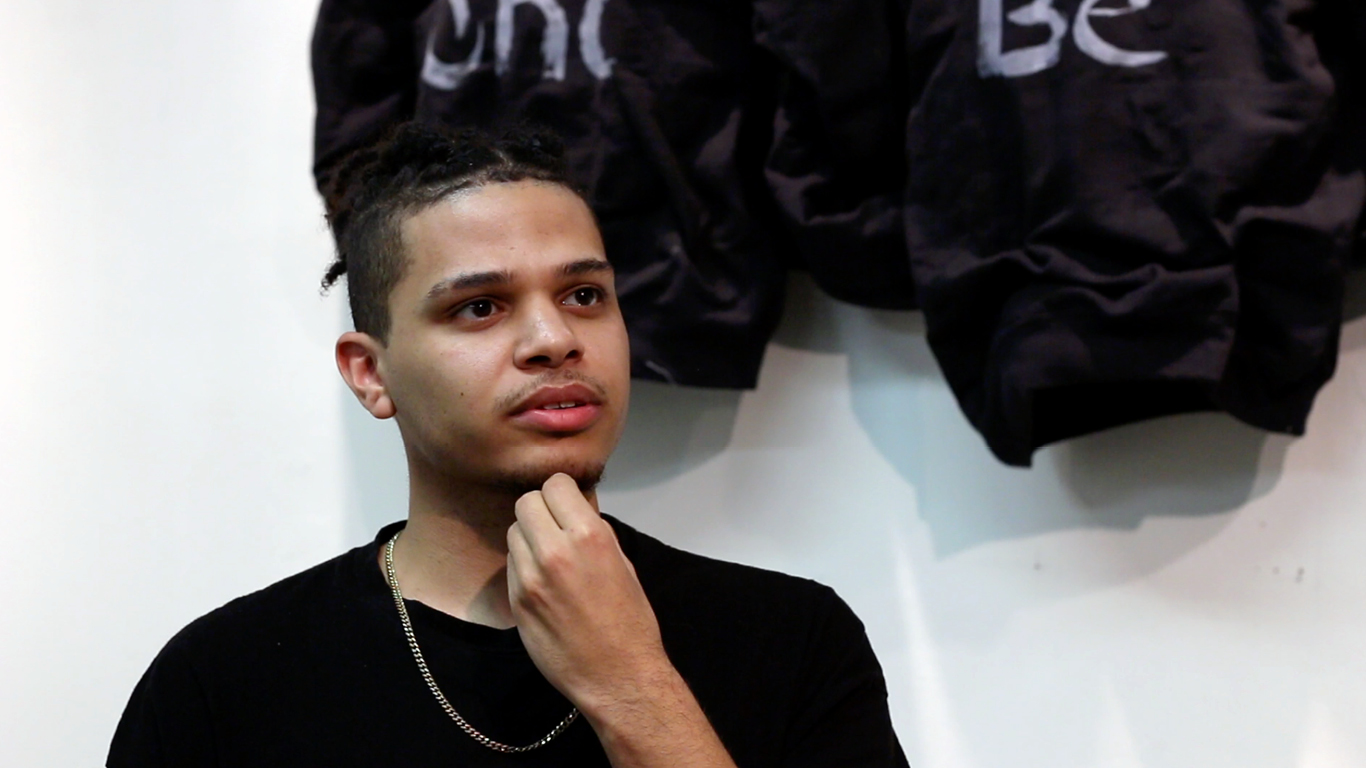 “There have been instances where I've been treated wrongly and falsely accused of something that I haven't done. And at that moment, I have no power, so I can't really fight back. I’m being racially profiled just based off of my hair and my skin color, before I even talk.”

That’s what Kirby Mitchell had to say when I asked him how he felt about his piece.

Mitchell is from Canal Winchester, just an hour or so away from our Athens campus. He, essentially, grew up here and considers Southeast Ohio his home. Since he was five years old, he’s been working with various mediums to create art, a talent that has been passed down from his grandfather who was a woodworker.

As an artist, Mitchell isn’t afraid to fail, because out of failure he gains information and lessons learned—the building blocks to success.

“I'm a take-the-bull-by-the-horns type of person where I'm just like, ‘Hey, whatever comes my way, I'm just going to do it, come hell or high water.’ Every time I do something, I'm never worried about people's reactions.”

Given an assignment to create a reflection of the Universal Declaration of Human Rights, Mitchell was inspired by the black hoodie, and thus, created, No One.

“No One really came to me pretty quickly. I was watching The Hate U Give the night before class. I started thinking about Trayvon Martin and everything representing the black hoodie now. Hoodies are so versatile and integrated into our everyday life, that this message could speak to anyone.”

Mitchell and I share the duality of being raised in both a Black home and a White world. Through art, we find understanding, grappling with complex histories and the never-ending series of unfortunate, yet, current events that plague our communities systemically and institutionally.

“I've been pulled over several times in my life. The 40 seconds it takes for the cop to get out of his car and get straight to me, honestly, my heart skips a beat every time. I'm always thinking in my head, maybe this is the last time.”

As a young man, I was frequently pulled over by police. However, this happened in the pre-Trayvon Martin era, so I never thought that I might have the potential to lose my life when encountering an officer during this interaction. Looking back on those moments when I was pulled over, I would immediately code switch, transforming into a preppy suburban kid like my former PWI classmates. This helped me get away with a lot—speeding tickets waived, let off with warnings, etc. I played the part. The problem here is that I, and the rest of our community, still have to play a part at all.

The shooting of Trayvon Martin increased the amount of fear, doubt, resentment, and animosity the community, this generation, and, moreover, our society has for our police officers. I would argue that there’s never been a correlating mantra of “protect and serve” with their presence, especially in communities of color. We do not feel safe and given our history, isn’t it time we did?

“My humanity shouldn't be put on a table for everyone to look at it. If I get shot by the police, my life shouldn't be looked at as something that went wrong.”

Outside of the training, education, and professional development, the artists here at Ohio University are given the encouragement to tackle complex issues through their work. As an artist, myself, in my previous educational spaces, I was not given this agency. The fact that the students, faculty, and staff strive to have difficult conversations and are committed to racial justice at every step of the way is notable.

“The faculty here push me to do these types of things—that’s really empowering to me. To see that they have a belief in me, to do great things, and really push the envelope.” 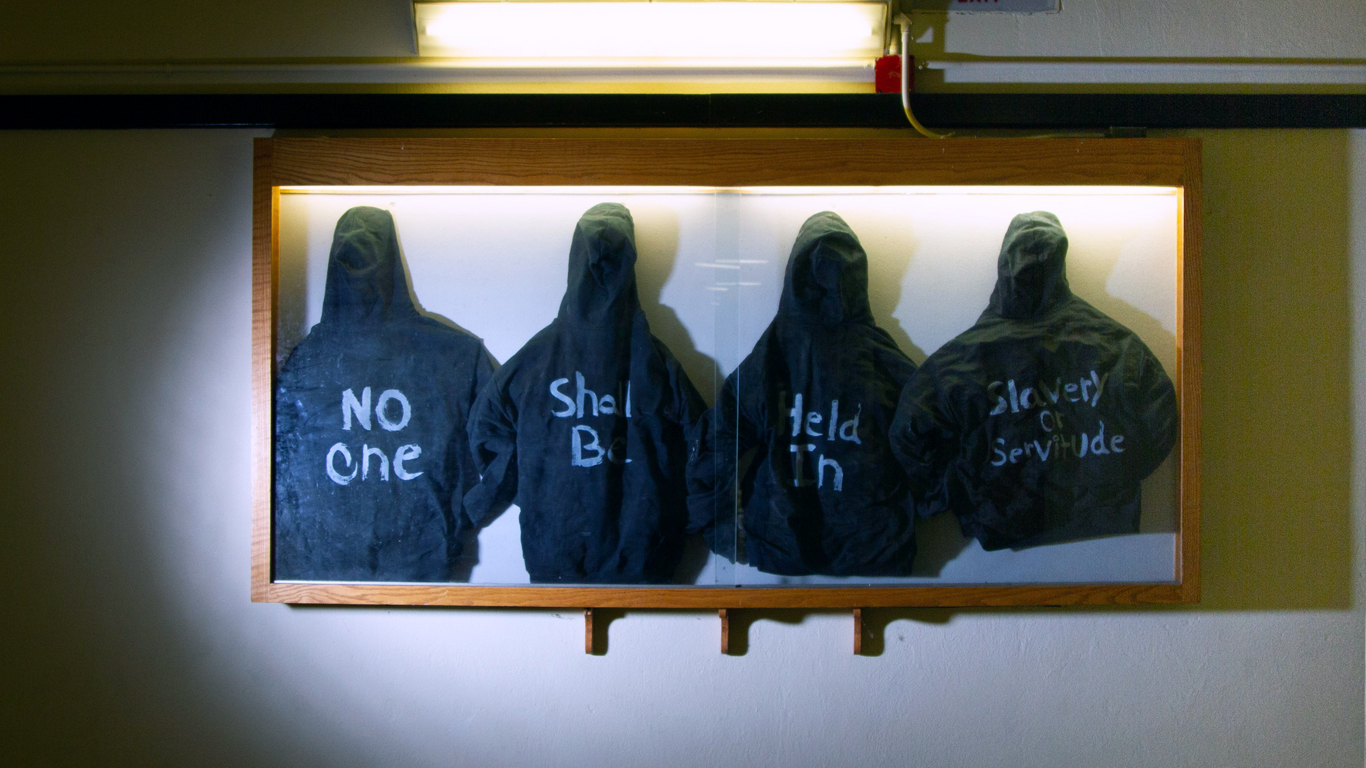 When asked about the takeaway and intent of Mitchell’s work, he said,

“I think my piece really gives hope. The main point that I wanted to get across is that no matter how hard things get, we always push forward and we always believe that there's something better on the other side. Even if the grass gets torn from under us, we always try, which Black culture has done time and time and time again.”

Personally, this piece did give me hope. Art has this unwavering way of giving the beholder just what they need, exactly when they need it—providing solace in the face of trauma. Lives are transformed and the emotions that are produced gives way to change, whether by a smaller emotional release or a tremendous breakthrough. This work is powerful, and the artist will be the one that gives way to the healing of our wounds in whatever shape or form they take.

No One showcases just how sad it is that today the safety of our Black people is often put in jeopardy by those with the charge to protect us. Four black hoodies hold so much weight. I want to thank Kirby for creating a piece that not only is timely, but speaks truth to what it means to be seen as a Black man in our society today.

We are not threatening just because we exist. We are no more threatening than the family that’s walking their Labrador down the street or the little old lady that’s making her way over the crosswalk. And to think of yourself as more threatening, to make the subtle changes in your appearance, speech pattern, or mannerisms for the sake of the white gaze is slavery of the mind. So, to all my fellow Black people, any time you think that you are a threat because of your Blackness, just remember, “No one shall be held in slavery or servitude. No one.”