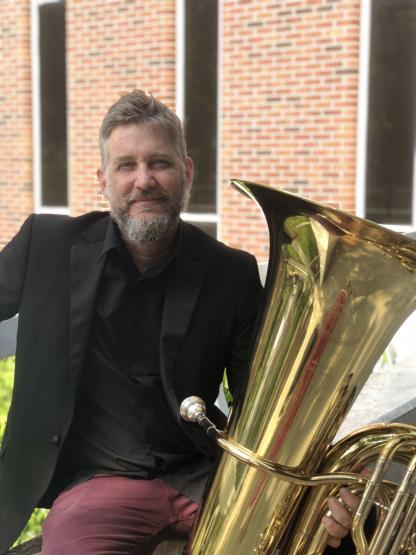 Dr. Jason Roland Smith, professor of tuba and euphonium in the Ohio University School of Music, was awarded the 2020 Gold Medallion Award by the Leonard Falcone International Tuba and Euphonium Festival during its virtual festival on Aug. 8.

The Gold Medallion Award is annually presented to festival guest artists, commissioned composers and special recipients. Smith was recognized as a special recipient for his service to the festival, the International Tuba Euphonium Association and the tuba and euphonium community as a whole.

“I am thrilled to learn that this honor has been bestowed upon our very own Dr. Jason Smith,” said School of Music Director Dr. Christopher Fisher. “Dr. Smith has distinguished himself as an inspiring musician, pedagogue and composer whose service to the field of tuba and euphonium playing and teaching has deservedly garnered national and international attention. The entire School of Music community joins me in wishing him warmest congratulations!”

The Leonard Falcone International Tuba and Euphonium Festival(opens in a new window) is held annually at Blue Lake Fine Arts Camp in Twin Lake, Mich., and contestants come from all over the world to take part in the festivities that feature master classes and recitals by internationally recognized artists. According to Smith, the event is the “cream of the crop” in the tuba and euphonium community. This year’s event took place online due to the pandemic.

Previous recipients of the Gold Medallion include Dr. Brian Bowman, Sam Pilafian, Øystein Baadsvik and Thomas Rüedi, among many other professional players.

“I’m proud to be on the list of recipients for this award, and I view the others before me as mentors to this day,” Smith said. “I think we’re all very supportive of one another in the tuba-euphonium community.”

Smith has been involved in the festival for many years and in various roles, from competing in the Leonard Falcone Soloist Competition in his youth, serving as a faculty member at the camp and acting as a guest adjudicator for the international competition.

In the tuba and euphonium community, Smith is also very active as a soloist and chamber performer at annual regional and international conferences. Most recently, he performed as a member of the brass trio 3Basso, alongside OHIO colleagues Lucas Borges and Joe Brown on trombones, at the 2019 International Tuba Euphonium Conference.

Smith also has served as the chief editor of the International Tuba Euphonium Association (ITEA) Journal, the association’s scholarly publication, and he currently serves on the organization’s board of directors as publications coordinator and as the principal editor of ITEAOnline.org(opens in a new window).

“It meant a lot [to win the medal],” Smith said. “I was very touched while also very surprised.”

Smith has been a part of OHIO for a little over 20 years and maintains a studio of 20 plus tuba and euphonium students. Some of his recent graduates are teachers in schools and universities, music therapists and professional performers across the U.S. and the world.

He is very proud of his students, and being able to see them graduate and contribute to their respected professions as performers, educators or music therapists as well as in other capacities, is one of his favorite aspects about his job.

“I’m proud of the fact that every level of student is in my studio and that the job placement is very high. They all might come in at different levels and they might leave at different levels, and that’s what makes every student special,” Smith said. “But the one thing that they’re good at is their profession, so I’m very proud of that.”