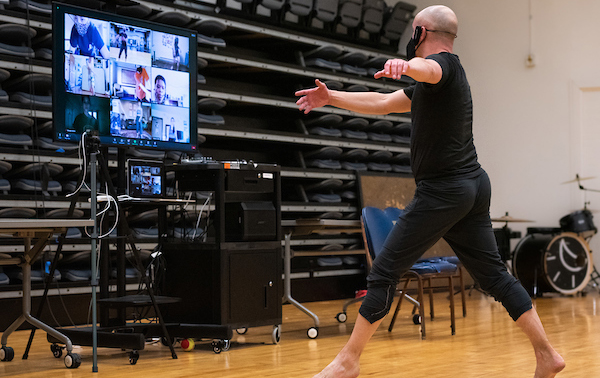 After a year of isolation due to COVID-19, New York City-based choreographer, Brian Brooks, came to Ohio University’s Athens Campus for a weeklong residency with students in the School of Dance. Graduate and undergraduate students were able to work with Brooks in a HyFlex Model, with some students meeting in Putman Hall in pre-set dance spaces based on COVID-19 guidelines while others were able to join via Zoom from their homes.

Chair of Assessment, Chair of Enrollment, and Associate Professor of Instruction in the School of Dance, Nathan Andary, invited Brooks to work with students as part of the 2020-2021 College of Fine Arts’ Visiting Artists and Scholars Series. Andary noted the School of Dance has had many critically acclaimed artists hallow its halls and someone like Brooks add to the history and genealogy of the school.

“Having a top tier artist like Brooks come from New York City to Appalachia is prestigious,” says Andary. “COVID has forced everyone to become technologically inclined and take advantage of the pandemic to become creative and figure out how else can dance be performed, created and presented in a way that is creative and meaningful to self and the field.”

Brooks is the founding choreographer of The Brian Brooks/Moving Company, a dance company based in New York City. The group has toured internationally since 2002 with presentations and residencies provided by The Joyce Theater, BAM’s Next Wave Festival, Jacob’s Pillow, NY City Center’s Fall for Dance, the Guggenheim Museum, Lumberyard Performing Arts, the American Dance Festival, Lincoln Center Out of Doors, and the 92nd Street Y Harkness Festival. Brooks is a Guggenheim Fellow and has collaborated with NYC Ballet Associate Artistic Director and former principal Wendy Whelan since 2012. He has choreographed several off-Broadway productions with Theater for a New Audience including A Midsummer Night’s Dream, directed by Juile Taymore, and Pericles, directed by Trevor Nunn. Recently Brooks has been exploring “telepresence,” as a new technology that enables real-time augmented reality. While performing live in one location, Brooks will simultaneously be streamed in 3D to any location across the globe.

“There is a uniqueness now to being in the same space with people and in the art form of dance: it is really where the art form lives,” says Brooks. “I want students to realize being back in the studio that they did not lose everything. They still have talent, ambition, goals, their gifts, strengths, techniques, and their past history. We are all stronger than we thought.”

For five days in March, Brooks worked with students for 15+ hours daily, covering contemporary/modern dance, composition. He presented a lecture focusing on technology and dance on the last day. Brooks also workshopped with students to inform choreography for his latest project that will premiere at Jacob’s Pillow this summer.

“While Brooks was exploring for his upcoming work, we were able to see him be vulnerable through his movements,” wrote Ria Vahi, Performance and Choreography student. “He encouraged me to be vulnerable with my choreographic process and trust the creation process, allowing me to take his information and add my own artistic expression to that movement vocabulary.”