“It’s slow and I’m not sorry,” is Cara Hagan’s warning before she coaches masked students in the School of Dance through thoughtful movement combinations in a modern dance class.

Hagan, an interdisciplinary artist with a background in dance and film, worked with dancers at Ohio University as part of a weeklong residency in the School of Dance at the end of August and beginning of September. During her residency, she taught undergraduate students in a studio in Putnam Hall how to emphasize mindful movement.

“It’s not just about showing up to do the work but being able to engage the body in a way that there are lasting effects,” Hagan said. “And when you are mindful and not just present, but present and invested … then you get more out of it. You learn more. You grow more.”

Hagan taught a variety of classes throughout her residency as well, such as a community yoga class and a lecture in the School of Film. She led a yoga class in the field behind McCracken Hall that was open to the community on Saturday, Sept. 4, and even set a new dance work on all the first-year dance majors that will premiere at the Winter Dance Concert in February 2022.

Hagan said her love of film and dance began while watching movie-musicals with her mom that were produced during the Golden Age of Hollywood. Her work incorporates themes of social advocacy, nature, and body awareness.

“I think it’s really hard, as a body who lives in the world, to not play with it and make commentary on it,” she said.

Assistant Professor of Dance and Head of Arts Administration Dr. Christi Camper Moore said Hagan’s residency was part of her research that is supported by an 1804 Endowment Grant and by the College of Fine Arts’ Visiting Artists & Scholars Program, and that Hagan was her first choice as a visiting artist for the School of Dance.

“I'm really interested in what we as a field – and certainly what we in the School of Dance here at Ohio University – are doing to not only retain our students and matriculate our students but to immediately make them feel like they're part of our dance community here,” Camper Moore said.

Students said they got the chance to explore their movement and improvise, a refreshing change from more rigid classes they may have taken while in high school.

Makayla Moore, a first-year student studying Dance, Performance and Choreography, said Hagan offered movement prompts like acting like a monster or an octopus, and that allowed her to step “outside the box.”

“In Cara's improv exercise, it allowed me to push limits as my own artist and dancer,” Moore said. “I wasn't trying to match the others around me. It was about what I felt, and I interpreted the prompts she was saying.” 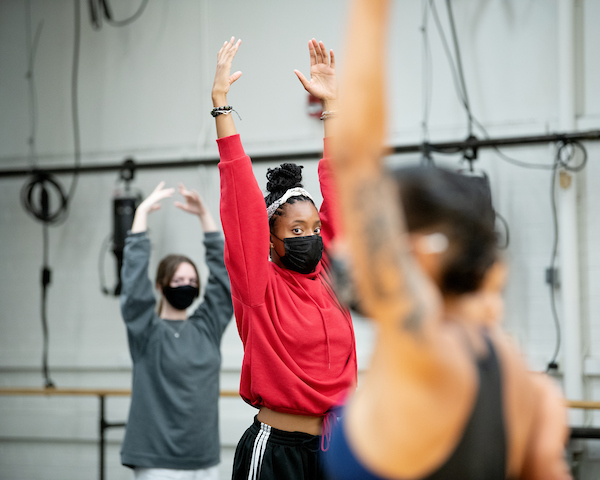 In the midst of dancing during a pandemic, students like Najah Carson, another first-year student studying Dance, Performance and Choreography, are rediscovering what it means to be in the classroom again – whether it’s a lab class or in a dance studio.

“I feel like dance – it doesn’t require a connection (via touch) but … it felt like you needed to be able to touch with partnering and all that,” Carson said. “After these past years, it’s kind of advanced to a different thing.”

Hagan has traveled internationally to countries like Mexico, Scotland, Finland, and India to share her work. She has completed extended residencies at colleges across the globe such as the University of Roehampton in London and the University of Colorado at Boulder. Hagan’s films have also been accepted into numerous domestic and international film festivals. She is currently working on a book titled Ritual is Both Balm and Resistance.