On Oct. 6, students in the Ohio University School of Film (OUSOF) got a chance to speak with producers from Hawkeye Pictures, a Toronto-based production company that has produced award-winning feature and documentary films. Hawkeye Pictures’ credits include Sleeping Giant (2015) which won the Best Canadian First Feature Film at the Toronto International Film Festival and was the Semaine de la Critique selection at the 2015 Cannes Film Festival, the documentary Propaganda: The Art of Selling Lies (2019) and 22 Chaser (2018), directed by OUSOF Assistant Professor Rafal Sokolowski.

The company was founded in 2015 and is lead by veteran producers Aeschylus Poulos and Sonya Di Rienzo. Poulos's career in film spans more than 20 years and includes credits like X-men (2000) and Death to Smoochy (2002). Di Rienzo has produced film, television, and multi-platform content, including co-creating the anthology Little Films About Big Moments (HBO Canada). 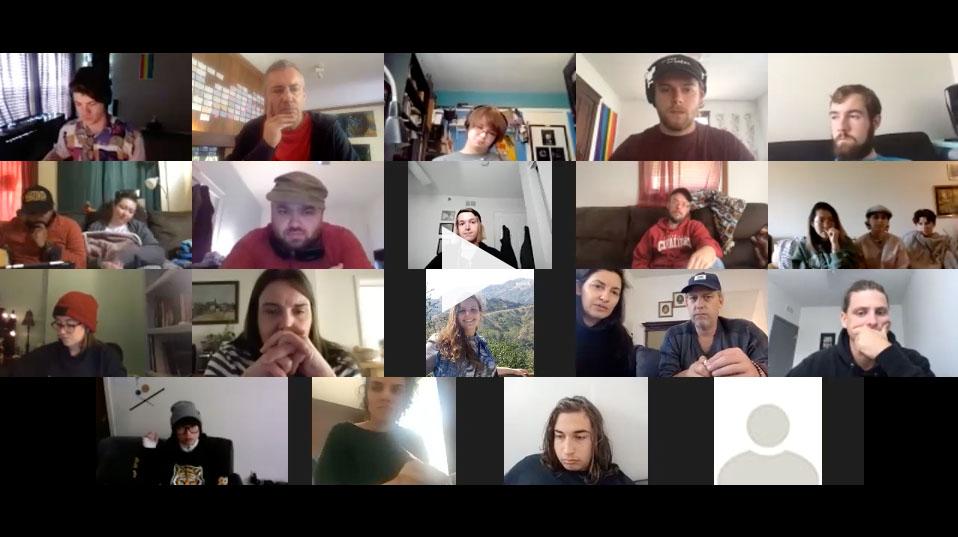 On working with first-time filmmakers

OUSOF: Do you see (your work) as a kind of investment in terms of your company looking at young and up-coming creators and seeing that could be a longer relationship?

Di Rienzo: Yeah, absolutely. It takes a while to create that relationship or figure our your dynamic. Once you’ve seen a bunch of things, you want to see something new so often times, not always, but often times, someone is going to bring something new and exciting that maybe you haven’t seen before. We’re always looking for something innovative.

On making a living in the film industry

Poulos: I think that’s fairly easy but you can’t define what you want to do. There are lots of jobs because there’s a big machine. You can go to Atlanta, you can probably get a job on a production. There are tons of production there. You might not want to be doing that type of making a living, which is working as a technical crew member or something like that. It is harder to monetize and be able to sustain yourself in the toughest positions which are director and writer and even producer if you’re being an independent producer. There are producers that get hired by other people and work and on the ground producers and line producers which actually pay. So when you guys are leaving school it’s always balancing that ‘how do I stay alive’ with ‘how do I keep doing stuff that actually pleases me.’ I think the trick though is having to really like making stuff.

On making the transition from student work to the professional world

OUSOF: When is the best time to approach people like you?

Di Rienzo: It’s a riddle, wrapped in an enigma. But what I will say is it’s sort of the same for us when we’re pitching financiers or broadcasters. When do you go? It really depends, but when you’re starting out, maybe for us, I can’t speak for every production company, but I always say try to have some pieces. Is it a feature-length script and you submitted it to the Austin Film Festival and it’s in a screenwriting competition and it won an award? Or I have this person attached and this DoP has done this. I have these three short films and they’ve all gotten into A-list festivals around the world. Or one of them has gotten into Locarno or Clermont-Ferrand. You have something to show that it’s not just an idea. You have a body of work but you don’t have to have made a bunch of feature films. But it’s something that shows what you’re about, what you’re trying to do.

OUSOF: What exactly do you pay attention to in a portfolio?

Di Rienzo: It depends on the volume. Like, if we have a ton of things to look at the moment, we have to kind of—you want to get back to people so instead of them waiting, you want to see which of these five things am I going to look at first. So sure, sometimes it’s like, ‘Oh, this person has gotten into all these festivals. I’m going to look at that first.’

Poulos: It’s freaking scary, it’s hard. You want to get your stuff out there. I get 150 emails a day; I’d say 50 of them are unsolicited. So as a producer, you’re deciding ‘do I even read this one?’ There’s no science to it. It is a bit of a crapshoot of what gets through and what doesn’t. Some of those emails, I respond to them because something in it has caught my eye or the person writing the email is good with being manipulative and have actually taken the time and looked at my IMDb and even if they’re lying, have said ‘I saw your movie: this, this and this. I love your body of work.’ And I’m like, "Oh, this person has taken the time to research me, I’m going to keep reading their email.' Which sounds silly but there is no science to it.

Di Rienzo: If you don’t have (connections), try to go for it with specificity about who you are and what you’re trying to do. And definitely you should have a link or two to send and say this shows my work. But be bold, have some passion, get their attention.

Poulos: Bold or funny even.

Di Rienzo: But yeah, let it be you.

One of the big takeaways from the talk was that despite a filmmaker’s access and resources, getting a film made and seen is possible, whether in a festival, on an online platform, or by a prospective producer. As Poulos mentioned in an answer to one student’s question: there is no exact science or formula. Emerging filmmakers will face the choice of what to do with their film once its made. Whether or not a student has an eye on Hollywood or starting their own company like Hawkeye Pictures, there are avenues for filmmakers to take that can get their films seen.