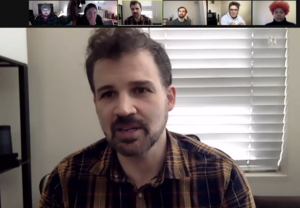 Ohio University School of Film (OUSOF) students recently received some personal insight into the television writing process from a writer involved in one of the biggest shows on TV. Gordon Smith (Breaking Bad, Better Call Saul) visited the film school via Zoom on Jan. 21 as the third in a series of visiting artists and talked with students about his career and writing process.

Smith, a Michigan native currently living in Los Angeles, received his MFA in film and television production from the University of Southern California’s School of Cinematic Arts.

He also acted as consulting producer on the Spanish-language version of the series, Metastasis, and supervised production of the pilot in Bogotá, Colombia. As a staff writer on Better Call Saul, Smith earned Emmy nominations for his episodes “Five-O,” “Chicanery” (which was awarded a Writers Guild Award in 2018) and most recently “Bagman."

OUSOF: What was your journey after film school?

Gordon Smith: I graduated and I was on a terrible—and I don’t mind saying it was terrible. Usually, you don’t say that a job was terrible except they stiffed me on two weeks pay at the end because the show folded—It was an ongoing web series that was very ambitious but not a very good show and so then I was unemployed for a bit. And then I got very lucky. A friend of mine from grad school, from USC, knew somebody on Breaking Bad, knew that they were looking for a PA and put my resume in and gave me a good recommendation. That was season three of Breaking Bad. So I started in the post department and covered half the time in the writers’ office. I’ve been clinging to that stroke of luck for the last 11 years or so. I then moved to writer’s assistant and assistant to Vince Gilligan, the show runner. Then, as that show was winding up, (the producers) said they were thinking of doing a spin-off. I wasn’t sure if I was going to get staffed on Better Call Saul but then as it was becoming more real, the two show runners and creators said they were going to staff me and they did. So, I started out as staff writer and I’ve been there all of the seasons of the show and worked my way up the ranks.

OUSOF: (on writing characters from another show) How do you study those characters and make their voices distinct for Better Call Saul?

GS: In terms of the research, some of it is understanding who these people are as attorneys. My mom and my sister are both lawyers, so some of that was research that came easy. But then there’s digging in and talking to people, interviewing people and my family. In terms of Jimmy and understanding how Jimmy talks (Jimmy McGill played by Bob Odenkirk), we had the virtue of having another show that he was in but also knowing that that character was not the character we were dealing with so it’s this journey of transformation. We had that to base things on. We had that whole history that was the future of this character.

OUSOF: What is your draft process and how many do you go through?

GS: My draft process is a little bit weird. I would say I probably go through two drafts before I turn it in. I hate working from a blank page. I can’t stand it. When we break a story, we put it down on 3x5 cards and those are the beats and that’s the architecture and it’s fairly detailed. So, I take those cards and I put them into an outline and then I write my outline fleshing them out and fleshing them out so there is never a blank page. There’s always cards to start from. I turn my outline in and get notes and fine tune it and turn it in. Then I take the outline and I put that into the script. I take out the stuff that sounds like outline and put in the dialogue that needs to go in. So, by the time I’ve done a draft, I’ve kind of been through all the beats many, many times. Then I turn it in and we have a couple of note sessions with the show runners. Then there’s a production draft. We’re front-heavy on the writing process and we spend a little bit more time than a lot of shows do or have the opportunity to do, I should say. I’m sure everyone would want to if they could. We don’t go through as many revisions I think as a lot of shows do.

OUSOF: How do you find and keep your voice in the dynamic of the writers’ room?

GS: I had the leg-up of having been the writer’s assistant for Breaking Bad for several years before staffing so I sort of knew some of the people and I pitched in that room as well. It is always a process of finding yourself in the room. It’s a question of what people need and what the dynamic is and when you can throw yourself in. And learning when an idea is going to land because there’s just going to be times where it won’t. Your idea might be great, but it’s just not going to find purchase then. If everyone’s discussing one thing heatedly and you go, “but over here, there’s a solution to that.” It may be right but it might not land. In the Saul room I’m not quiet, but I’m not loud. I got the reputation of being quiet but I’m not. I’m not going to talk over people to make myself heard, I’m just going to wait until they stop talking and then I’m going to speak. So, that was how I worked in that room and found how to make myself present for that group of people. All of that is towards how you get your voice in as well, it’s just: be yourself and figure out what you’re contributing and contribute it as well as you can. All of us in the room write slightly differently and we all have different things that we like to do and then it’s just making sure that you know how to get your voice on the page in a way that will survive. You want to do exactly what you need to do because that way, you’re not wasting pages. Everyone is going to take that page count seriously.

OUSOF: Is there something you wish you’d known going into the business?

GS: Oh, that’s a good question. I wish I had known a lot of things going in. For me, my path was one of going, “Alright, I don’t know much and I have a thing I want to do but I’m going to try to learn.” So, I started as an assistant and thought what I should be doing is learning. The machinery of how to make a TV show is so huge, it’s kind of hard to get your head around. I both wish I had known more about it but I also am glad that I had the opportunity to learn it first hand and to learn it first hand from some practitioners that are not only good at their jobs but are very gracious and open and not everyone is gracious and open. The other thing is just being willing to talk to people and not being scared to venture an opinion. I had known some folks that are so nervous about getting something wrong that they don’t want to venture an answer. Just go from your gut and trust it and if you say something and the other person doesn’t like it, that’s okay, you had an opinion. More than half the job is just venturing an opinion. Especially as a producer. The other thing I would say and some people disagree about this, but I would say being nice helps because there are a lot of very talented jerks out there and they will rise to a certain point but being somebody that people are willing to be around has helped me a lot. Be professional, be kind, be a team player.

OUSOF: What have you learned from Breaking Bad and Better Call Saul that you will take forward to other projects?

GS: The process that we use to break stories, I think for serialized shows, is great. If you have the time and not even if you have the time, make time, argue for the time. It’s very writing forward, it’s not very production forward. We spend a lot of time and we are very meticulous of the structure of how we’re breaking the story. You can count on that. By the time we have broken an episode, it’s in such a state that everybody there knows really well what’s happening. You’re building on bedrock.

Smith made his directorial debut with the episode "Namaste" in the show's fifth season. He is currently serving as an executive producer for the final season and working on the pilot for a new series.