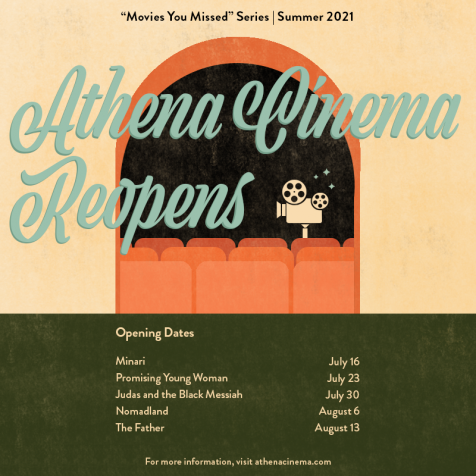 The Athena Cinema will reopen to the public at reduced capacity on July 16 with “Movies You’ve Missed,” a series of films that launched during the pandemic but couldn’t be seen on the big screen until now.

The 106-year-old-art house cinema, having been shuttered because of the pandemic for the longest time since its 1915 opening, will screen “Minari,” a film launched in 2020 about a Korean American family that moves to an Arkansas farm in search of its own American dream, as part of the “Movies You’ve Missed” series. It will also screen “Roadrunner: A Film about Anthony Bourdain,” an intimate, behind-the-scenes look at how an anonymous chef became a world-renowned cultural icon, and the acclaimed documentary “Summer of Soul,” a powerful and transporting documentary — part music film, part historical record created around an epic event that celebrated Black history, culture and fashion.

Tickets to the July 16 screenings of these films can be purchased online here. Due to the reduced number of patrons allowed in the theaters for each screening, the theater encourages advance ticket purchasing through their website.

“We are so excited to open on the 16 and welcome back our patrons,” said Alexandra Kamody, director of the Athena Cinema. “We have missed the movies, the big screen, the patrons, the sound of the projector and popcorn popping…we just can’t wait to get back to showing movies Uptown.”

The reopening comes on the heels of the Athena Cinema’s first-ever crowdfunding campaign, “Lights! Camera! Action! The Campaign to Reopen the Athena Cinema,” which garnered $11,307 more for the cinema’s Athena Cinema Support Fund more than its original goal of $5,000 in the month of June. The overwhelming support from donors helped mitigate the costs associated with safely re-opening the beloved “Jewel of Uptown Athens,” Kamody said.

“We are so grateful for the support we received through the campaign. Our community really came through for us during the closure, with patrons using our virtual cinema and staying in touch by email and social media,” Kamody said. “The response to the campaign was amazing. It has been really energizing to know the community is behind us.”