Since the June 3, 2021 launch of the Lights! Camera! Action!: The Campaign to Reopen the Athena Cinema our truly generous donors surpassed the fundraising goal not once, but twice. Thank you! We are so grateful! We have set a new goal to raise a total of $15,000 by June 30 when the campaign ends. Every dollar donated will go toward reopening the Athena Cinema, serving our community and bringing the finest cinema programming to southeast Ohio! 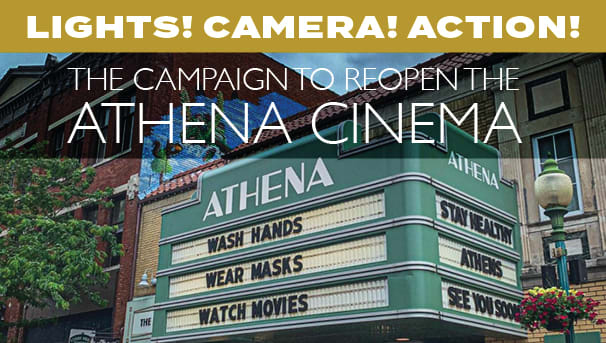 While the ‘Jewel of Uptown Athens’ readies to open its doors, it continues its robust virtual screenings of poignant films, meaningful programming

What I would give to
hush someone in a theater
as they talk loudly.
– Kristen Early, winner of the 2020 Athena Cinema Haiku Contest

The Athena Cinema Fund was established by long-time patrons and supporters Ann Moneypenny and Michael Kleinman through the Kleinpenny Education Fund which is committed to funding non-profits that support creativity, critical thinking, sustainability, tolerance and mental health in Athens County.

As an incentive, Moneypenny and Kleinman will match $3,000 in gifts to “Lights! Camera! Action! The Campaign to Reopen the Athena Cinema,” then once their full $3,000 match is met, give an additional $2,000.

“Ann and Michael’s support has been so meaningful—especially in a year when we lost all box office revenue during the normally busy awards season, but also lost all event sponsorships,” says Alex Kamody, director of the Athena Cinema. “They have encouraged us to support programming that is true to our mission. It’s incredibly important that we have the ability to show films that wouldn’t otherwise be seen in this region.”

Moneypenny says her passion for the Athena Cinema is rooted in how it serves to bring OHIO students and the Athens community together to witness stories and ideas together.

“The Athena Cinema is dear to my heart. Like the Athens Block bricks on Court St. I can’t imagine our town without its perfect marquee,” she says. “But inside its the Athena’s community-focused programming that brings college students and local residents together night after night. It’s screening films that commercial theaters never offer; it’s conversations on environmental and social justice issues that grow our shared bonds in this community; and of course, it is the annual Athens International Film and Video Festival that makes supporting this venue imperative, a joy, and a necessity.”

The Athena Cinema: A history of survival and adaptation

The Athena Cinema opened in 1915 and has survived fires, the introduction of home television and the digital conversion from 35mm to digital projection to name a few. In March 2020, like almost all movie theaters, it closed its doors. The closure reflects the longest time in the 105-year-old Athena Cinema’s history that its theaters were dark, and the iconic Court Street venue was shuttered. In February 2020 it boasted multiple sold-out community events including “The MET: Porgy and Bess,” “A Speakeasy Soiree,” which screened a collection of rare silent shorts accompanied by a local live jazz trio, and an unforgettable Science on Screen® event featuring a live talk by groundbreaking scientist and autism activist Dr. Temple Grandin.

Since that closure, the Athena Cinema did what movie theaters have always done: it adapted to the changing world.

With the support of its patrons and community, it launched the Athena Cinema Virtual Cinema which continued to bring critically acclaimed films and independent programming to its patrons, Athens, and well beyond virtually. Several of its stalwart series also pivoted to the Athena’s new online streaming portal including the Science on Screen® Series and the Sustainability Film Series. It fully renovated its historic marquee, a Court Street landmark in and of itself. The Athena Cinema staff worked with Ohio University’s Covid Operations Team to create and approve safety plans over that allowed it to offer its Private Rentals for Your Pod program where families and those quarantining together could rent a theater and enjoy unlimited concessions for an evening of big-screen movie watching. It pressed on and hosted its Second Annual Haiku Contest where anyone could submit a Haiku poem that reflected their love of movies. Last week, it announced its first in-person event in more than a year: Science on Screen®: Under the Stars, taking its popular Science on Screen series outdoors to the ballfields at The Ridges in Athens starting June 5.

“We come together in these special buildings, we see ourselves reflected, we learn from each other’s stories, we escape, we belong. Independent cinemas need our support." – Actor Olivia Colman on the importance of cinema.

Despite the challenges that go with the physical space being closed, the Athena staff felt energized by the community’s support and the theater’s history of resilience. It eagerly awaits the reopening of its doors, says Kamody, since nothing replaces the energy of being together in a theater and watching a story unfold.

“We will forever be grateful to our truly supportive patrons who have continued to watch films on our virtual cinema, participated in zoom events, supported us through private rentals and more,” she says. “Yet we miss seeing our patrons! We miss the daily conversations and connections.”

Today the Athena Cinema’s commitment to diversity and increased representation in the film industry guides much of the work it does. Through screening international films, films produced and directed by women, films that reflect LGBTQ allyship, and films that reflect racial and cultural diversity, theaters like the Athena Cinema represent and support community resilience and spirit, Kamody says.

“Movie theaters are a place to come together to share our fears, anxieties, joys and to celebrate creativity, “ Kamody says.

More information on how to give online or via check to the  "Lights, Camera, Action! The Campaign to Reopen the Athena Cinema" can be found here.