Jesse Keller (B.F.A. ‘09) grew up in Ashland, Ohio, and earned a B.F.A. in performance and choreography at Ohio University. With her sights set on big city moves, she jumped at the opportunity to dance with a company based in France after graduation. Traveling internationally with Stefanie Batten Bland (SBB), Keller performanced at the Festival Onze Bouge, Les Petites Scenes Ouvertes, Cornell University’s Cultural Residency, The Baryshnikov Arts Center, Symphony Space, The Brooklyn Museum, among other locations over the first few years of her career.

“Early on I was looking for opportunities to dance and really expected, like many young dancers, that I would move to the city, work for one company for a long time, and make my way as a dancer. But as I quickly learned, you have to be able to work for multiple people, and develop a variety of skills. The first two years out of school I was trying many things, even if I wasn’t on stage as a performer, as long as it kept me involved and close to dance,” said Keller.

Keller is now a year-round island resident on Martha’s Vineyard where she serves as director of island programs and education and co-producer at The Yard, a non-profit contemporary artist residency and dance performance center in Chilmark, Massachusetts.

“A big part of The Yard’s mission is supporting artists. The New England Foundation of the Arts supports many events and programs coming through our area, as well as the National Performance Network, a group that is made to support working artists, not only dancers. It’s great to be an active part of that conversation, to know that artists find support from our organization, and often return over multiple years,” said Keller.

This season at The Yard, visiting artists include performing artist Shoshana Bass, dance company Cie Herve Koubi, and The Wondertwins, and musicians Flor de Toloache. The Yard hosts a full calendar of arts and cultural events well beyond traditional dance concerts, acting as a major hub for the arts on the Island.

Internships are another crucial program within the organization, according to Keller, who has seen the program grow since she started with The Yard. Each group of interns, maybe five or six each summer, get studio space, time and room to collaborate, and they can create performances, entire programs, or spend time learning from teaching artists and visiting artists. Each group of interns choose to structure their time and resources differently.

“We get our interns from all over, and we often hire our educators from within this pool of talent. Leah Crosby started as an intern, as did Danielle Doell, and Kimberly Murry,” said Keller. 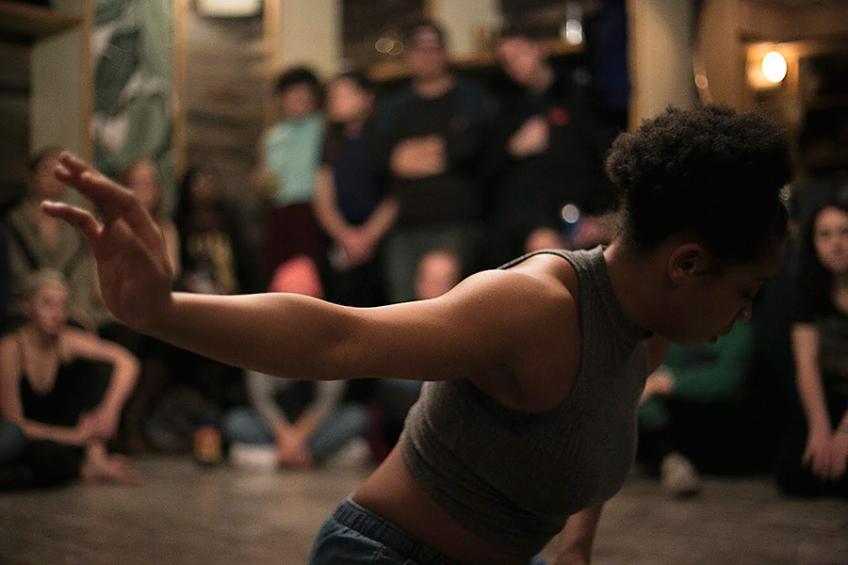 “Essentially I acted like an operations manager, for the visiting artists. I had a part in everything going on in the general schedule, whether I was booking travel, helping artists prepare for their visit, or helping manage daily schedules, it was a lot of logistics. I learned to take on a lot of responsibility, and that experience helped me be a more rounded artist,” said Murry.

Making her way to The Yard by way of Chicago, Murry worked closely with Mordine and Company Dance Theater until 2015, when she landed her internship. Now she lives and works in New York City, a company member of Bodystories: Teresa Fellion Dance, and is in her third season with Dance The Yard. She also teaches pilates in various studios around the five boroughs.

Keller co-directs the internal performance company, Dance the Yard (DTY), with Alison Manning, a choreography partnership at the core of Keller’s creative work since the two started working together, presenting an annual weekend of performances each summer, as part of the Yard Arts season. DTY is comprised of professionals living on Martha’s Vineyard and in New York City, presenting performances for the public, participating in educational residencies and dance making programs for children and adults.

DTY choreographed and performed DISSONANCE on a barge off the coast of Cape Cod, in the fall of 2017. Organized by artist Heather Theresa Clark, with music by Christen Lien, the performance was possible through strong community support and volunteers from the town of Woods Hole, signaling a shared desire for immediate action on climate change.

Through creative partnerships like this, the DTY team has taken advantage of opportunities to push boundaries, create work in unexpected places, and perform for new audiences.

“This winter season we’re working on the development of new works, so besides the full schedule of teaching and programming with The Yard, I’m excited to say we’ll have some new pieces debuting in the summer of 2018.”

She and Murry returned to Athens in March to teach at the American College Dance Association East-Central Conference, hosted by OHIO’s Dance Division.

During the winter season, the studios are closed at The Yard, so programming is spread around the island at offsite locations in the form of teaching and movement activities. Making It is the dance-making curriculum and creativity initiative that is available to all Martha's Vineyard public, charter, home schools, and The YMCA, as well as in area senior centers.

This year, OHIO alumnus Leah Crosby is the only full-time artist/educator, and Keller’s ‘right hand lady,’ as it were.

Crosby teaches creative movement, more like really serious play as she describes it, in response to specific communities of learners.

“It’s movement experience for someone who may not be a trained dancer. I tend to work mostly with the youngest and oldest students, with preschool and elderly communities in senior centers. With older adults it’s about how deep do you want to go into this movement study? Especially when they might not have full movement of all parts of their body. So, for instance, I might challenge them to show me a range of movements within their capacity, to explore different modalities of expressivity, and to engage in movement for the joy of it,” she said.

“I’ll play a game at the senior centers called “pass the move,” to counter fear of mobility, which is common in older adults. Often, people aren’t confident that they can stretch, or move quickly enough to dance. So one participant will do some specific movement, maybe something small, and then I copy it and pass it on to another person in the group, who copies it and adds a little bit to it, and so we go around the circle.”

“We’re interested in raising empathic people. We do choreography and dance creation tasks with our kids, giving them creative problems to solve, so that they begin learning how to be negotiators and how to build consensus. We give these kids the space and permission to engage in expressive movement in really specific ways, it’s a bit like controlled chaos in the classroom!” described Crosby, whose weekly teaching schedule can vary, but usually includes at least a few classes in a variety of locations each week.

Landing her full-time role as artist educator with The Yard was what she calls “being in the right place, right time, showing interest, and just being around.” She puts a lot of emphasis on being present in her local community, a variety of ways— not just by dancing or teaching.

“I just don’t know how people do it in NYC, where the rent is so expensive— here you have quiet space to work. While the art making is easier, the art presenting isn’t. The audiences are very supportive, maybe not very critical, so you have to make your way outside to find that feedback.”

Each new season on the Island brings change. Keller, now nine years out from her undergraduate degree, is just as engaged and excited about dance as ever.

“A dancer/choreographer, can also be an educator, work in development, help build an organization, or do technical production—all of which allows them to remain within the dance world,” said Keller. “This has always been a way to remain actively engaged, for me, and this is what I try to tell my interns each year.”

Formally trained dancers will always have the technical skills they’ve developed, according to Keller, and while those remain essential, they must also embrace wider concerns, the peripheral and logistic components that keep dance moving, in order to become a more holistic member of the field of dance making.

But what about those dry spells, those seasons with less engagement?

“Let’s all just acknowledge it’s going to happen—and accept it.” Said Murry, “sometimes our specific expectations can become limiting. You need to take the limits off yourself. Trust yourself. You have your professional degree, your mind and body are trained, so make it fit for you. Dance has to fit into our lives, rather than us fitting into the world of dance.”