Music to make art by 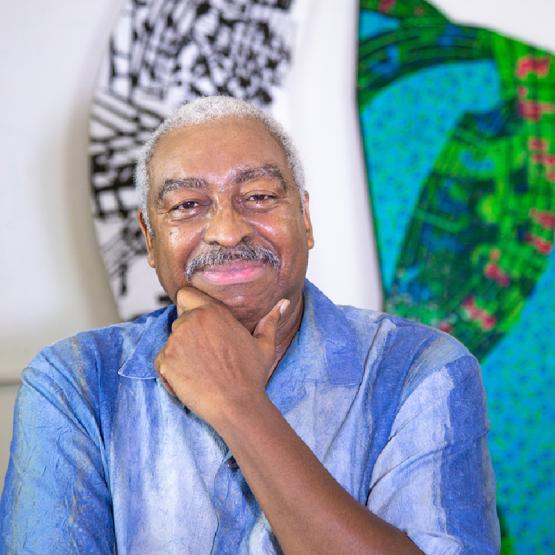 Music suffuses the history of modern and contemporary painting. “The idea that music could be translated into something for the eye,” as Georgia O’Keefe put it, captured the interest of countless painters. Wassily Kandinsky rendered Wagner’s notes and rhythm as colors and shapes. Paul Klee used the process of music composition to guide the composition of his canvases. James McNeill Whistler went so far as to title different series of his paintings as harmonies, nocturnes, and symphonies. And Piet Mondrian drew inspiration from boogie-woogie and jazz to execute his abstract geometrics.

Professor Emeritus of Painting and Drawing Robert Peppers follows in this rich tradition of artist audiophiles. From outside his nondescript studio building in Chauncey, one might pick up a few stray jazz notes in the air without realizing the hotbed of creativity within. But here, amidst Peppers’ Sirens of Jazz sculptural, a steady stream of syncopation and experimentation fills the air.

“When I step through that door,” Peppers says, “I’m in a New York studio in my mind. The music is part of that mirage.”

Peppers’ playlist for making art, driving down the road, and transporting yourself to wherever you need to be follows.

Kind of Blue, Miles Davis
If I’m mellowing out, I start the day with Kind of Blue. I use it to kind of ease into the day.

The Path, Ralph Macdonald
That one you have to experience yourself.

Another Shade of Browne, Tom Browne
I’ve had a chance to see Tom Browne. He came to Cleveland and a friend of mine bought tickets about three years ago. He’s my favorite horn player, a contemporary horn player. Check out Funkin’ for Jamaica and anything on the Hip Bop label.

The Survivor, Donald Harrison
That’s the record I play over and over again. It’s an excellent jazz recording. He’s a constant.

Jazz in Silhouette, Sun Ra and His Arkestra
Sun Ra is one you really have to take time to digest. I listen to Jazz in Silhouette, one of his best orchestrated jazz pieces. It goes from straight up big band jazz to straight up free form jazz. Just a beautiful album. At Stuart’s Opera House [in nearby Nelsonville] they asked me what to pull up when I was hanging work recently. I asked for this.

Edge, Lenny White
This one you should play back to back with Donald Harrison’s The Survivor. Just let one slide into the other.

A Love Supreme, John Coltrane
He and Miles Davis are my idols. I might play him on Sundays, when I put on more mellow types of jazz.

Life on Planet Groove, Maceo Parker
Sometimes I get funky with Maceo Parker. I would recommend Planet Maceo to anyone if you want to boogie.

The Two Sides of Fela: Jazz & Dance, Fela Kuti
That’s for on the road. If you’re going to Cleveland or somewhere, he’ll get you there.

No Room For Argument, Wallace Roney
I had a chance to see him up at Nighttown in Cleveland. He’s really fresh, he does more experimentation with rhythm and blues. He’s basically a protege of Miles Davis. He does really experimental things with rap, hip hop, and jazz.