Music is for Everyone 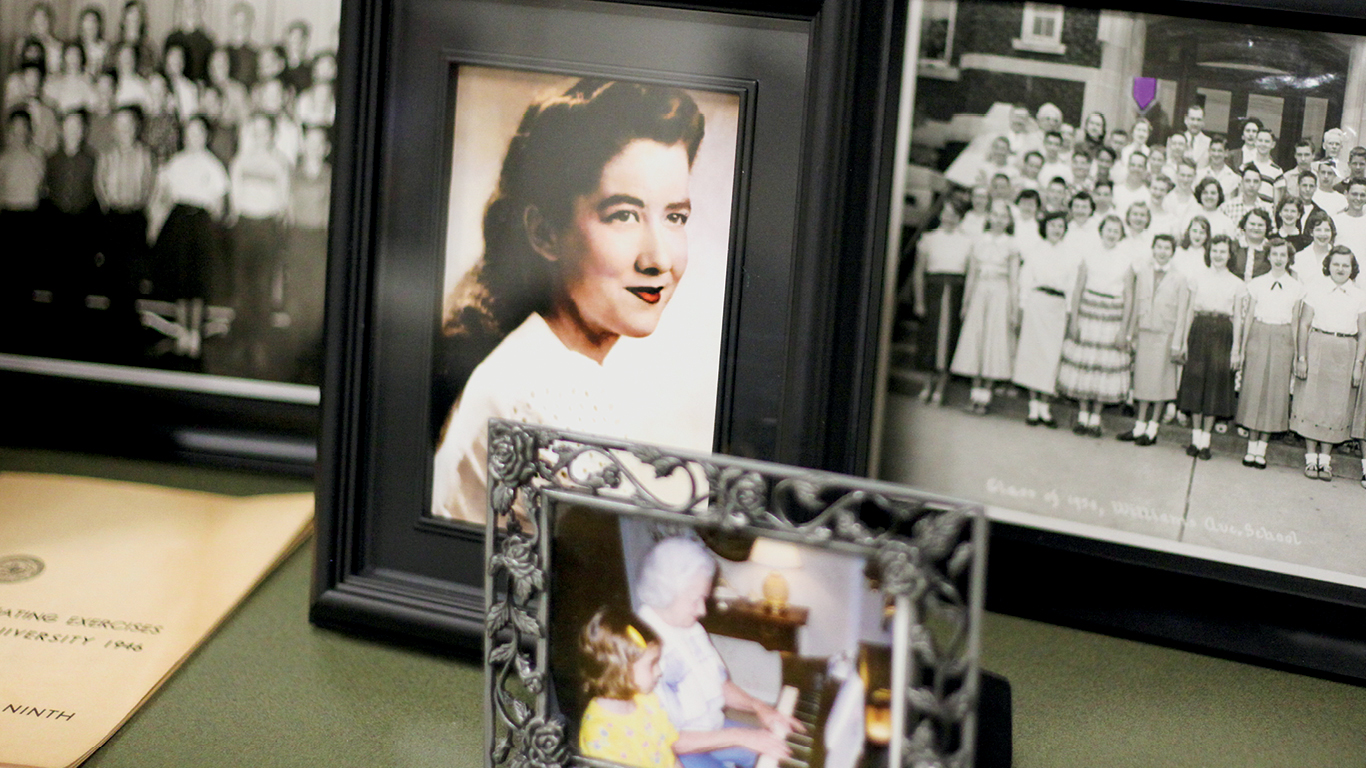 For nearly seven decades, Isabel Courtney Hall’s passion was educating students about music. A gifted teacher, Hall inspired countless students to perform, study, and pursue a career in music education. When Hall passed away in 2015, her family established a scholarship for first-year undergraduates in the School of Music, The Isabel Courtney Hall Music Education Scholarship, to support these budding music educators and to honor her legacy.

Born in 1923 in Chauncey, just north of Athens, Ohio, Isabel Courtney Hall was the second of Helen and Gilbert Courtney’s five children. Hall’s father served as pastor for five churches in the area, so faith and community were guiding principles for the Courtney family. Music was understood to be a powerful, creative force that could bring people together, says Corinne Shaffer, Hall’s niece.

The Courtney household was “a home where there was always singing around the piano,” says Shaffer.

Hall earned a bachelor’s degree in fine arts, music, in 1946 and bachelor’s degree in education in 1947. As a student she was a member of the Women’s Glee Club, the Kappa Beta Sorority, and the Disciples of Christ Foundation. She later married Charles Hall and the two moved to the City of Norwood, Ohio, an enclave of Cincinnati. There, Hall began to teach music with her characteristic energy, first at Norwood View and Williams Avenue Elementary Schools and later at Cincinnati’s Deer Park Junior/Senior High School.

“Finally getting the guts to go in and audition for the School of Music was the best decision I have ever made. This scholarship definitely makes a difference. It would be a lot harder, and a lot more stressful for me and my mom, to make my monthly payments without this help.”

Chris Siegfried, another of Hall’s nieces, says Hall taught her and Shaffer a few musical tricks.

“Isabel loved to play the piano and sing,” she says. “I can remember many years when Aunt Izzie taught me and my sister how to sing in harmony and blend our voices.”

Shaffer recalls one time in particular. Shaffer and her sisters stayed with Hall while their parents went on vacation. “It was extremely hot but she sat at the piano determined to teach us musical harmonies to perform for my parents when they returned. She even bought us outfits to look alike…matching dresses. When we picked my parents up, we were singing in the car all the new songs we’d learned—in harmony.”

“She put a tremendous amount of time into all her programs,” says Shaffer. “Her husband, Charles, was very supportive. He was always there, too. Sometimes when they needed props, he would make them himself.”

Judy White, a former student and the Zion United Church of Christ’s current choir director and minister of music, says Hall was an inspiration.

“I was one of the lucky ones, because I was only 10 years old when Isabel entered my life. She encouraged me to step out of my comfort zone and sing my first solo during a Sunday service,” White says. “Her friendship and influence helped me find a way to become a high school music teacher and eventually the director of the Zion Chancel Choir for the last 20 years.”

With Hall’s support, White formed the adult Norwood Community Chorus (NCC) in 2006. The popular group has performed many times, eventually reaching a peak membership of more than 50 singers. In 2012, Hall helped the NCC get to the World Choir Games, where they were awarded a silver medal.

When Hall’s family decided to establish The Isabel Courtney Hall Music Education Scholarship, they enjoyed the benefit of the OHIO Match, a tool that takes donors’ gifts and makes them stronger.

Private funds provide the lion’s share of scholarship dollars for OHIO students. Providing access and opportunity to any student seeking an education is core to OHIO’s mission. So, the OHIO Match provides $0.50 in matching funds for every dollar committed to eligible scholarship endowments. The program is now in its sixth year and concludes in June 2020. As of December 31, 2019, the OHIO Match program has garnered $12,652,104.81 from donors, with the University providing matching funds totaling $6,326,053.64, netting $1,072,633.66 in support of enrolled students in colleges across the University.

“As I practiced more and learned more I realized how much music had helped me. Music is truly a language we can all speak. I just want to be there to guide student musicians into learning it.”

“We are so thankful to be able to honor Isabel Courtney Hall in this way,” says College of Fine Arts Dean Matthew Shaftel. “She exemplified the spirit of the School of Music by using the power of music education to bring positive transformation to her family, friends, and community. With the foresight of her family and the added power of the OHIO Match, Isabel Courtney Hall’s legacy will continue to bring that positive transformation that music can have through the work of future students studying to become music educators.”

Corinne Shaffer recognizes the Isabel Courtney Hall Music Education Scholarship for what it is: an important tool in supporting students who, like Hall, believed music was for everyone.

“She was very encouraging of other people interested in music and she helped her nieces and nephews go to college. It’s a natural fit, enabling people who have a genuine interest in furthering their music education.”

GIVE TO THE COLLEGE OF FINE ARTS