Esteemed biomedical entrepreneur elaborates on the basics of innovation in lecture

Biomedical engineering entrepreneur Leonard Pinchuk, one of five recipients of the 2019 Fritz J. and Dolores H. Russ Prize, shared his work on the numerous startups he has been a part of, as well as his work with his invention of the Nylon 12 angioplasty balloon last Tuesday during his talk as part of the Russ College of Engineering and Technology’s Stocker Lecture Series.

Pinchuk’s lecture, “The Three-Legged Stool of Innovation, and the Tools that Helped Establish Interventional Radiology, Cardiology, and Ophthalmology,” identified the three legs of innovation needed to transform medicine from predominantly diagnostic disciplines to the therapeutic, minimally invasive practices used today. Through interactive video animations and a couple witty jokes, Pinchuk’s lecture received much praise from the audience.

The National Academy of Engineering and Ohio University awarded Pinchuk and the other recipients in February with the 2019 Russ Prize – the largest bioengineering prize in the world – for innovations in coronary angioplasty, enabling minimally invasive treatment of heart disease.

Pinchuk began his presentation with background on the Corvita Corporation, a company he co-founded, and his work to develop synthetic arteries to bypass diseased coronary arteries. He dove into the first leg of the three-legged stool, which is, “Inventions don’t happen in a vacuum, societal factors are almost always involved.” Pinchuk gave several examples of famous inventors with controversial patents, including Thomas Edison who is credited with the invention with the lightbulb despite the 23 patents on glowing wires prior to his device. Similarly, Pinchuk is credited with the invention of the angioplasty balloon, despite the advancements of scientists before him.

“I didn’t know I did that,” Pinchuk admitted. “The concept of inflating a balloon in the coronary artery was frightening. No one believed that coronary angioplasty would be reduced to practice.”

In discussing the second leg, “Creation, Observation, Interpretation, Iteration,” Pinchuk noted that most inventions come from technologists tinkering, not from basic science and researchers chasing hypotheses; something he had found that to be true in all 130 of his patents.

A large amount of Pinchuk’s research focused on if nylon could be used as an angioplasty balloon. He discussed his invention of Nylon 12, and how in the beginning, he couldn’t find an application for it. Eventually he was able to patent it.

“We’re thinner than plastic wrap, but we can hold 20 atmospheres 300 PSI,” Pinchuk said. “You can jump on these things, they are really, really tough.”

Pinchuk’s Nylon 12 balloon became the platform for the Palmaz-Schatz stent. After entering Cordis Corportation, the company that had acquired Pinchuk’s balloon, into the angioplasty business, his next goal became developing an implantable biomaterial. His research lead to the combining of stents and grafts, of which he explained their applications and how they benefitted thousands of patients.

The final leg of the three-legged stool of innovation was “Personality: Genetic Makeup.”

Pinchuk expressed that anybody can be creative in any field. It’s the part of the right brain that allows humans to create, which to Pinchuk, is a very important aspect to have in life.

He explained his work in lessening glaucoma with the InnFocus MicroShunt. The audiences was shown through a detailed video demonstration how the implanting of the InnFocus MicroShunt works step by step. The operation has been catching on in Europe with over 5,000 patients implanted, and Pinchuk believes it will be approved in America within the next 10 months.

Pinchuk concluded his presentation with an abridged explanation of the topics he spoke about, as well as a thank you to fellow contributors for the research done, and to Fritz and Dolores Russ. His conclusion was met with a hearty applause from an intimate audience.

Patrick Chirdon, a graduate student studying biomedical engineering, found Pinchuk’s lecture to be especially inspiring in both his message and the work he’s done for society.

“I liked that he’s able to connect science to a business idea, especially biomedical engineering,” Chirdon said. “There’s a lot of startups in biotech that really don’t make it, but he’s able to build something really complex and get acquired, so I thought that was really cool.”

The remaining two 2019 recipients will visit during National Engineers Week 2020:

Paul Yock, Martha Meier Weiland Professor of Medicine and founding co-chair of Stanford’s Department of Bioengineering and Founder and director of the Stanford Byers Center for Biodesign

Richard Schatz, research director of cardiovascular interventions at the Scripps Heart, Lung, and Vascular Center, and director of gene and stem cell therapy 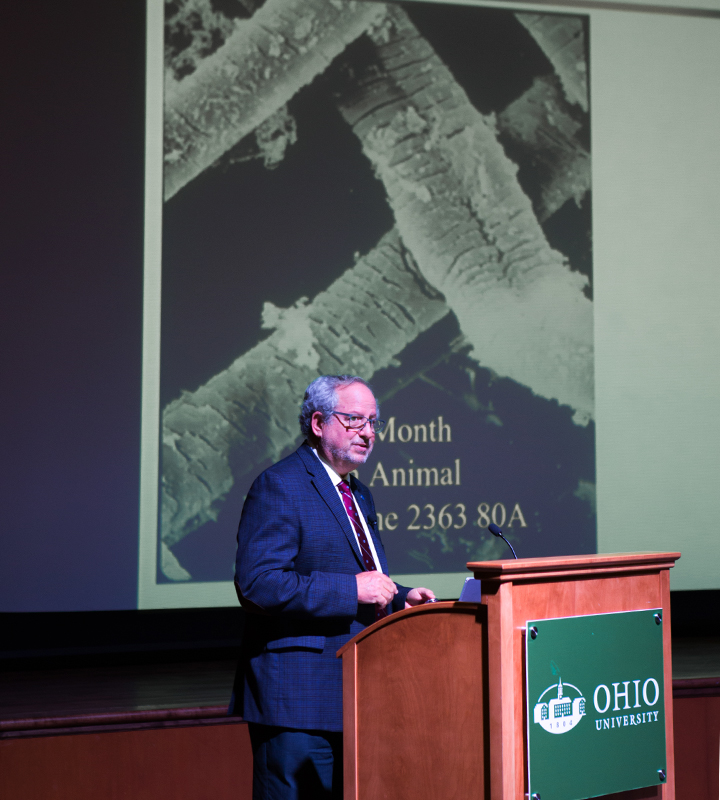