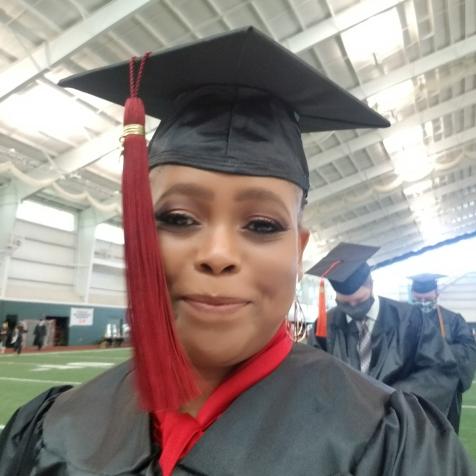 Bridget Selotlegeng earns her Bachelor of Science degree in Restaurant, Hotel and Tourism with a minor in Business this semester. From Gaborone, Botswana, Selotlegeng was offered a permanent job after her culinary internship with Westin Riverfront Resort and Spa in Vail Valley, Colorado. She is currently running the market and taking and delivering in-room dining orders because they are currently in their slow season. But once the season picks up, she will also be working in the kitchen.

Q: Why did you choose OHIO?

My mum Beatrice Selotlegeng had been working for OHIO for 10 years. By then I had decided that I wanted to go to culinary school, so I enrolled at Hocking College, and after my first year there, I decided to also enroll at OHIO and get a bachelor's degree in Restaurant, Hotel and Tourism.

Without a doubt, my mentor is Chef Thom Stevenson. From the first day I walked into the test kitchen and shook Chef Thom's hand, I knew that he was going to play a very integral part in my journey to becoming a Chef. Chef Thom has impacted my life in so many ways it would be impossible to note them all, but Chef Thom believed in me right from the beginning. In situations where I would retreat and become timid, he would be right there to pull my hand and push me forward because he knew I could do anything I put my mind to. Even though he had an incredibly busy schedule, he always made the time to sit down with me and talk to me, see how I was doing. He was and still is a shoulder I can cry on without hesitation or judgement. He always wanted to make sure I was on the right path, and when he felt I was veering off that path he would guide me and make sure I was back on track. Chef Thom always has a positive attitude, and I try to have that same attitude even in times when positivity is nowhere in sight. I truly appreciate Chef Thom, and I know he will be in my life forever, during times of celebration or during times when I need a listening ear and some guidance.

Professor Donald Brown, or as he preferred to be called, Donnie. He was a very fun Professor. He always wanted students to learn about different cultures and food from around the world, not just from the U.S. This impacted me greatly because he asked me to give a couple of presentations about my country in his Food and Culture class, and it was interesting to see how so many students did not know anything about my country or other countries in Africa. But after hearing what I had to say, it changed their perception and instead of them thinking of Africa as a country, they now viewed it as a beautiful continent with 54 different countries, that all had different rulers, laws, cultures, food. So, I make it a point not only to introduce myself but to also talk about my country and try to remove the stigma that surrounds Africa. Donnie showed me that, and I truly appreciate it.

As an international student, we are assigned international student advisors—staff members who make sure that we are doing things according to immigration and abiding by the law. Abby Conder was my international advisor. Abby was a light in my life. Even though she didn't always have good news for me, she always assured me that we would figure things out and everything would be fine. She is a blessing in my life.

I would say the hardest hill apart from Jeff Hill, which was excruciating, is that I was a mature student, which made me the oldest in my classes. Because I had quite a bit of experience under my belt and was focused and knew what I wanted my career to be as opposed to the first years who weren't really sure, I found that they were not as motivated and driven like I was. So, I ended up taking up the role of “leader” in my classes with the intention to motivate but also lead by example. And in doing this I would like to think that I got the respect of not only my classmates, but my professors as well.

Don't miss African Student Union Dinner. It’s a dinner event where all African students come to showcase their culture and food from their respective countries. It's a wonderful and fun event.

I wouldn't say I had specific ah-ha moments, I think every time I went into an accounting exam, or astronomy or economics exams, before the exam would start, I would say to myself, “I've got this” not only for encouragement but because I truly believed it. I always thought to myself, seeing as I decided to leave home and sell my car to come to school, then “I've definitely got this.”