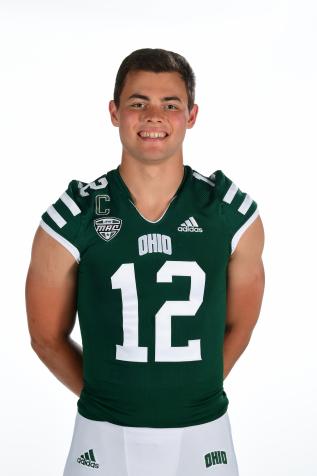 With a record 96 touchdowns under his belt and numerous Mid-American Conference (MAC) awards, it’s no wonder that senior Nathan Rourke aims to bring OHIO football to new levels of success.

The senior quarterback and team captain broke the Ohio University record for career touchdowns (previously 82) during the Sept. 14 game against Marshall University. During Rourke’s three-year career for the Bobcats, he has completed 96 touchdown passes, runs, and receptions — more than any football player in Ohio University’s history. And two games remain this season versus Miami University and Western Michigan University, both MAC Conference games.

“I’ve enjoyed more team success at OHIO than individual accomplishments,” said Rourke. “When it’s all said and done, I’d like to be remembered as a part of the team that got over the 51-year MAC championship hump.”

Two days after the Marshall game, Rourke was recognized as the MAC Male Scholar Athlete of the Week. The Physical Activity and Sport Coaching major maintains a 3.7 GPA in addition to his athletic achievements.

Rourke transferred to Ohio University as a sophomore, and chose his major because it aligns with his interest in football.

“I wanted to stay as close as I could to sports, and this degree allows me to study the specifics of coaching and breaking down skill acquisition,” Rourke said.

Earlier this season, Rourke was recognized as a MAC East Division Offensive Player of the Week. He was also named to the 2019 Maxwell Award Watch List for the second year in a row.

“My plan after college is to pursue football at the professional level,” said Rourke, “then see where God takes me after that.”