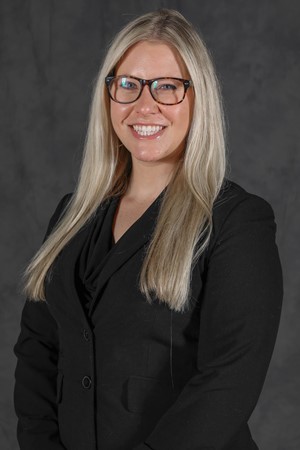 Damaris Linker, who earned her master’s in Recreation and Sport Sciences from the on-campus Coaching Education program in 2016, is The Patton College’s September Alum of the Month. Linker was hired in April as the Director of Football Operations at Bowling Green State University, becoming one of the first female directors of football operations in the country.

Linker played volleyball at Quincy University from 2009-12, captaining the team. She earned Academic All-Great Lakes Valley Conference honors in three of those years. Linker served as a four-year member of the Student-Athlete Advisory Committee. She graduated with two bachelor’s of science degrees in Accounting and Finance. She also has an MBA from Rockford University.

“Damaris was a strong member of our Master’s in Coaching Education program,” said Dr. Dave Carr, associate professor. “She is a dynamic, independent and a hard-working coach and operations specialist, and we are so proud of her and know she will do a great job at BGSU.”