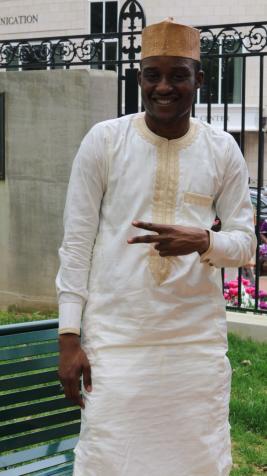 As he pursues his Ph.D. in Higher Education and Student Affairs, Oumarou Abdoulaye Balarabe has established himself as a leader and advocate for international students on campus.

This year, he was honored with Ohio University’s Outstanding Doctoral Student Leadership Award.

“I must say that it is encouraging and humbling that both my student leadership involvement and academic commitment are recognized by the university,” Oumarou said.

In March, the native of the West African nation of Benin co-founded the International Student Task Force at Ohio University, a coalition of student leaders that has raised over $20,000 to support international students affected by the COVID-19 pandemic.

During the 2019-2020 school year, the graduate teaching assistant served as President of the African Student Union, as well as the Programming Board Director of the International Student Union. He was also appointed as a graduate student member of Ohio University’s Diversity and Inclusion Committee, and is the Graduate Student Senator for The Patton College of Education.

Although the 37th annual Leadership Awards Gala was canceled in response to the coronavirus pandemic, The Division of Student Affairs recognized Oumarou’s far-reaching leadership on their website, and wrote that he “has consistently seized every opportunity to be involved wherever he finds himself.”

Oumarou, who is fluent in six languages, earned his bachelor’s degree in African Studies in 2015 from the University of Abomey-Calavi in Calavi, Benin.

He first came to Ohio University in January 2016 to take part in a series of cultural immersion and intensive English classes sponsored by the Fulbright Foreign Student Program. In August 2016, Oumarou decided to stay at Ohio University to pursue a master’s degree.

The Fulbright Program offers research, study, and teaching opportunities to recent graduates and grad students from over 140 countries.

Oumarou earned his Master of Arts in International Studies, with a focus on Education and Development, in 2018. In his two years pursuing that degree, he served as President of Ohio University’s Fulbright Scholars Association.

Now, he is simultaneously working on a master’s degree in Educational Research and Evaluation and a doctorate in Higher Education and Student Affairs.

“My desire to pursue doctoral studies in Higher Education stems from my interest in access and equity issues, student success, leadership and development, and the multifaceted role of higher education in fostering sustainable human development and liberation,” Oumarou said.

Oumarou is a member of the National Association of Student Personnel Administrators (NASPA): Student Affairs Administrators in Higher Education, the African Educational Research Network (AERN), and the Athenian Toastmaster’s Club.

When it comes to balancing his coursework with graduate teaching assistantships, extracurricular leadership positions, and memberships, Oumarou said that organization skills are key.

“Twenty-four hours is just too much if you have your priorities and tasks organized and you follow a schedule,” Oumarou said.

After he earns his Master of Education and Ph.D. from Ohio University, Oumarou plans to teach, research, and consult in the areas of access and equity issues, student success, and leadership and development.

“As a product of some particular teachers, both in Benin and at OHIO, whose works have shaped me,” Oumarou said, “teaching is not just a career for me, but rather a calling to shape the generation that will contribute to shaping a more just, peaceful, and sustainable world.”