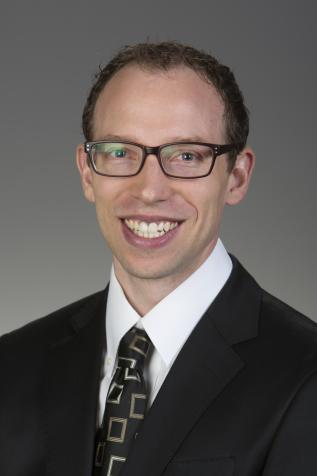 The Patton College of Education is honored to recognize alumni Dr. Daniel A. Showalter, winner of Eastern Mennonite University’s 2020 Excellence in Teaching Award, as our November Alum of the Month.

Showalter is a tenured associate professor in EMU’s Department of Mathematical Sciences. A two-time graduate of Ohio University, Showalter earned his Master of Mathematics in 2011 and his Ph.D. in Curriculum and Instruction: Mathematics Education in 2014.

“I'm surrounded by an incredible community of colleagues here at EMU, and I am constantly learning from them,” said Showalter. “I frequently adopt fairly innovative and unusual teaching approaches and am sometimes insecure about how they are truly playing out—so the award served to bolster my confidence in this approach.”

Showalter was one of three faculty to receive the award, which honors outstanding teachers at the university. The recipients were chosen by a committee after campus community members submitted nominations.

At EMU, Showalter teaches undergraduate and post-graduate courses in the fields of mathematics, computer science, education, and biostatistics. He noted that even before he started studying at Ohio University, he dreamed of one day teaching at EMU. He accepted a job there in 2015.

“It feels natural to integrate my work life with my home life and my personal values. I realize there's also something to be said for separating work and personal life, but for me, I feel more complete when my energies invested in one area can also reap benefits in the other,” said Showalter.

Outside of the classroom, the West Liberty, Ohio, native leads the research team for Why Rural Matters, a biennial national report published by the Rural School and Community Trust, which examines challenges faced by rural schools in the United States.

Showalter began working for Why Rural Matters while he was pursuing his master’s degree at Ohio University.

“It wasn't long before I found my niche in the intersection of rural education and statistics,” said Showalter. “Dr. Jerry Johnson invited me onto the Why Rural Matters team, and I have been honored to work alongside [Ohio University’s] Dr. Bob Klein and Dr. Sara Hartman as well.”

In 2015, Showalter coauthored the textbook “Advanced Quantitative Reasoning,” with Dr. Greg Foley, the Robert L. Morton Professor of Mathematics Education in The Patton College of Education.

When Foley received word that Showalter won EMU’s Excellence in Teaching Award, he noted that it “came as no surprise to us who recall Daniel from his days at Ohio University.”

“We will remember him as a deeply caring and award-winning teacher—not to mention his being a stand-out in the annual kickball games,” said Foley.

Prior to attending Ohio University, Showalter earned his Bachelor of Science in Mathematics from Urbana University in 2002.

While Showalter was always drawn toward the field, a trip to the mountains in Kalahandi, India, solidified his choice to pursue math education at Ohio University.

“I was staying with a group called the Kutia Kondh, and I witnessed how their tribe had been torn apart by moneylenders selling the tribal men into slavery due to their simple understanding of math,” said Showalter. “That infuriated me, and I resolved to somehow empower others by increasing their quantitative reasoning so that they wouldn't get taken advantage of.”

Showalter fondly associates his time at Ohio University with his own personal and professional growth. In Athens, Showalter and his wife bought their first home together and welcomed two daughters to their family.

“Having never had a mentor during my adult years, I was also blessed with not just one but several academic mentors at OHIO. They made it possible, and enjoyable, to transition back to academics after nearly a decade since my undergraduate studies,” said Showalter.

One of Showalter’s mentors while pursuing his master’s degree was the late Dr. Ryan Botts, who earned his Ph.D. from Ohio University prior to teaching at Point Loma Nazarene University in San Diego.

“More than anything, he taught me to remember to see each student as a person with individual hopes, dreams, and anxieties,” said Showalter. “He passed away suddenly this past August, but his legacy will live on in the many students and professors who were touched by his life.”