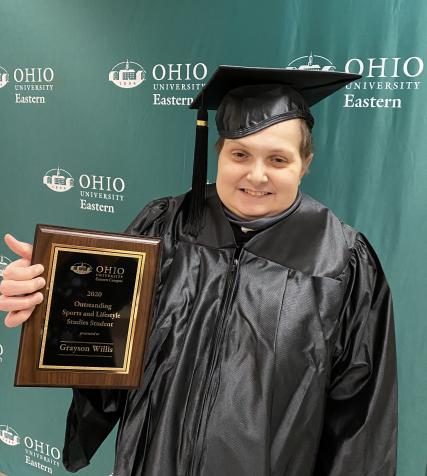 That’s what Grayson Willis has done his entire life. No stopping. No looking back.

“You’ve just got to press forward no matter what the obstacles are,” he said. “The past is the past. The only thing you’ve got is the future. You define your own destiny.”

Willis has defined his destiny, despite multiple life-threatening medical conditions throughout his life. Taking it all in stride, he said he was humbled to finally earn his degree from Ohio University Eastern as a member of the fall semester Class of 2020.

“It’s been a long journey,” Willis said. “I’m just grateful God has given me numerous second chances to finish what I started 6 years ago when I graduated high school. Words just can’t describe how grateful I am and blessed with the people who have been around me for so many years.”

The Barnesville, Ohio, native and eternal optimist has been defying the odds since birth. He was diagnosed with cancer at 9 months old, and again at 22 months. Willis endured chemotherapy and radiation treatment. He was not expected to survive.

His optimism, ambition and drive would sustain him later in life, as more health complications attempted to derail his plans.

Willis enrolled at OHIO Eastern in the fall of 2014 to study Exercise Physiology, later changing his major to Sport and Lifestyle Studies. The following fall, he developed stroke-like symptoms and was found to have a brain tumor and subsequent brain bleed. An MRI found it to be a non-cancerous, benign meningioma, which was surgically removed though a craniotomy and replacement of the brain lining. Just before leaving the hospital three days later, another meningioma was discovered on the left side of his brain which doctors elected to keep an eye on. Months of rehab followed.

While he had to drop a few classes, Willis was determined to continue his education and successfully completed a half course load.

Three years went by and Willis received a clean bill of health, the second meningioma showing no signs of growth. But in October 2018, he was taken to the emergency room for worsening flu-like symptoms that turned out to be meningitis. While in the hospital, he suffered a seizure that left him unresponsive for several days. He was intubated and put on a ventilator. It was unknown if he would regain consciousness.

Willis awoke after several days and was eventually weaned off the ventilator. Unfortunately, he had to withdraw from his courses and would not return the following semester either. Instead, his time was spent in rehab re-learning how to walk due to nerve damage and re-learning how to talk due to partial vocal cord paralysis.

While Willis was able to resume classes in the fall of 2019, he again contracted meningitis and was hospitalized for nearly a month that December. But he never missed a class and resumed his full schedule the following spring.

January 2020 brought its own complications — basal cell carcinoma on his scalp caused from the brain radiation he had as a baby. Treatment is ongoing.

Willis began special driving lessons at Marietta Memorial Hospital to become licensed with using hand controls since the never damage on his leg would not allow foot use on the pedals.

During the fall 2020 semester, Willis fell and a broken hip was misdiagnosed for three weeks. Due to the delay in the diagnosis, surgery was not an option. But he endured with only Ibuprofen for pain management and successfully completed his virtual classes.

Willis officially graduated from OHIO Eastern and his name was announced as an Outstanding Graduate on Saturday, Dec.  12 at Ohio University’s virtual commencement ceremony. He earned a Bachelor of Science in Sport and Lifestyle Studies.

His advisor and professor Kathy Normansell praised Willis’ constant positive attitude and willingness to volunteer whenever a student was needed to represent the SLS program.

“Despite all these setbacks, I have never heard Grayson complain, never ask for special treatment, and always fight to push and prove himself,” she said. “Grayson is a ready participant in classroom discussions, a valued member of team projects, a patient communicator even when his speech difficulties made understanding him over the OULN system a challenge. I am proud to have Grayson as one of my students, advisee and graduated colleague.”

As Willis looks to the future, he hopes to find employment with a sports complex, but is first working on gaining certification to drive with special equipment.

“That’s my main struggle right now, getting back to where I was before the meningitis and nerve damage,” he said.

His ultimate goal is to create his own venue where local youth feel welcome.

“My dream is to create my own sports complex to help out kids in Belmont and surrounding counties,” he said. “Ones whose parents are not around, have anger issues or disabilities, stuff like that.”

As for his time at Eastern, Willis said he felt like more than just a number.

“Everyone is really helpful,” he said. “They will go out of their way to help you no matter what they have on their plate. I wouldn’t choose any other campus in the world. I made a lot of friends, a lot of relationships, professionally and personally, that will last a lifetime.”