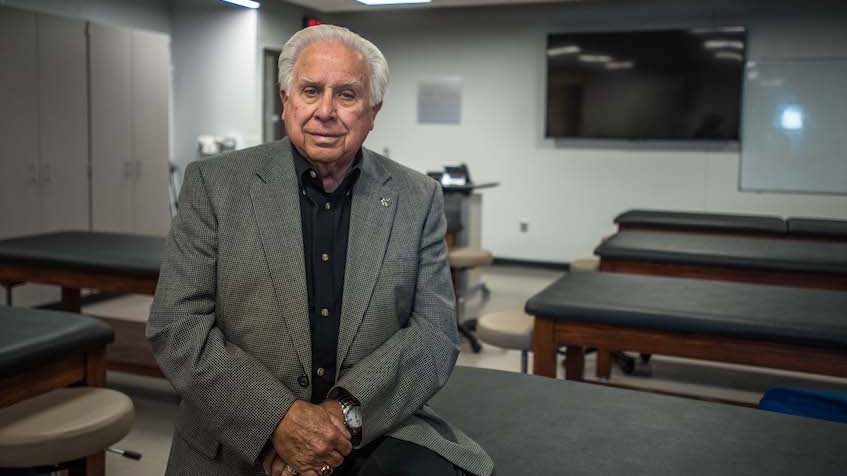 Students accepted into CHSP’s nationally recognized Athletic Training program — and alumni, too — might be surprised to learn that the program as we know it today simply didn’t exist until Charles A. “Skip” Vosler came to Ohio University in 1971. What’s not surprising is that Vosler will be honored in June as one of the newest members of the National Athletic Trainers’ Association (NATA) Hall of Fame.

Under his leadership, OHIO’s Athletic Training program became the first athletic training  program offered in Ohio in 1972 and one of only three offered in the United States at the time.

Vosler served as an assistant athletic trainer with the New York Titans under coach and former Washington Redskins quarterback Sammy Baugh for a season before being recruited as a student athletic trainer at Ohio State University under the tutelage of Ernie Biggs, Lew Crowl and George Nuremberg.

He was hired as head athletic trainer at Defiance College in 1964, where he earned his B.S. in education and attended Ball State University in the summers to earn his M.S. in health education. He then accepted a position as head athletic trainer in 1968 at Ashland University, where he and his wife, Sonnie, expected to settle their family permanently.

They had just finished building a new home when then athletic director Bill Rohr contacted Vosler in August 1971 about coming to Ohio University, asking Vosler during that first interview about his qualifications. Vosler, who was unassuming but always confident, answered, “I’m probably the best athletic trainer in the country.”

The answer satisfied Rohr, as well as Butch Grover and Bob Wren, two former OHIO coaches on the hiring committee. At the time Grover warned Vosler, “You will never leave.”

And though Vosler insisted on one-year contracts those first few years, he indeed never left. Instead, he and his colleagues went on to build an outstanding athletic training program, accepting the first undergraduate class in 1972, and establishing the master’s program in 1977 and the doctoral program in 1981.

One of those first doctoral students, Chad Starkey, is now director of the OHIO Athletic Training program. Of his mentor, Starkey said, “Very few people have given their life to Ohio University with the intensity, passion, and duration that Skip has. His impact on athletic healthcare and the education of future healthcare providers has been enormous. In our world, Ohio University is synonymous with Skip Vosler.”

According to Starkey, 70 percent of students in the undergraduate program go on to earn their master’s degree, and the master’s degree program has a 100 percent placement rate for those who elect to pursue employment. Graduates have gone on to work in the NFL, AFL, WNBA, professional baseball, numerous college and high school athletic programs, private healthcare agencies, and dance and theater companies.

Vosler, who retired from Ohio University in 1997, has seen the program grow from three students to more than 150 and from one training facility in the Convocation Center to the current state-of-the-art facilities provided by the recent Grover renovation — including the Charles "Skip" Vosler Athletic Training Clinical Education Facility named in honor of the pioneering leader of the program. To add to his many accomplishments, Vosler was inducted in 2017 to the Kermit Blosser Ohio Athletics Hall of Fame. Coupled with joining the NATA Hall of Fame, these honors are a fitting tribute to the man whose vision and dedication literally set the course for the athletic training profession.