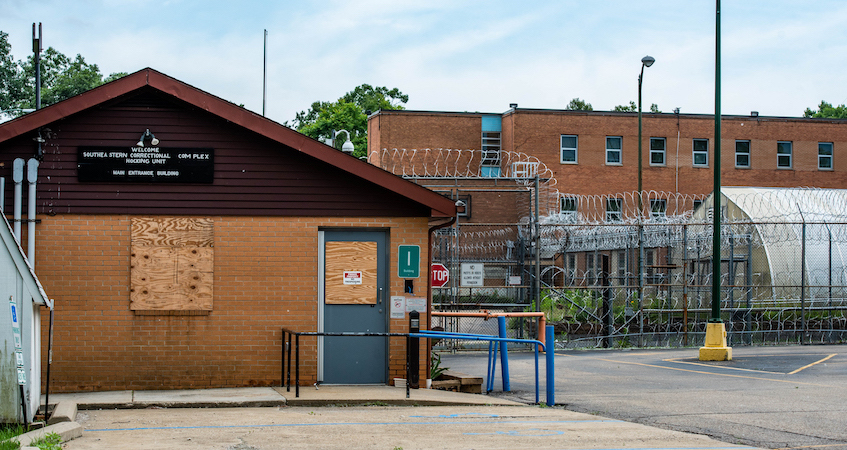 The highlight was an extended tour of the former Hocking Correctional Institution. In early 2017, the state announced plans to close the prison due to operating inefficiencies. Ohio University is among a broad coalition of partners working to convert the prison into a center for medically assisted treatment, crisis housing, inpatient and outpatient therapy for those in addiction.

Following the tour, many of those stakeholders held a briefing meeting with Congressman Stivers to discuss the latest efforts in the process.

“It is crucial that we find ways to address the opioid crisis facing not just southeastern Ohio, but also the state and the nation,” President Nellis said. “The opportunity to repurpose this facility will not only help in working toward that goal, but will do so in a way that minimizes the impact of the loss of the prison and better serves the needs of women in the area who need the treatment that can be offered there.”

Services will be offered to women suffering from a drug dependency in one of the most difficult periods of their lives. Most of those incarcerated will be for misdemeanor or low-level felony charges or as a result of court-facilitated diversion for drug-related offenses. The decision was made to initially reserve the facility for women due to the demand for female bed space and the maternal and child health ramifications for this population.

The plan is to use the first floor of the facility as one similar to a community-based corrections facility. Residents will have more control over their time and access to services like medically-assisted treatment, counseling, job skills training, education, and job placement services. It would be managed by STAR Community Corrections. One of the outbuildings on the property could potentially be used as a dorm for men in a similar setting or as transitional housing.

The second and third floors would be used as a secure living environment for different levels of security and would be managed by the Hocking County Sheriff’s Office.

Shortly after the prison’s closure, Congressman Stivers called a community meeting to discuss options for the facility, and the state sought proposals on how it could be repurposed. The coalition led by OHIO and the City of Nelsonville both submitted proposals. While OHIO’s was chosen, the coalition and city agreed to combine their efforts into a proposal that envisioned a facility that could offer the full range of drug-related services to vulnerable individuals affected by the current drug crisis.

From the beginning, ARP operated with four guiding principles in mind:

DRC has agreed to lease the facility to Hocking County for $1 per year, address larger capital needs for as much as $7 million over the next 10 years, and support jail start-up costs during the first few months of operations.

Operations and services will be funded by a mix of sources including Medicaid, private insurance, grants and fees. Ohio University researchers will soon complete a feasibility study that will affirm the project’s viability.

With a lease for $1 per year, support from DRC for capital and jail startup costs and funding for services from a mix of government programs, grants and private contributions, and the active support of local providers, ARP believes it will achieve the vision within the guiding principles listed above for an innovative model of care to give new hope to people affected by the drug crisis.