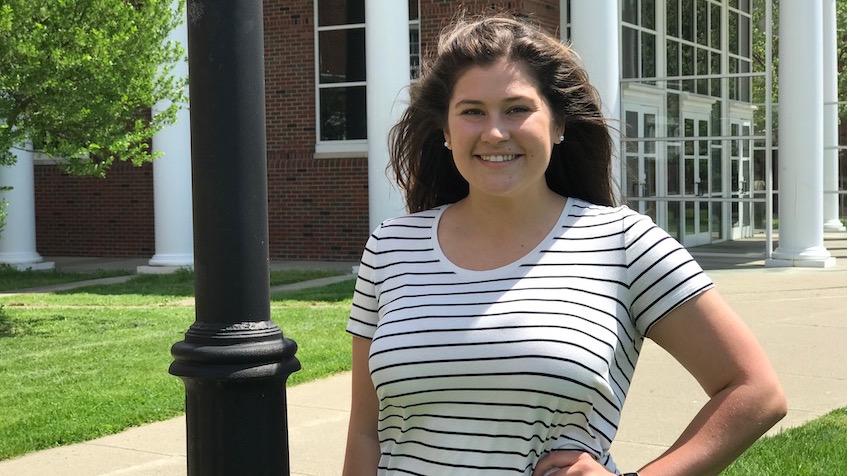 Kylie Harper eyed the golf ball at her feet and felt the ground move slightly under her shoes as she started her backswing, the sun gleaming off her metal club as it moved.

In that moment, the tranquility of what was to be another smooth shot at the Ohio University Driving Range was disrupted by the roar of tires sliding on gravel behind her and a cry for help.

Harper, an exercise physiology graduate from Ohio University’s College of Health Sciences and Professions, reacted instantly as both her training and her instincts took over.

Harper’s feet slid to a stop in front of a four-door sedan. There, a man held a small, 7-year-old girl in his arms; her mother frantic beside her.

The little girl was not breathing. She’d become unresponsive after suffering a seizure.

“Does anyone know CPR?” Harper heard.

“I do,” she answered with an arm raised.

Harper said she expected some of the handful of others who had gathered around the scene to also respond in the affirmative, as her days as a lifeguard, student in exercise physiology classes and as a personal trainer for WellWorks, all involved having others around her who were also proficient in CPR.

On Saturday, April 20, however, Harper was the only one with her hand up.

Wasting no time, Harper removed her sweatshirt and placed it on the gravel underneath the child. She checked for a pulse and looked for signs of breathing — she found neither.

Harper interlocked her hands and positioned them over the girl’s chest. She began to press down and release.

One and two and three and four and five …

“You got this. Keep going,” a man’s voice encouraged from behind.

After 30 compressions, Harper closed the girl’s nose and breathed into her mouth. The girl’s chest raised slightly, letting Harper know that air was entering her lungs. Thirty more compressions and two more breaths were made before the girl started to respond.

By now, a crowd had gathered from the nearby ballfields on West State Street in Athens, Ohio. Someone had called 911 and deputies from the Athens County Sheriff’s Office arrived to the scene.

Although the girl had not regained consciousness, her pulse was strong and she was breathing on her own. OhioHealth O’Bleness Hospital is close by, and Deputy John Morris decided to rush her there himself. According to Sheriff Rodney Smith, the girl was alert before Morris left her side.

As the crowd in the driving range’s parking lot started to disperse, many took the time to thank Harper for her efforts. Still stunned from the incident, Harper went back to her clubs and hit a few more balls. The gravity of the situation didn’t really sink in until she was back in her car and called her mother to tell her what had happened.

“She was choked up and she was proud of me,” Harper said of her mother. “It’s a good feeling to be able to help someone.”

“I’m proud of myself and proud that I chose this field,” Harper added. “Seeing the impact it had that day, it makes being a 15-year-old lifeguard, getting into the exercise physiology field and being a personal trainer all worth it.”

“It’s the way we’d want all of our students to react,” Dr. Paul Chase, PhD, ACSM-CEP, EIM-III, RCEP, an assistant clinical professor of exercise physiology said. “We’re proud of her for stepping up and helping. I think it’s amazing that she did that.”

Harper commented on the bravery of the girl’s family, saying they handled an “emotional, intense moment” as best they could and added that she hopes they are all OK.

According to Athens County Sheriff Rodney Smith, the 7-year-old girl was transported to Nationwide Children’s Hospital before Morris could return to her with a teddy bear as a gift. She was later released from the hospital and is reportedly back home with her family.

When asked how she thinks she would act if in a similar situation again, Harper said, “I will act. Just act. No matter what, you have to act and trust in your training.”

On Saturday, May 4, Harper graduated from Ohio University, carrying with her the education and confidence to create a foundation for her future. Because of her actions, another little girl may one day be able to do the same.

“I’m thankful I was there at the right time and confident enough in my skills and understanding of the urgency of acting in that situation — which is something I learned at OHIO,” Harper said.