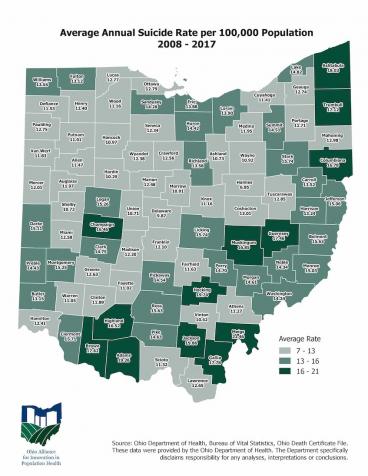 More than 15,000 suicide deaths reported in Ohio over 10 years, an increase of nearly 24 percent

According to a new study released by The Ohio Alliance for Innovation in Population Health (The Alliance), its identity is increasingly comprised of individuals both young and old, with suicide rates rising more than 36 percent for those ages 20 to 29 and approximately 57 percent for those aged 60 or older in the last 10 years.

Such trends are disturbing to mental health organizations across Ohio, including the Ohio Department of Mental Health and Addiction Services.

“The data in this report is very relevant to the work of the Ohio Department of Mental Health and Addiction Services,” said Lori Criss, director of the Department of Mental Health and Addiction Services. “Suicide is a serious public health issue. Tackling this issue in Ohio will require collaborative efforts that cross state government, private partners, community mental health and addiction boards and providers, colleges and universities and others.”

The Alliance — a collaborative effort created by Ohio University’s College of Health Sciences and Professions (CHSP) and the University of Toledo’s College of Health and Human Services and now including 28 partner organizations— recently completed a review of suicide fatalities in Ohio based on data provided by key state partners between January 2008 and December 2017.

Rick Hodges, director of The Alliance, said that 526,501 years of life expectancy was lost in Ohio between 2008-2017 due to suicide. He noted that this sobering figure is largely attributed to the increase in suicide rates of individuals 29 years of age and younger.

“The Alliance’s research indicates that the suicide rate within our state’s younger population (29 and younger) has increased by 33 percent since 2008,” Hodges said. “Our ultimate hope is that this study will help to inform state- and community-level discussions surrounding how the risk of suicide can be reduced in Ohio and beyond.”

Hodges also referenced a June 2018 Alliance study that calculated more than 500,000 years of life were lost in Ohio between 2010 and 2016 due to opioid overdose.

Orman Hall, executive in residence for CHSP and author of the study, said that The Alliance’s research revealed a total of 15,246 suicide fatalities in Ohio between 2008-17, an overall increase of approximately 24 percent per 100,000. White individuals who reside in economically distressed Appalachian communities continue to exhibit the highest suicide rate in Ohio.

Hall emphasized that the intent of The Alliance’s study was not to serve as an exhaustive study of cause and effect, but rather to analyze the scope of suicide fatalities and to identify key demographic characteristics of decedents for this serious and growing problem.

Although the highest suicide rates were experienced in Ohio’s Appalachian region during the 10-year period that was studied, it is important to note that both rural and suburban areas experienced the greatest increase in the rate of suicides per 100,000 population. Cuyahoga (1,461) and Franklin (1,408) counties were home to the highest total number of suicide fatalities in the study.

Tony Coder, director of the Ohio Suicide Prevention Foundation (OSPF), reported that OSPF trains as many community members and healthcare providers as they possibly can across the state. He said collaborative partnerships with various agencies are in effect or are being built to create a state suicide strategy with the goal of reducing suicide attempts and death.

Ohio University College of Health Sciences and Professions Dean Randy Leite shared that the University is doing its part to train the nation’s next generation of mental health professionals.

“Clinicians often encounter mental health clients experiencing crisis; such distress can increase a person’s risk of suicide,” Leite said. “Our college is dedicated to educating the best healthcare professionals in the country and doing everything within our power to help alleviate this serious and growing problem. It is time we recognize suicide as the serious public health issue it is and do all we can to prepare future health and human service professionals to respond to those who may be at risk.”

Area and state officials have taken notice of the University’s training and outreach efforts.

“We cannot thank Ohio University and The Alliance enough for taking the time and resources to produce such a stellar report,” Coder said. “It brings a lot of concern about the rise in suicides over the decade, and it points that the state of Ohio needs to put resources and efforts into solving this public health crisis.”

Joan Englund, executive director of the Ohio Mental Health and Addiction Advocacy Coalition, said that The Alliance’s most recent study shines an important light on a growing need for suicide treatment and prevention services.

“Local, state, and federal decisions and actions can reduce the growing number of Ohio suicides. In order to help change the current upward trajectory, all Ohioans must have timely access to appropriate mental health and substance use disorder prevention, treatment and support services,” Englund said. “This report provides public officials and other community leaders with critical data that can be used to inform strategic and impactful policymaking, support the system of care and target this alarming trend.”

Additional key data points within The Alliance’s study include:

“We need to come together as a field to address this problem,” Coder said. “We know that opiates are a big issue, but with suicide being the second-leading cause of death for individuals ages 10-24, this is a public health crisis in which we need to assign the appropriate resources and manpower.”

Hodges said that The Alliance was thankful for the opportunity to provide increased data-driven context to such an important public health issue.

“We thank the Ohio Department of Health for both providing access to their mortality data and offering vital technical assistance that enabled this study to help identify populations and regions within Ohio experiencing an elevated risk for suicide,” Hodges said.

Additional resources for the study include the Bureau of Vital Statistics, the Ohio Death Certificate File and the Centers for Disease Control.

According to the National Alliance on Mental Illness, warning signs may include threats or comments about suicide, increased alcohol and drug use, aggressive behavior, social withdrawal, dramatic mood swings, talking, writing or thinking about death and impulsive or reckless behavior. If you or someone you know are having thoughts of suicide, contact the National Suicide Prevention Lifeline at 1-800-273-TALK (8255).

Ohio University students, faculty or staff can participate in the Bobcats Who Care training to develop knowledge about suicide and suicide prevention including being able to recognize and offer support for someone feeling depressed, lonely or misunderstood and provide referrals to professional resources. The Ohio Department of Mental Health and Addiction Services offers suicide prevention guidance for Veterans, school-age youth, faith-based groups, older adults and behavioral health providers.

The Buckeye Firearms Association works to emphasize education that encourages suicide prevention and helps to identify potential suicide warning signs; they often collaborate with county and state partners, including Franklin County LOSS and the Ohio Department of Mental Health and Addiction Services, to help share their message.

A complete version of The Alliance’s study is available online.

Visit CHSP's official media page for the latest news and updates, or follow us on Twitter @CHSPOhio.

About The Alliance for Innovation in Population Health
The Ohio Alliance for Innovation in Population Health (The Alliance) is a groundbreaking initiative that focuses on working collaboratively to improve the health of all Ohioans. The Alliance mission is to unite resources and expertise from some of the state’s premier universities, researchers, hospital associations, healthcare providers and public health experts and build collaborations to improve the most complex and pressing health problems in the state.

About the College of Health Sciences and Professions

Ohio University’s College of Health Sciences and Professions (CHSP) is a place where innovative education and research happen every day. Each year, more than 3,600 students graduate from our Athens and Dublin-based campuses prepared to serve as passionate professionals who are ready to change the world. As one of the largest health-focused colleges in the country, CHSP has a growing portfolio of degree and certificate programs housed in six academic units: the School of Applied Health Sciences and Wellness; the School of Nursing; the School of Rehabilitation and Communication Sciences; the Department of Social and Public Health; the Department of Social Work and the Department of Interdisciplinary Health Studies. All six connect faculty and students across multiple disciplines to explore the best approaches to addressing health and wellness in various settings. Find out more at: www.ohio.edu/chsp.

About Ohio University
Ohio University strives to be the best student-centered, transformative learning community in America, where approximately 40,000 students realize their promise, faculty advance knowledge, staff achieve excellence, and alumni become global leaders. OHIO is committed to fostering, embracing, and celebrating diversity in all its forms. Our Athens Campus offers students a residential learning experience in one of the nation’s most picturesque academic settings. Additional campuses and centers serve students across the state, and online programs further advance the University’s commitment to providing educational access and opportunity. Visit www.ohio.edu for more information.