OHIO: The Start of it All for One Alumnus 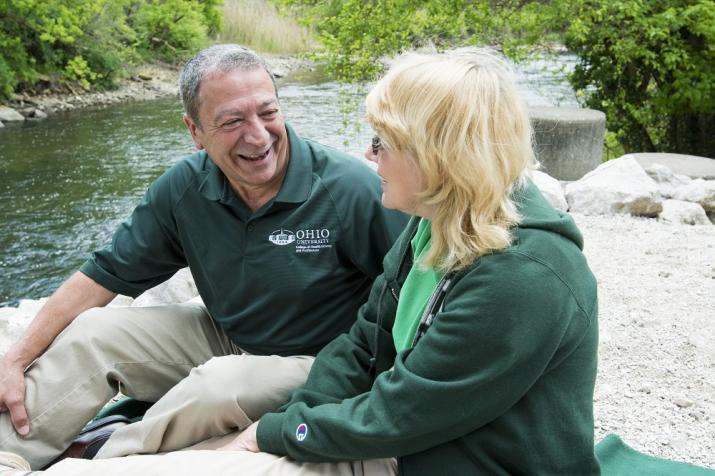 As a young man, Erv Ball made three decisions that set the course of his life: he decided to attend Ohio University, he chose to major in environmental health during the first year it was offered at the University, and he set his sights on LuAnne Borda, a fellow OHIO student majoring in child development.

“She didn’t want to go out with me at first, but I was persistent,” said Erv, who worked for Cuyahoga County Public Health for 28 years before retiring in 2014. “Also, thanks to being pulled aside by my Dad, I knew I had to finish my education and get a job before I could do anything else.”

Erv began as a zoology major in the College of Arts and Sciences but wasn’t sure where that would take him. At about that time, the College of Health Sciences and Professions (CHSP), then known as the College of Health and Human Services, created a new major in environmental health. Erv credits many of those first professors—among them Tom Hart, John Malatinis and Cliff Houk—with providing not just an excellent academic background but also an unmistakable enthusiasm for life as well as for the profession.

Erv finished his degree in 1977, LuAnne finally agreed to marry him and the result—in addition to two children—is that every member of the Ball family graduated from Ohio University, Erv in environmental health, LuAnne in child development, son James in community health services, and daughter Erin in business.

With an entire family of Bobcats, it’s no surprise Erv has continued his involvement with the University, bringing his real-world experience to OHIO’s academic programs and serving CHSP in various capacities: on the Dean’s Advisory Council, as chair of the Environmental Health Sciences Program Advisory Committee, and as president of the CHSP Society of Alumni and Friends from 2002-2005.

“There were many who helped me in my own growth and development as a student,” Erv said. “It only seemed right to do what we could to give back to others. Today’s students already get this, so it’s exciting!”

Sadly, the Balls lost their 23-year-old son James in a tragic accident in 2008. At the time, James was working as an AmeriCorps volunteer with the Athens City-County Health Department, so to honor his memory, the Balls established a scholarship in his name to benefit CHSP students interested in community service.

Both Erv and LuAnne take pride in the scholarship recipients carrying on their son’s legacy and continue to stay engaged with many of them. The whole family also supports the scholarship—most recently by participating in the OhioHealth O’Bleness Race for a Reason on the Athens campus last May.

Erv has also agreed to again serve as president of the Society of Alumni and Friends.

“We are such a large college, and we have so many great CHSP graduates out there,” he said when asked what he hopes the organization will accomplish during his term. “We have the different schools, departments, and divisions doing very different things, which is a real strength, but it sometimes makes it hard for everyone to identify with the college as a whole.”

“Yet, there’s a greater recognition and understanding that good health doesn’t exist in any one given discipline or major,” Erv added. “That’s why I’m glad Dean Leite has championed an interdisciplinary approach to healthcare at the college, with everyone understanding one another’s role as vital to the whole.”

Erv also identified a common denominator in all the disciplines. “What we all have in common—CHSP alumni, faculty, and students alike—is an attitude of caring and a commitment to improving the quality of life in our communities. It’s why our alums are successful, our faculty members are respected, and our students are hired so quickly. It just makes sense that, by combining our efforts and ideas, everyone will mutually benefit.”

Now is the perfect time to get involved with the CHSP Society of Alumni and Friends. As a successful professional and community member, you can contribute to planning and supporting the organization’s services to its members, the college’s students and faculty, and to the community in general. If you are interested in learning more or in joining, please contact Elizabeth Jones, assistant dean for outreach and engagement, at 740.566.0484 or jonese4@ohio.edu.