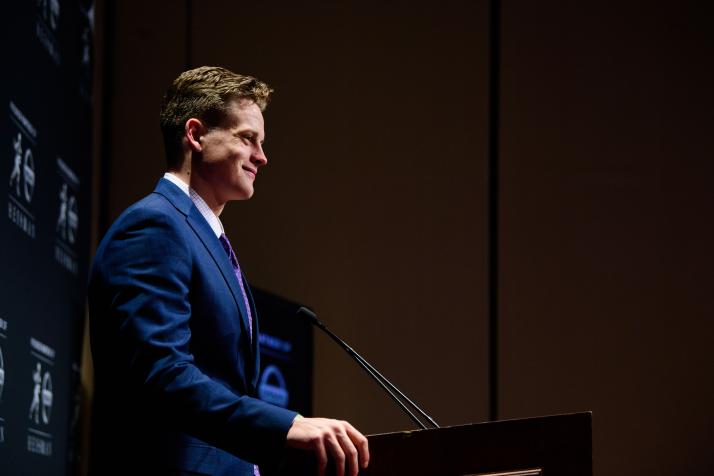 Burrow, the Louisiana State University quarterback and a native of The Plains, Ohio, was named the 85th recipient of the trophy on Saturday, Dec. 14. As he was holding back tears, Burrow thanked his family and coaches for supporting him, and spoke a little bit about the place he calls home.

“Coming from southeast Ohio, it’s a very impoverished area and the poverty rate is almost two times the national average,” said Burrow, whose father Jimmy Burrow was the defensive coordinator for OHIO Football from 2005 until he retired in 2018. “There’s so many people there that don’t have a lot and I’m up here for all those kids in Athens and Athens County that go home to not a lot of food on the table, hungry after school. You guys can be up here, too.”

Drabold, a graduate of Athens High School, took that to heart. He started a Facebook fundraiser for the Athens County Food Pantry that has since gone viral. As of the morning of Wednesday, Jan. 8, more than 13,000 people had donated more than $500,000. The nonprofit food pantry serves about 5,000 households in Athens County each year.

“I started this because like everyone else from Athens, I cried during Joey’s speech and felt like there had to be a way to harness that,” said Drabold, a 2016 OHIO Honors Tutorial College journalism graduate.

Jimmy Burrow said the fundraiser was brought up at the Heisman Gala by ESPN College Gameday host Rece Davis, who emceed the event, as well as the SEC Network’s Peter Burns at another awards ceremony the next night. He said Joe Burrow has talked about the issue of food insecurity in Athens before.

“He’s said something about that before in an article, but it wasn’t this stage. I don’t know how many millions were watching,” Jimmy Burrow said Monday night. “We’re proud of him for how he handled all that.”

Regardless of where Joe ends up in the NFL, Jimmy Burrow says Athens will still be home.

“He’s always going to basically consider Athens his home,” Jimmy Burrow said, adding that when he suggested he and his wife might move to wherever Joe ends up, Joe discouraged it. “He gave me that Joe look and said, ‘Really? I don’t want you to do that. That’s my home.’”

The amount donated to the fundraiser increases every few minutes, with an outpouring of support from people around the country. A majority of those people are from Louisiana.

“Wishing for pounds and pounds of crawfish and gumbo for the kids in Athens County, OH,” wrote Laura Mouget House.

Another person who contributed to the fundraiser, Casey Parker, said in Louisiana, asking, “Did you eat?” is a universal way of saying, “I love you.”

“The holidays are especially tough on food banks and other charitable organizations as need typically outweighs donation,” Parker wrote on the Facebook page. “And if you have the means, please don’t forget about our local food banks that also experience shortages this time of year. Let’s keep showing that love and keep this geauxing, y’all!”

Deborah Murray, senior lecturer in the College of Health Sciences and Professions and Didactic Program director, said the pantry plays a crucial role in the community.

"The Athens County Food Pantry truly stands as the lifeblood to our community in staving off pronounced food insecurity in our region," Murray said. "Solely through donations, fundraisers and grants it has pressed on over the last 35 years with the dedicated mission of chipping away at the estimated 19.3% food insecure statistic in Athens County. Through the provision of nutrient dense food, individual and families are fed so that they can optimally attend school, go to work and take care of their day to day responsibilities. The pantry's impact should forever be recognized and supported by every member of our county wide community."

“I just donated money to Athens Children’s Services through PayPal,” Beth Perry Andrews responded. “Thank you Lesley-Anne for letting us know of this need also.”

The fundraiser has also reached the children of Athens County. Drabold’s wife is a special education teacher at The Plains Elementary School where Burrow went to school. The students watched Burrow’s speech on Monday and were told about the fundraiser.

One third-grade student approached Drabold’s wife and said, “I go to the food bank,” with her eyes beaming.

“She was proud to say that she did,” Drabold said. “She was proud! This is the whole point. This is why I felt motivated to start this after watching Joey’s speech. Joey inspired a generation of children who come from nothing in Appalachian Ohio. Some of these kids don’t get toys for Christmas. They get all their food from food stamps and the food pantry. You cannot beat the power of role models and inspiration in their lives. None of these kids, who are in the same classrooms Joey was, will ever forget this.”

Kathy Fahl, assistant dean of students at OHIO, said the outpouring of support for this issue in the Athens region is significant. Fahl is responsible for serving and supporting OHIO students, particularly those with food and housing insecurity.

“I love the national attention food insecurity is getting because of this wonderful story,” Fahl said. “I see firsthand how food insecurity impacts students on our campus. It is estimated that 36 percent of students at four-year institutions are food insecure, meaning they skip meals to save money, experience physical manifestations of hunger, and/or reduce the quality and amount of food they eat.”

Fahl explained it is not uncommon for students facing these issues to tell her they only eat one meal a day. In college, Fahl said food insecurity can equate to lower grades in school, missing class and sometimes dropping out altogether.

“Our students as well as the broader community benefit from having access to food as well as knowing the care and support for them from across the nation,” Fahl added.

Jimmy Burrow said that while the fundraiser wasn’t planned, he’s glad it got the attention it did and hopes it keeps going.

“Joe never seeks attention, whether it’s football or whatever, but it certainly was in his heart to bring it up.”