Career in MLB started at OHIO for grateful alumnus 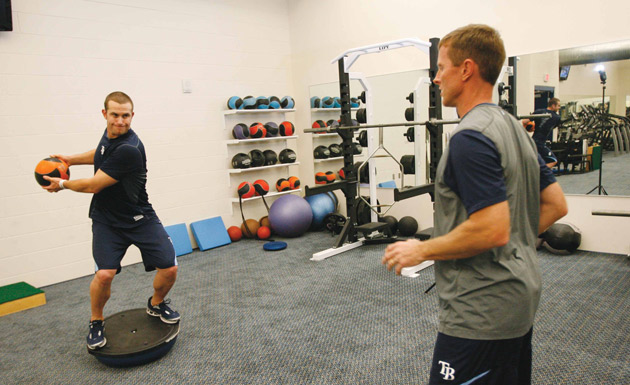 When his baseball team travels near, Kevin Barr makes it a point to travel back to Athens and revisit his alma mater, Ohio University.

Barr, the strength and conditioning coach for the Miami Marlins, has worked in Major League Baseball his entire professional career since graduating from Ohio University’s College of Health Sciences and Professions in 1993.

A native of Athens, Ohio, Barr split his high school days between Athens and Sarasota, Florida, playing baseball in both locations before playing collegiately for the University of Toledo. He finished his exercise science undergraduate degree and completed his master’s degree at OHIO, studying under Tom Murray and Fredrick “Fritz” Hagerman — who were both instrumental in his education and career.

Upon graduation, he connected with alumnus Larry Starr as he departed the Cincinnati Reds and joined the upstart Miami Marlins as the team’s head athletic trainer. Barr joined Hagerman and Starr in Miami for the team’s inaugural spring training and got a taste of Major League Baseball life.

With the conclusion of spring training, Barr contemplated his next career move. That question was answered when he received a call from the Marlins with an internship offer. Fifteen hours later, Barr was in Miami.

“Those doors were opened by Ohio University. No doubt,” Barr said. “Dr. Hagerman, Tom Murray, Larry Starr … all OHIO guys. My career never would have happened this way if it hadn’t been for those guys.”

In October of 1995, Barr was hired by the Kansas City Royals as the strength and conditioning coordinator. Three years later, he accepted a position with the Cincinnati Reds to run the strength training program for their minor league affiliates before rejoining the Marlins for the 2001 and 2002 seasons. Barr spent some time at home with his newborn daughter before accepting a position as strength and conditioning coordinator with the Tampa Bay Rays. During a 14-year tenure with the team, Barr enjoyed a World Series appearance and four playoff runs. In 2017, Barr worked with the Chinese national baseball team, professional track athletes, football players preparing for the National Football League combine, and the Los Angeles Dodgers. The next year, he went back to the Marlins as the minor league strength and conditioning coordinator and, in 2019, he returned to the Marlins’ major league team to oversee both the majors and minors programs.

When asked about his time at OHIO, Barr responded, “If I could go anywhere in a time machine, that’s where I’d be.”

“I enjoyed those classes so much and I was so excited about what I was learning,” he added.

Barr’s father still lives in Athens and when Barr is nearby for games in Detroit, Cleveland, Cincinnati or Pittsburgh, he rents a car and heads straight to Athens.

“It’s the greatest stop on every tour,” Barr said.