Meth and other psychostimulant-related overdose deaths grow by over 5,000 percent in Ohio 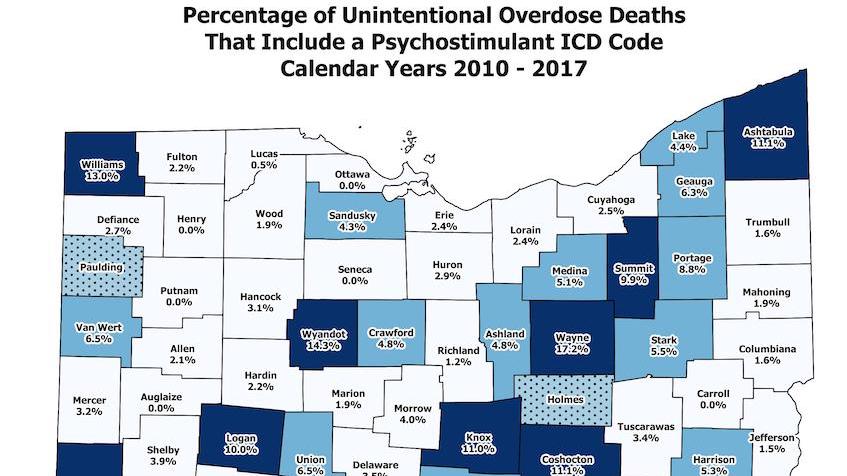 The number of overdose deaths involving methamphetamines and amphetamines in the state of Ohio increased more than 5,000 percent over the course of eight years, according to data collected by the Ohio Alliance for Innovation in Population Health.

The Alliance is a collaboration established by Ohio University’s College of Health Sciences and Professions, the University of Toledo’s College of Health and Human Services and OHIO’s Voinovich School of Leadership and Public Affairs. The Alliance recently completed a review of unintentional overdose fatalities in Ohio from 2010 to 2017 with a focus on the presence of cocaine and psychostimulant drugs such as methamphetamines and amphetamines.

“This research is invaluable because it gives us deeper understanding, and an early warning indicator, in the ongoing drug crisis,” said Rick Hodges, director of the Alliance.

Orman Hall, author of the analysis, noted, “Cocaine (including crack) and psychostimulants have similar effects. Users experience increased alertness as well as intense feelings of exhilaration and euphoria. While addiction to stimulants is common, the recent surge of stimulant-related fatalities in Ohio is concerning.”

Psychostimulants were found in nine unintentional overdose deaths in 2010. That number rose to 509 in 2017, a staggering increase of 5,556 percent.

Dennis Lowe, commander of the Major Crimes Unit that serves Athens, Hocking and Fairfield counties, said in response to the analysis’ results, “Based on what we’re seeing on the streets, I’m not surprised.” Lowe guessed that many of those deaths also involved the opioid fentanyl and he was correct.

The data showed Wayne County with the highest percentage of overdose deaths from 2010-2017 that included a psychostimulant with 17.2 percent followed by Pike County with 14.5 percent and Wyandot County with 14.3 percent.

Franklin County had the highest percentage of overdose deaths from 2010-2017 that included cocaine with 36.1 percent. Seven other counties had more than 30 percent of overdose deaths involving cocaine: Cuyahoga, Lorain, Mahoning, Clark, Darke, Ross and Hamilton.

“These serious findings in Ohio are part of a rapid national escalation in the supply of, demand for, and deaths from stimulants,” said John Eadie, public health and prescription drug monitoring program project coordinator for the National Emerging Threats Initiative (NETI), a National High Intensity Drug Trafficking Areas (HIDTA) Program. “Law Enforcement agencies across the country are seizing larger and larger quantities of cocaine and methamphetamines that are being trafficked for illegal use and physicians and other prescribers are increasing the prescribing of stimulants like amphetamines and methylphenidate, more and more of which are being diverted into illicit use.”

“It’s an alarming trend,” Lowe said in reaction to the analysis. “Drug cartels are using fentanyl and fentanyl analogs as cutting agents with things like cocaine and methamphetamine. That’s disturbing. There are people out there purchasing what they think is straight cocaine or straight methamphetamine when it in fact contains something that very likely will kill them.”

“They’ve almost single-handedly eliminated meth labs in the state of Ohio. We see one every few months now where we used to seize over 100 in a year,” the commander said. “People are getting a better quality product and it’s cheaper to buy from a cartel.”

Lowe said that locally and across Ohio the trend is that opiate use “has kind of gone underground and methamphetamine and cocaine are charging to the front.” Reports from the Ohio Department of Health echo that statement as opioid and heroin overdose deaths are currently at a four-year low.

A number of factors have led to the trend including law enforcement’s multi-year focus on opioids, legislation restricting the prescribing of opioids by physicians, drugs such as naloxone and vivitrol and an increase in treatment programs. Lowe noted that law enforcement can also be limited when combatting drugs other than opioids due to federal and state funding that is earmarked exclusively for opioid responses. Nonetheless, Lowe said the task force works through outreach programs to try to connect people to treatment and prevention programs regardless of the drug use.